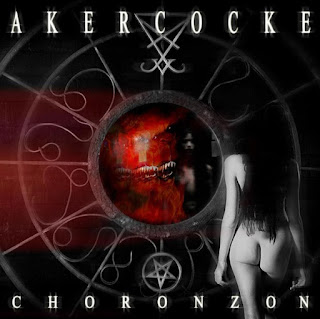 Akercocke are a band from England that plays a mixture of black metal,death metal and atmospheric symphonic metal and this is a review of their 2003 album "Choronzon which was released by Earache Records.

Drums are mostly fast with a lot of blast beats while the synths are very dark and avant garde sounding which gives the music a more satanic edge, as for the bass playing it is all rhythm bass that follows the riffs coming out of the guitars and at times they have a very powerful sound.

Vocals are a mixture of deep death metal growls mixed in with some high pitched black metal screams with some clean singing vocals as well as spoken word parts, while the lyrics are very satanic with some Thelema, Sex Magick, Goetia and Enochian as well as anti christain elements, as for the production on this album which was recorded at Goat Of Mendes Studios sounds very professional and you can hear all of the musical instruments that are present on this album.

In my opinion Akercocke are a very talented and original band and this was a great album from them, if you are a fan of avant garde black/death metal you should this album to your collection. RECOMMENDED TRACKS INCLUDE "Praise The Name Of Satan" "Valley Of The Crucified" "Bathykolpan Avator" and "Scapegoat". RECOMMENDED BUY

Posted by OccultBlackMetal at 4:28 PM No comments: