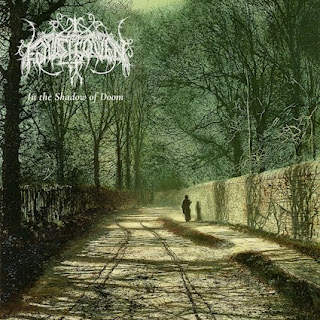 http://nuclearwarnowproductions.bandcamp.com/album/in-the-shadow-of-doom
Posted by OccultBlackMetal at 5:05 PM No comments: 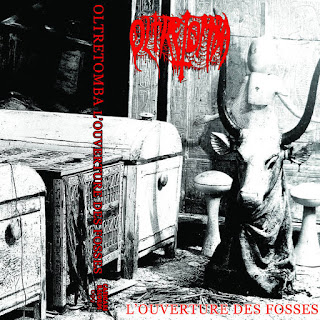 Oltretomba  plays  a  musical  style  that  mixes  black  and  doom  metal and  mixes  them  together  to  create  a  sound  of  their  while  keeping  everything  in  a  slower  direction,  the  production  sounds  very  dark  while  the  lyrics  are  written  in  Danish  and  cover  Egypt,  Occultism,  Surgery  and  Death  themes.

https://caligarirecords.bandcamp.com/album/louverture-des-fosses
Posted by OccultBlackMetal at 11:43 AM No comments: 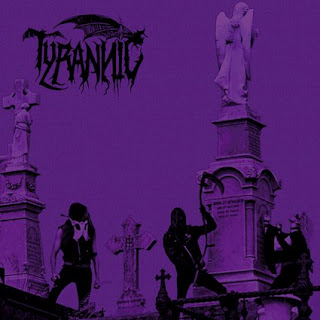 Tyrannic  plays  a  musical  style  that  takes  black,  doom,  death  and  thrash  metal and  mixes  them  together  to  create  a  sound  of  their  own,  the  production  sounds  very  old  school  while  the  lyrics  cover  death  and  desolation  themes.

Posted by OccultBlackMetal at 6:50 PM No comments: 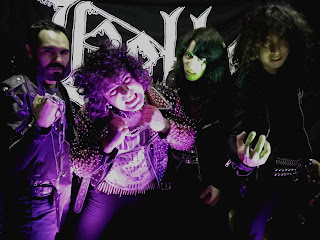 The album was finished recording at the beginning of February, and the final master was finished at the beginning of March. Since then, the band has participated in several gigs, one of the most important being the "Evil Confrontation Festival Open Air" where we participate with bands from Latin America and others like Angel Witch, Demmolition Hammer, Bolzer, Tribulation, among others.

2.You have a new album coming out in July, how would you describe the musical sound that is presented on the recording and also how does it differ from the stuff you have released in the past?

Compared to the sound of our first works, we believe that the sound achieved in "The Spectre of Lonely Souls" is much darker, faster and more damned. We are always listening to new bands from different styles and we believe that this has helped us a lot to make compositions more elaborate and polished to a new extreme. In this album we have added a little more melodies to our riffs, sometimes making time changes, and we have also looked for a cleaner sound but without losing the rawness that has identified us in our demos and first album.

3.Most of the music is very heavily rooted in the 80's, do most of the band members prefer the classic era of metal to the more modern era?

We are all metal fans at all times, but without a doubt, we prefer the decade of the 80s. However we like several current bands that are making very good metal obviously influenced 100% by the 80s.

4. A lot of your lyrics over the years have covered Satanism, Occultism and Ancient Beliefs, can you tell us a little bit more about your interest in those topics?

As a group, we have always been interested in all that lost and hidden knowledge. We believe in the ultraterrestrial forces and in the constant balance between light and darkness. On the other hand, we live in a land full of mythology and legends, we are from a province out of Santiago, and it has been known since the Spanish conquest as a land of witches; therefore, we wanted to rescue part of the folklore of our land.

5.What is the meaning and inspiration behind the name 'Hellish'?

The name "Hellish" was born as a consensus when forming the band. We wanted to do something energetic and dark, therefore we needed a name that reflected our passion for shadows and the old sound. The name was born spontaneously.

6.Can you tell us a little bit more about the cover artwork that is presented on the new album cover?

We work with "Visceral," a well-known artist in Chilean underground metal, because he has worked with several bands. The art is the perfect mix of what we wanted to represent in music, in lyrics, and in the general concept of the new album. We put the idea to him generalized and in detail, and "Visceral" had total freedom to interpret it. And we believe that he did it perfectly, achieved what we wanted as art for the album.

Well it is very difficult to remember each one of the presentations. Since 2010 we have been doing shows and we have not stopped. We believe that each of the shows has something special; we always try to do our shows with the greatest energy and passion that's possible, it is what we like to do. As I said before, one of the most important shows was the "Evil Confrontation Festival Open Air" since we had the honor of participating with great bands from the national, Latin American and historical world metal expos.

Currently we have no tour considered, but we have scheduled several gigs for this year and next.

9.On a worldwide level how has the feedback been to your music by fans of black and thrash metal?

We have received very good reviews from many critics of different countries - that is something that makes us happy as it gives us more courage to continue with our work. Though many of those appreciations are made by people who do not have musical abilities, and all the knowledge of metal they possess will never be able to express it through their own music.

Cristian and I (Francisco) are active with Armored Knight (heavy / speed metal) - we will soon release new material, and we have some gigs scheduled. Necromancer is currently with a new project called "Delirium" which is post-punk, and Noctumbra is the leader of Parkcrest (power thrash metal) will soon enter the studio to record their second album.

We have never considered what we want to do in the future, or what sound we want to achieve, or what variations we want to make in our compositions. The band has been characterized by spontaneous and constant work. If we talk about what we want in the future, it is simply to continue with our music, which I do not think will change drastically because we have always been consistent with our work, obviously evolving but without changing the style.
We would be glad to play out of Chile, but we haven't have the opportunity.

We are faithful fans of thrash and heavy metal, but as far as Hellish is concerned, the main influences are Slayer, Kreator, Sodom, Destruction, Violent Force, Assassin, Bathory, Possessed, and Exorcist (Poland). Lately, the last record of Antichrist (Sweden) has caught our attention.

13.What are some of your non-musical interests?

First of all, we are very happy for the reception that the new album has had; we have played live songs from the album and the response from the audience has been great. We are very excited and encouraged with this. On the other hand we are already working on new Hellish material - we are in the process of composition, we believe it will be an EP which people will enjoy a lot.
https://unspeakableaxerecords.bandcamp.com/album/the-spectre-of-lonely-souls
Posted by OccultBlackMetal at 9:15 PM 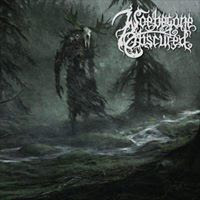 Nature  sounds  start  off  the  album  along  with  some  heavy  riffing  a  few  seconds  later while  clean  playing  is  also  utilized  at  times  along  with  the  slower  sections  of  the  songs  being  very  heavily  rooted  in  funeral  doom  metal  as  well  as  some  atmospheric  synths  being  mixed  in  the  heavier  sections  of  the  songs.

On  this  recording  Woebegone  Obscured  expand  on  their  blackened  style  of  funeral  doom/death  metal  by  adding  in  more  elements  of  ambient  and  progressive  rock,  the  production  sounds  very  professional  while  the  lyrics  cover  dark  nature,  occultism,  melancholy  and  suicide  themes.

https://www.youtube.com/watch?v=hfiBs8lrmHo
Posted by OccultBlackMetal at 6:05 PM No comments: 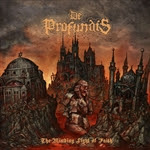 United  Kingdom's  De  Profundis  have  returned  with  a  new  recording  which  continues  their  progressive  form  of  blackened  death  metal  and  this  is  a  review  of  their  2018  album  "The  Blinding  Light  Of  Faith"  which  was  released  by  Transcending  Obscurity  Records.

De  Profundis  creates  another  recording  that  remains  true  to  their  progressive  mixture  of  black  and  death  metal,  the  production  sounds  very  professional  while  the  lyrics  cover  anti  Abrahamic  religion  themes.

Posted by OccultBlackMetal at 7:21 PM No comments: 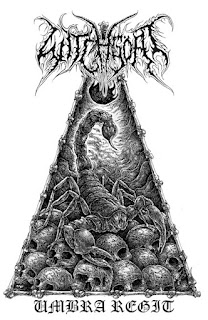 https://morbidskull.bandcamp.com/album/umbra-regit-demo
Posted by OccultBlackMetal at 6:49 PM No comments: 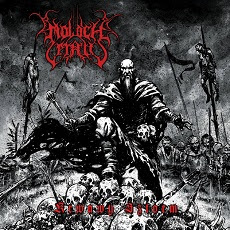 Posted by OccultBlackMetal at 6:05 PM 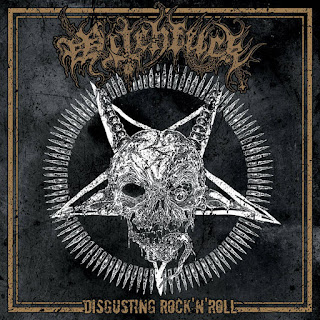 Witchfuck  plays  a  musical style  that  takes  black,  thrash  metal  and  punk  and  mixes  them  together  to  create  a  sound  of  their  own,  the  production  sounds  very  old  school  while  the  lyrics  cover  violence,  alcohol,  sex  and  blasphemy  themes.

Old Temple
Posted by OccultBlackMetal at 4:51 PM No comments: 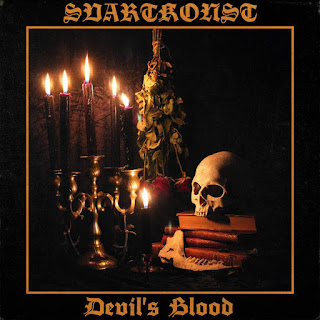 Svartkonst  plays  a  musical  style  that  takes  black  and  death  metal  and  mixes  them  together  to  create  a  very  dark  sounding  recording,  the  production  sounds  very  professional  for  being  a  self  released  recording  while  the  lyrics  cover  occultism,  darkness,  death  and  disease  themes.

Posted by OccultBlackMetal at 8:24 PM No comments: 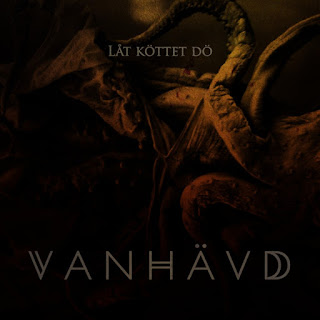 Vanhavd  plays  a  musical  style  that  takes  an  atmospheric  form  of  funeral  doom  metal  and  mixes  it  with  black  metal  to  create  a  sound  of  their  own,  the  production  sounds  very  dark  and  heavy  while  the  lyrics  are  written  in  Swedish  and  cover  visceral  and  existential  horror  along  with  some  inspirations  from  the  writings  of  Norwegian  antinatalist  philosopher  Peter  Wessel  Zaphe  and  horror  author  Thomas  Liggotti.

Posted by OccultBlackMetal at 8:23 PM No comments: