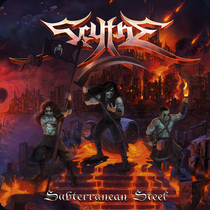 "Subterranean Steel"  begins  with  some  slow  guitar  riffs,  drums  and  Hellhammer  style  grunts  before  going  into  some  high  pitched  black  metal  screams  and  as  the  song  moves  on  the  riffs  get  more  diverse  as  well  as  mixing  in  some  deep  growls  which  leads  to  a  faster  direction  along  with  some  blast  beats  and  after  awhile  there  is  a  brief  guitar  lead  being  utilized  which  also  leads  to  some  powerful  bass  guitars  and  heavier  riffs.

Song  lyrics  cover  horror,  supernatural  and  occult  themes,  while  the  production  has  a  very  dark, heavy,  powerful  and  old  school  sound  where  you  can  hear  all  of  the  musical  instruments  that  are  present  on  the  album.

Mulciber/Cries From Below/2013 Full Length Review 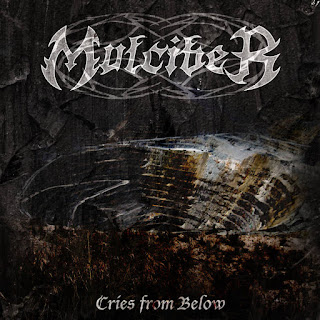 "Enshrouded  In  Misery"  begins  with  a  dark  and  melodic  guitar  riff  along  with  some d rums  coming  in  shortly  after  that  and  then  the  fast  and  heavy  guitar  riffs  and  blast  beats  start  kicking  in  while  also  keeping  around  the  melodic  elements  and  a  minute  later  it  goes  into  a  clean  direction  briefly  before  getting  heavy  again.

"Apoptosis"  is  all  guitar  amplifier  drones  and  noises  and  this  song  serves  as  an  instrumental.

"Berserker"  begins  with  some  slow,  heavy  and  dark  guitar  riffing  along  with  some  drums  before  going  into  a  faster  direction  along  with  some  blast  beats  and  growls  and  after  awhile  the  song  starts  switching  back  and  forth  between  slow  and  fast  parts  as  well  as  throwing  melody in  certain  parts  of  the  riffing.

Posted by OccultBlackMetal at 11:08 PM No comments: 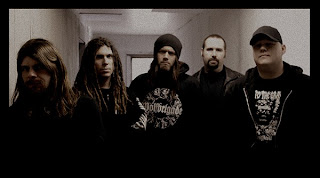 1. For those that have never heard of you before, can you tell us a little bit about the band?
Sure, Soul Remnants is a band with its roots embedded in the old school. I don't think we sound very old school, I mean, the production we get is clean and modern with enough filth to make it work, but we keep the philosophy of proper old school metal in mind. It's mostly death metal, if I had to put a label on it, but there's a strong dose of thrash and black metal in there.

2.So far you have released one full length and a demo, can you tell us a little bit more about the musical sound that is present on the recordings?

The demo was just a raw live recording. Very few overdubs and just a couple full band takes. The songs on the demo were just unrefined versions of tunes that would be on our debut album. When Plague of the Universe, our first full length, came out in 2009 we were very pleased with the result. The album is heavy, and sludgy at times. People tell me it has a doom metal feel, which I was surprised by, but I guess sometimes you don't realize what you have created until you step back and look at the big picture. It's a fast album, but not as fast as Black and Blood, our new record. Black and Blood is definitely our speed metal masterpiece so far. I just wanted to push the boundaries of what we had created, and through the years we have been able to get there. The dark theme of the band has remained intact which is a pretty strong philosophy of mine. What's good about the music, is it isn't just fast. There are slow, melodic, and epic moments to keep the experience interesting. The music of Soul Remnants is always going to be changing, we can't make the same album twice, but the point of the music will remain. You will always know it's us. Honestly, the third full length is almost done being written, and it's coming out really great and different from Black and Blood, so I can see that this journey is going to continue and keep getting better.

3.What are some of the lyrical topics and subjects the band has covered and explores over the years?

We cover a lot. The lyrics are split up between myself and Mitch, our vocalist. Mitch writes a lot more of the lyrics than I do, I mostly write all the music. I have written about friends dying from drug addictions, people I know being sent to insane asylums, or just fucked up personal relationships filled with rage, pain and hate. Man, real happy stuff. Mitch writes in a more abstract style than I do, and I really like that. You can read his lyrics and wonder, "is this some fucking crazy horror gore rant, or is there a deeper meaning?" I think everyone can get something different from what we write about, but it's some extreme stuff that a lot of people won't be able to digest, haha.

4.Can tell us what inspired you to name the band Soul Remants?

Yea, it was the title to a song I wrote when I was 18. We don't play the song, never have, but the guitar player I was jamming with at the time suggested we start a new band and call it Soul Remnants. I didn't like the name at first, but it stuck-- the usual story, right? As far as meaning goes, it's about self empowerment. I am not and never have been a religious person, but for example, if you were to look at someone with blind faith following a church, giving hard earned cash over to them, I think that person is insane. I'm saying they are spiritually beat down, and what little is left would be the remnants of a soul. That's where they still have some strength and have the potential to wake up.

5. What are some of the best shows that the band has played in its 6 year existence and also how would you describe your stage performance?

Well, we have actually been a band for 10 years now. We have been fortunate enough to play with some bands that really kick ass like Lockup, Deceased, and Rotten Sound which is obviously a blast, but some of the best shows are the underground DIY ones too. BYOB and all, you know? People fucking going nuts all night, definitely the way to do it! We take our live show extremely serious. We don't fuck around when it comes to pulling off every part with tightness.
6. Are there any touring or show plans for the new album?

We are going to be playing one off shows here and there. We all have jobs and need to pay bills, and where we are at, we can't necessarily afford a full on tour. A week here or there is probably the most "touring" we are going to be doing unless of course, this album hits number one on the billboard charts. We are going to try and get out as much as possible for fests and shows that are worth it.

7. On a worldwide level how has the feedback been to your music by fans of black and death metal?

I'm probably opening the flood gates in saying this, but we have never got a negative review. We sent Plague of the Universe all over the world when we released it back in 2009, and it's got universally positive reviews. That's all I have to go on. At shows, we get a lot of great responses so we look forward to unleashing the rest of our music on the masses. This band strikes a chord with a very specific type of metal fan, and that's what I'm looking for. I'm not about mass appeal, just making the stuff I would want to hear for other people who "get it."

I'm in a heavy metal band with Chad from Soul Remnants, called Armory, and our second full length is coming out soon. It's called Empyrean Realms, and is the result of about six years in the studio. It's almost unbelievable that it's actually gonna come out, it has taken forever. I was in another band called Forced Asphyxiation with our bass player Ryan. Their full length is almost done in the studio. I had to quit that band due to time commitments but they are my brothers still. I helped them a lot with the recording of the album and will probably still track guitar solos on the record. On top of that, I have been helping out a one man atmospheric black metal "experience" called Cryostasium. I'm playing guitar in the project, and I call it an experience because if you met the guy behind it, it is a fucking experience. That's all I can say about that.

9.What direction do you see your music heading into on future releases?

Well, I can say since the third album is being written and is almost done, it is going to be a natural progression. There is a black/thrash metal vibe to a lot of it and kind of a crossover feel. It's different enough to be interesting but still sounds like Soul Remnants. All we want to do is make sure we are getting better with every step.

10.What are some bands or musical styles that have influenced your music and also what are you listening to nowadays?

My biggest influences are Slayer, Death, Dissection, Mercyful Fate,Immortal, Iron Maiden, Hypocrisy, Pantera, Megadeth, and Metallica off the top of my head. I used to just learn their songs when I was a kid, and that's what really taught me how to play. I am also very into Frank Zappa, the guy was amazing. But, yea, I would just learn the songs I like and jam with different people too. I would jam with rock musicians, jazz musicians and anybody who wanted to. You can learn a lot of really cool tricks that way, and then soon enough develop your own style. Nowadays, I'm still listening to the old stuff mostly. I do really like the new Phil Anselmo solo record, though. I just throw the ipod on random a lot, but aside from the above mentioned, you can never go wrong with Strapping Young Lad, Faith No More, Cannibal Corpse, Carcass or Suffocation. Basically, if it's good and it's real, I'm going to listen.

11.Outside of music what are some of your interests?
I like to paint and draw sometimes or cook. I still hang out with my friends and just rip it up, so if that counts, then there you go. Honestly, music is my main passion in life right now and that's where a lot of my focus lies. If I'm not home with my girl and kid, then I'm probably jamming somewhere.

12.Any final words or thoughts before we wrap up this interview?
First, thanks for taking an interest in what we do, we appreciate it. Soul Remnants isn't going to be stopping anytime soon so you should go look us up on facebook @ www.facebook.com/chopwork so you can keep up and enjoy the ride. That's also how you can find out how to get your hands on our cds! Fuckin' right!