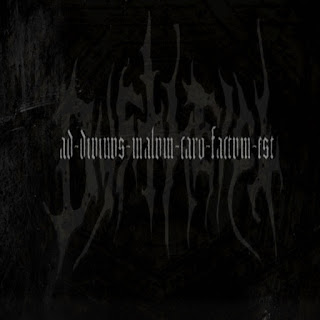 Dystheist  plays  a  style  of  blackened  death  metal  that  is  very  dark  and  heavy  sounding,  the  production  sounds  very  professional  while  the  lyrics  are  written  in  Latin  and  cover  dark  and  occult  themes.

Posted by OccultBlackMetal at 2:51 PM No comments: 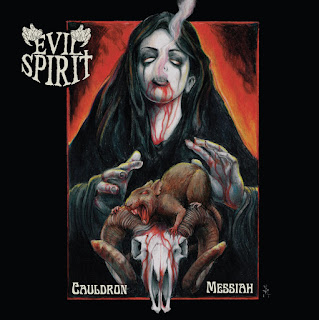 Evil  sounding  keyboards  start  off  the  album  along  with  some  clean  singing  vocals  and  after  a  few  seconds  the  music  goes  into  a  heavier direction  along  with  some  high  pitched  screams  that  are  black  metal  influenced  and  all  of  the  musical  instruments  have  a  very  powerful  sound  to  them  and  you  can  also  hear  some  dark  sounding  melodies  in  the  riffs.

https://www.facebook.com/EvilSpirit.Punishment
Posted by OccultBlackMetal at 7:22 PM No comments: 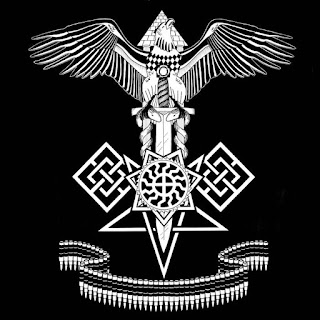 Traitorr  plays  a  musical style  that  takes  black,  death  and  thrash  metal  and  mixes  them  together  with  a  touch  of  melodic  metal  to  create  a  style  of  their  own,  the  production  sounds  very  powerful  while  the  lyrics  cover  war,  social  unrest,  ritual  sacrifice,  science  fiction  and  apocalypse  themes.

http://traitorr.bandcamp.com/
Posted by OccultBlackMetal at 6:18 PM No comments: 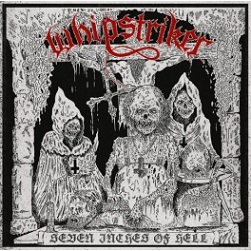 Whipstriker  plays  a  musical  style  throughout  this  compilation  that takes  first  wave  black  metal,  thrash,  speed,,  crust  punk  and  rock'n'roll  and  mixes  them  together  to  create  some  very  retro  yet  old  school  music,  the  production  sounds  very  old  school  while  the  lyrics  cover  war,  darkness,  violence  and blasphemous  themes.

Posted by OccultBlackMetal at 10:12 AM No comments: 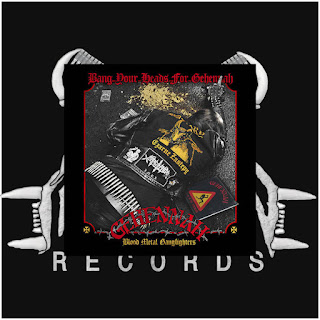 
Posted by OccultBlackMetal at 7:18 AM No comments: 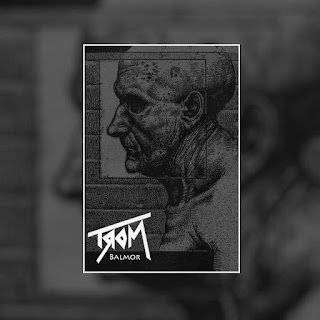 Posted by OccultBlackMetal at 8:55 AM No comments:

1.Can you give us an update on what is going on with the band these days?
Hello, we’re Liquid Graveyard. We’ve about to release our latest album, the first one as a Supergroup, and will play some gigs to promote it fully.

2.Recently you have released a new album, how would you describe the musical sound that is presented on the recording and also how does it differ from the stuff you have released in the past?
We play a mix of Death Metal, Grindcore and Thrash, with some Doomy elements as well as Black Metal, probably…It’s totally different to our previous albums in many aspects, but a very important one is that we’ve got Shane playing some awesome bass lines, and Nick with his unique drumming…the whole album is a blast, we’re very proud.

3.This is the first album to be released in 5 years, can you tell us a little bit more about what has been going on during that time frame?
We played in Stonehenge Metal Fest in Holland in 2013, where we met up with our mates Shane from Napalm Death and Nick from Lock Up, Brujeria etc.. we talked about doing an album together… one year later we had the album completely written and ready to be recorded which we did. The release has  taken a while due to personal circumstances (John started Cancer again in 2013 which has kept him very busy… both Shane and Nick are also very busy with their other bands…) but during that time we started to play together, first one show, then another, and another… and here we are.

4.What are some of the lyrical topics and subjects the band explores with the newer music?
Same as it’s always been really. There are too many issues in the world, plenty to talk about and write about. We’re always been very political. I very much doubt we’ll ever write a love song!

5.Most of the band members are veterans with histories that go back more than 20 years, what is it that keeps motivate to still  write, create or perform music up to this day?
We’re musicians, we’re passionate about what we do and life has given us the chance to create music rather than to just “consume” music so to speak. So we consider ourselves lucky and we’re grateful of course.

6.What are some of the best shows that the band has played over the years and also how would you describe your stage performance?
There are three that I particularly recall as really good ones, November to Dismember in Bucharest, Stonehenge in Holland, and Neurotic Deathfest in Holland.

7.Do you have any touring or show plans for the new album?
We will do shows to promote the album, as we always have.

8.On a worldwide level how has the feedback been to the newer music by fans of extreme metal?
By the looks of it, it’s going really well. Let’s wait till the album is out!

9.What is going on with some of the other bands or musical projects these days that some of the band members are a part of?
Oh plenty of things, shows, tours, new albums… many, many things..

10.Where do you see the band heading into musically during the future?
I can’t say! We enjoy doing music, that’s for sure, so we will continue for as long as we can.

11.What are some of the bands or musical styles that have had an influence on your newer music and also what are you listening to nowadays?
Cancer, Napalm Death, Brujeria, Lock-Up, Brutal Truth, Twilight Of The Gods, Vicious Rumours, Menace, Tryptikon, Mumakil and also Skinny Puppy, Black sabbath, Alice in Chains, Tool, S.U.P./Supuration, Zaraza (Canada), Aarni, Carnival In Coal, Antique (Greek doom band), My Dying Bride, Blut Aus Nord, Deathspell Omega..

12.What are some of your non musical interests?
Gosh! There’s a lot: Politics, Science and Technology, History, especially Medieval, and literature.


13.Before we wrap up this interview, do you have any final words or thoughts?
To the fans: thanks for making it possible, thanks for being there.

Posted by OccultBlackMetal at 3:14 AM No comments: 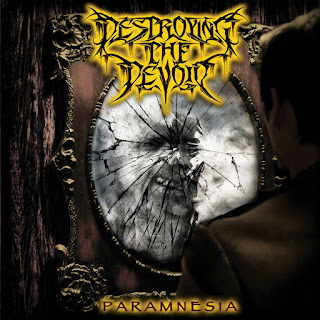 Destroying  The  Devoid  plays  a  musical  style  that  takes  the  progressive  and  blackened  styles  of  death  metal  and  mixes  them  with  some  orchestra  elements  to  create  something  very  original,  the  production  sounds  very  professional  while  the  lyrics  cover  dark  themes along  with  the  last  3  tracks  having  a  concept  to  them.

http://www.facebook.com/destroyingthedevoid
Posted by OccultBlackMetal at 9:06 AM No comments: 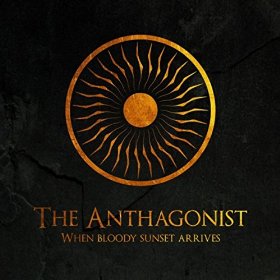 The  Anthagonist  plays  a  style  of  blackened  death  metal  that  is  very  brutal  while  also  being  very  technical  at  the  same  time,  the  production  sounds  very  professional  while  the  lyrics  cover  dark,  occult  and  evil  themes.

Posted by OccultBlackMetal at 9:31 AM No comments: 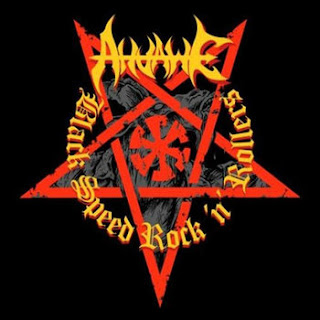 Ahvawe  creates another  track  that  takes  the  first  and  second  wave  styles  of  black  metal  and  mixes  in  speed  and  thrash  elements  to  create  some  music  that  is  very  retro,  the  production  sounds  very  old  school  while  the  lyrics  cover  heavy  metal  and  rock'n'roll  themes.

Posted by OccultBlackMetal at 10:07 PM 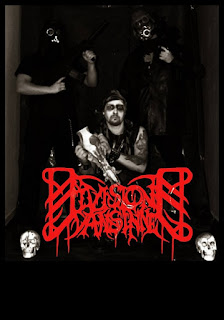 1.For those that have never heard of you before, can you tell us a little bit about the band? Answer: Division vansinne was created in 2008 with the purpose to make olddeath/blackmetal from the 90s and try to combine the best from both genre. Some of us from the band are from the old scene and had a vision to create the old feeling again.

2.Recently you have released an album, how would you describe the musical sound that is presented on the recording? Answer: Death/blackmetal from the early 90s.Extreme with other words.

3.What are some of the lyrical topics and subjects the band exploreswith the music? Answer: I would say Demonical , pain , torture war and death. As it should be I guess.

4.What is the meaning and inspiration behind the name 'Division Vansinne'? Answer: It cant be so hard to get it. “Division Insane” mentally fucked band members.

5.What are some of the best shows that the band has played so far and also how would you describe your stage performance? Answer: We have not made so many gigs. The ones we couldn’t have blood on stage was worthless.

6.Do you have any touring or show plansfor the future? Answer: No. The band is splitup recently but I guess some of us will continue with other projects/Soloprojects as well.

7.The album was released on 'Black Lion Productions', are you happy with the support they have given you so far? Answer:No problems so far. As always it’s a lot of work and sometimes takes longer time then expected but that is nothing strange at all.

8.On a worldwide level how has the feedback been to your music by fans of black and death metal? Answer: Don’t really know yet about this album but what I heard so far people are satisfied with the material.

9.Where do you see the band heading into musically during the future? Answer: Nowhere but as the members are from a shitty planet I guess the inspiration for more brutal recordings will catch our lives sooner or later.

10.What are some of the bands or musical styles that have had an influence on your music and also what are you listening to nowadays? Answer: Can only speak for myself in this question but I would say mostly from the 90s and a very twisted mind.

11.Does Satanism or Occultism play any role in your music? Answer: No comments
.
12.Before we wrap up this interview, do you have any final words or thoughts? Answer: Buy the record and understand pure black/deathmetal.

Posted by OccultBlackMetal at 8:32 PM No comments: 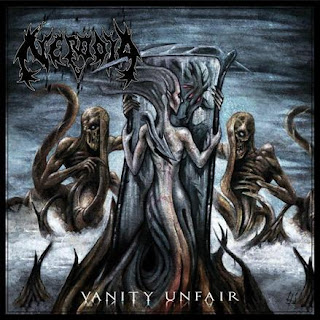 Nerodia  plays  a  musical  style  that  takes  black  metal  and  thrash  and  mixes  them  together  with  a  more  modern  track  and also  adding  in  touches  of  punk  and  death  metal  to  create  a  very  heavy  musical  sound,  the  production  sounds  very  professional  while  the  lyrics  cover  Occultism,  Darkness  and  Ant  Human  themes. 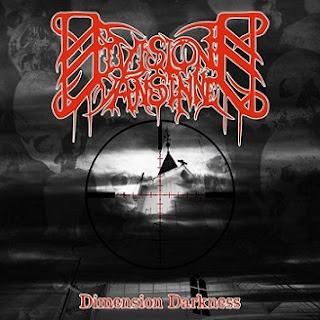 Atmospheric  sounding  synths  start  off  the  album  and  after  a  few  seconds  demonic  vocals  are  added  onto  the  recording  and  spoken  word  parts  can  also  be  heard  briefly  and  after  the  intro  the  music  goes  into  a  heavier   black  metal  direction that  also uses  a  decent  amount  of  blast  beats  and  tremolo  picking. 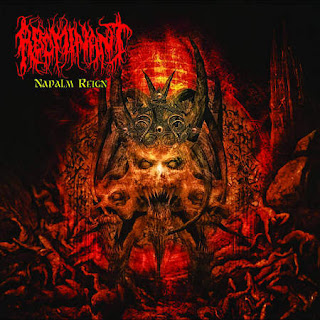 War  sounds  start  off  the  album  before  going  into  a  very  fast  and  brutal  direction  which  also  introduces  blast  beats  and  high  pitched  black  metal  screams  onto  the  recording  along  with  some  morbid  sounding  melodies  and  after  awhile  death  metal  growls  make  their  presence  known  on  the  recording.

Abominant  creates  another  recording  that  remains  true  to  the  blackened  death  metal  sound  of  previous  recordings  while  also  adding  in  more  speed  and  thrash metal  elements  as  well  as  expanding  on  the  black  metal  influences,  the  production  sounds  very  professional  while  the  lyrics  cover  war,  darkness,  and  evil  themes.

Posted by OccultBlackMetal at 9:03 PM No comments: