1. Can you tell us a little bit about this project for those that have never heard of you before?


Doomsday is a crusty/death metal project we decided to form based on the desire between Zack, Jon and I to continue writing together after we stopped working with our previous band. Bob and Zion being mutual friends were added to round out the lineup.

I had no involvement as far as lyrical content, but the music called for raw, aggressive subject matter. Zion is fantastic in annunciation and I think a lot of the lyrics are fairly easy to decipher for anyone that's interested in learning them.

The majority of us were involved in the Doomsday Derelicts era of Nachtmystium. We had thrown around a couple of other ideas, but this was one that seemed to click with everyone.

5. What are some of the best shows that the band has played so far and how would you describe your stage performance?

6. Do you have any touring plans for the new release?

We just finished up a week and a half or so in support of Krieg and Wolvhammer that took us around the midwest and east coast. At the moment, we have no more plans to play live until we're finished with our respective duties in other projects.

7. Currently you are signed to Disorder Records, how did you get in contact with this label and how would you describe the support that they have given you so far?

I started Disorder just prior to releasing the EP, I didn't really have any intention of trying to sign this band to a label at all. We've all been around long enough and we know enough people. There's really no reason for us to hand anything off to a label for pocket change.

I'm working on a goth record under the title of Liar In Wait as well as material for new Chrome Waves and Wolvhammer releases that are scheduled for the first half of next year. Jon is working on writing a new Bones record that will more than likely come out on Planet Metal next year. Zion has a full length of Anti-Human Thesis songs ready to record. Bob is always doing a million things with Apostle of Solitude, Gates of Slumber, etc. and Zack is starting another leg of Goatwhore touring as we speak. Always a lot going on around here, there's never a lack of work or creativity.

9. What direction do you see your music heading into on future releases?

Well, we did start a couple of other songs a few months ago, they aren't finished, but they seem to be in the same vain as the others, just a little slower. Not that we're going to stop going fast, just wanted to mix things up a little.

10. What are some bands or musical styles that have influenced your music and also what are you listening to nowadays?

I think this obviously just depends on the project, you can't really pigeonhole any of us when it comes to influences. They're far reaching and varied. For Doomsday in particular, I guess you could say Autopsy, His Hero is Gone and the like.

11. Outside of music what are some of your interests?

Is there anything else? I really don't have much free time these days...

12. Any final words or thoughts before we wrap up this interview?

Thanks for the questions, check out the record, and buy it so we can keep these things happening.

Posted by OccultBlackMetal at 4:27 PM No comments: 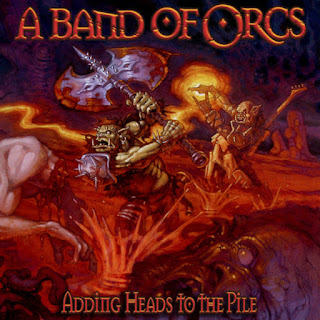 Vocals range  from  death/thrash  style  shouting,  deep  death  metal growls  and  high  pitched  black  metal  screams,  while  the  lyrics  cover  elves  and  trolls  with  a  touch  of  Anglo  Saxon  Mythology,  as  for  the  production  it  has  a  very  strong,  powerful,  heavy  and  professional  sound  to  it.

http://www.youtube.com/watch?v=RwbzulsQePM&feature=plcp
Posted by OccultBlackMetal at 3:45 PM No comments: 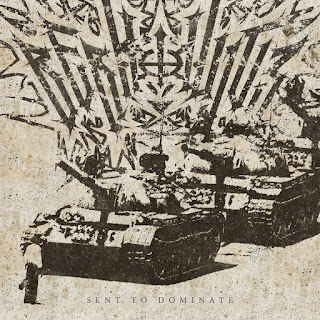 Drums  range  from  slow,  mid  paced  to  fast  drumming  with  a  great  amount  of  brutal  sounding  blast  beats  being  thrown  into  the  music  at  times,  while  the  bass  playing  has  a  very  strong  and  powerful  sound  with  heavy  riffing  that  dominates  throughout  the  recording.

Rhythm  guitars  range  from  slow,  mid  paced  to  fast  riffs  that  combine  black,  death  metal  and  grindcore  together  with  a  good  amount  of  melodic  riffing,  while  the  lead  guitars  are  very  melodic  sounding guitar  solos  and  leads  as  well  as.

Posted by OccultBlackMetal at 3:44 PM No comments:

1.Can you give us an update on what is going on with the band these days?


2. How would you describe the musical sound of the new album and how it differs from previous releases?


I think that the music in this  album is more direct and powerful than our previous compositions. The basic idea for the new music always was to write material more song oriented with more traditional structures introducing choruses and things like that, but keeping the violence and darkness that I think was always in our music. It was also important the introduction of a new guitarist with a more black metal background and the insertion of new drums techniques as the “gravity” I also believe that the sound achieved in the mixing and mastering process in Hertz Recording Studio gave to the music a more tighter and solid edge.


3.What are some of the lyrical   topics and subjects the new release explores?


The lyrics of Nepente was always inspired by human feelings as terror, pain, fear, wrath, revenge,  etc depicted in a symbolic way.  Other important topics in the lyrics include criticism of the attempts to domestícate the human nature by organized religions, and I was always inspired by the classical horror films and literature.


4. What is the meaning and inspiration behind the bands name?


Nepente was the name of the elixir that the greek gods drinks to forget, this was one of the great advantages that they had upon the human beings , the absence of remorse and guilt. I think that metal music  is a “Nepente” that can help us to eliminate the concept of sin that is so important for the religious people to dominate and control the actions and thoughts of the others.


5. What are some of the best shows that the band has played so far and how would you describe your stage performance?


We have played great shows with important colombian bands as Masacre, Inquisition and Witchtrap and with great foreign bands as Krisiun, Rotting Christ, Ancient, etc What we want to give to the crowd in our shows is an extreme experience of Brutality, Wickedness and Darkness.


6. Do you have any touring plans for the new release?


The idea is to play shows in the different regions of our country supporting the álbum and to carry out a South American tour the next year. Anyway, one of our main goals is touring overseas some day.


7. I have read that the band is looking for a label to release the new album on cd and vinyl format have you recieved any interest yet?


We are in negotiations with some record labels for a cd release or releases but we do’nt have proposals for a vinyl release yet. I am really looking forward to get a vinyl edition of this material!!!!!


8. On a worldwide level how has the feedback been to your music by fans of black and death metal?


The feedback for our music has been very decent considering that our first album was released by a very underground label as Metalbolic records still i must admit that they made a great effort to introduce the band in the underground metal market and we are very grateful for that. In any case the reviews of our material in the U.S.A. and Europe has always been very good.


9. What direction do you see your music heading into on future releases?


We are very pleased with the last material of our band  and i think that is the direction that we will follow in the future but we know  that we have to improve in several aspects concerning our songwritting and musical execution skills.


10. What are some bands or musical styles that have influenced your music and also what are you listening to nowadays?


We are influenced by  several metal styles although our main influences comes from Death and Black metal from the more classic material to some aspects of the new proposals in the extreme music. Anyway you can hear in our music some influences of traditional Heavy metal, Thrash, Doom, etc We do`nt put strict boundaries to our music. Personally in this moment i am a huge fan of some french black metal bands as Deathspel Omega, Merrimack, Antaeus, Arkhon Infaustus, etc I also enjoy the eclectic proposals of bands as Belphegor, Ishan, Akercocke…


11. Does Satanism or Occultism play any role in your music?


We are very agnostic persons and personally I use the imaginery of satanism and ocultism as a symbolic weapon against  obscurantist and brainwashing beliefs, i think that the greatest questions about our universe only can be  answered using the human rationality and the tools that science give to us.


12. Outside of music what are some of your interests?


13. Any final words or thoughts before we wrap up this interview?


I want to thank you for this interview and i want to invite metalheads to support the work of underground metal bands buying their music, attending to their shows and supporting all the zines, websites, etc  specialized in Metal music. STAY METAL AND TRUE!!!!! Check us out here http://nepente.bandcamp.com/

Posted by OccultBlackMetal at 11:48 PM No comments: 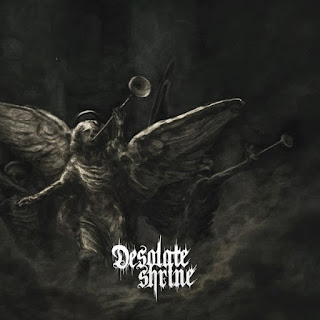 Posted by OccultBlackMetal at 5:35 PM No comments: 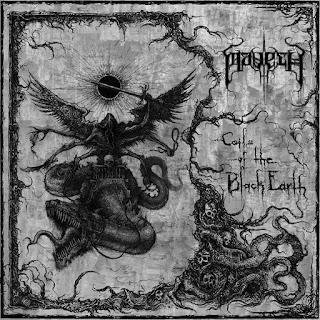 Posted by OccultBlackMetal at 1:40 PM No comments: 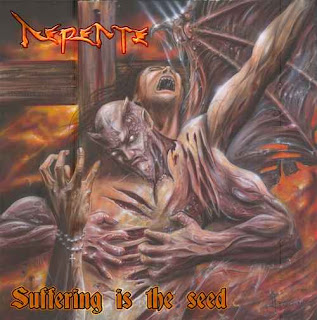 Rhythm  guitars  range  from  slow, mid  paced  to  fast  blackened  death  metal  riffs  that  are  very  dark,  heavy and  brutal  sounding,  and  there  are  little to  no guitar  solos  or  leads  present  on  this  recording.

Vocals range  from  deep death  metal  growls  to  high  pitched  black  metal  screams,  while  the  lyrics  cover  dark,  violent  and  blasphemous  themes,  as  for  the  production  it  has  a  very  strong,  powerful,  heavy,  brutal  and professional  sound to it.

Posted by OccultBlackMetal at 12:59 PM No comments: 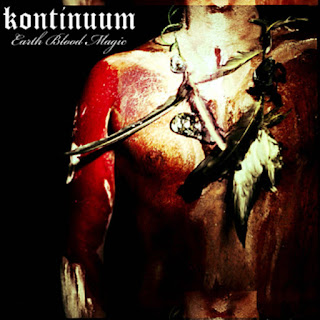 Rhythm  guitars  range  from  slow  to  mid  paced  riffs  that  combine  progressive  black  metal  with  atmospheric  doom  metal  and  ambient  with  a  good  amount  of  melody  being  thrown  into t he  riffing  as  well  as  a  good  amount  of  clean  playing,  while  the  lead  guitars  are  very  melodic  and  progressive  sounding  guitar  solos  and  leads.