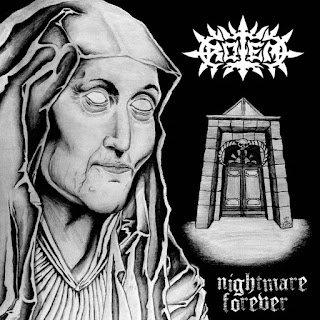 This  is  a  review  of  another  recording  from  Rotem  which  continues  the  technical  mixture  of  black  and  death  metal  from  the  previous  recording  with  the  ep  being  called  "nightmare  Forever"  and released  by  Egg  Of  Nihilism  Productions.

Rotem  goes  for  more  of  a  straightforward  and  technical  style  of  death  metal  on  this  recording  while  the  music  still  incorporates  a  great  amount  of  black  metal  style  vocals,  the  production  sound s very  professional  while  the  lyrics cover  horror,  psychological  and  nightmare themes.


Posted by OccultBlackMetal at 12:37 AM No comments: 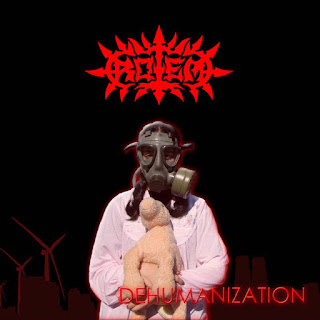 Rotem  plays  a  musical  style  that  mixes  black  and  death  metal  together  and  also  brings  in  a  great  amount  of  old  school  elements and  technical  parts  which  also  makes  the  songs  stand  out  a  bit  more,  the  production  sounds  very  professional  while  the  lyrics  cover  dark,  political  and  real  life  themes.


Posted by OccultBlackMetal at 11:57 PM No comments: 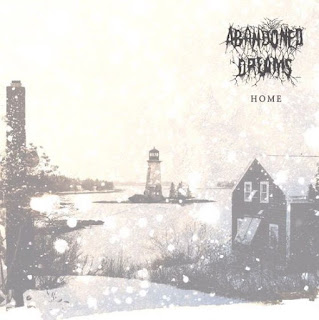 Abandoned  Dreams  plays  a  style  of  doom  metal  that  is  very  melodic  and atmospheric  and  also  mixes  in  a  great  amount  of  post  rock  and  black  metal  elements  to  create  a  sound  of t heir  own,  the  production  sounds  very  professional  for  being  a  self  released  recording  while  the  lyrics  cover  nature  and  despair  themes.

Posted by OccultBlackMetal at 10:31 PM No comments: 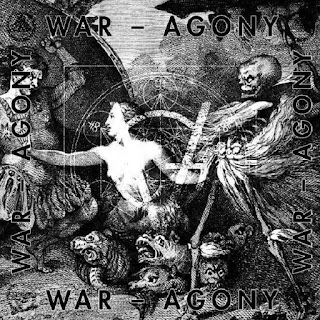 Reverb  noises  start  off  the  ep  along  with  some  aggressive  hardcore  style  growls  and  screams  and  the  music  also  brings  in  a  great  amount  of  blast  beats,  melodies  and  elements  of  crust  as  well  as  the  songs  utilizing  breakdown's during  mid  paced  sections  and  the  tracks  also  bring  in the  heaviness  and  darkness  and  black  and  death  metal.

https://grimvision.bandcamp.com/
Posted by OccultBlackMetal at 11:18 PM No comments: 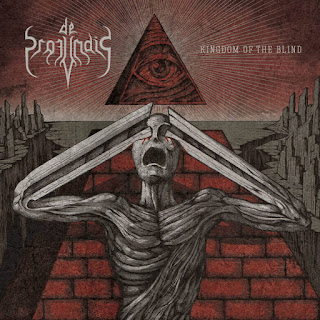 a  very  dark,  distorted  and  atmospheric  sound  starts  off  the album  along  with  some  melodic  guitar  leads  a  few  seconds  later  which  also  dominate  throughout  the  recording  and  after  the  intro  the  music  goes  more  more  of  a  progressive  and  extreme  metal  sound  that  uses  a  good  mixture  of  both  death  metal  growls  and  black  metal  screams.

De  Profundis  creates  another  album  that  is  very  progressive  and  technical sounding  as  well  as  sticking  to  their  black,death  and  doom  metal  roots,  the  production  sounds  very  professional  while  the  lyrics cover  negativity,  solitude,  despondency  and  contemplation  themes.


Posted by OccultBlackMetal at 12:41 AM No comments: 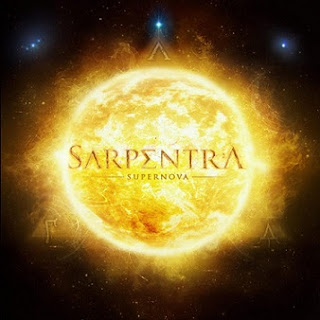 Sarpentra  plays  a  musical  style  that  is  mostly  rooted  in death  metal  but  also  mixes  in black  metal  and  elements  of  classical  and  middle  eastern  music  to  create  a  sound  of  their  own,  the  production  sounds  very  professional for being  a  self  released  recording  while  the  lyrics  cover occult  themes.


Posted by OccultBlackMetal at 12:46 AM No comments: 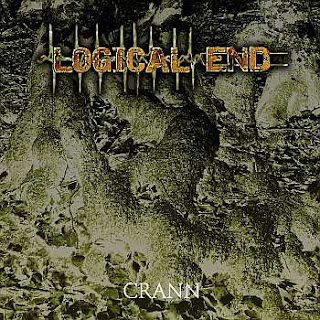 http://logicalend.bandcamp.com/releases
Posted by OccultBlackMetal at 7:36 PM No comments: 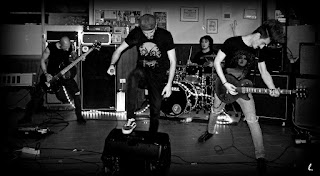 1.For those that have never heard of you before, can you tell us a little band about the band?
G. We are LAMBS, a band from Forlì-Cesena, Italy. It's not easy to fit in a specific genre, but we play some kind of crust/black/math/post metal, or whatever you hear in it.

2.You have an ep coming out in September, how would you describe the musical sound that is presented on the recording?
G. As I said before we don't really fit in any specific genre, on the EP you can hear hints of black metal, as well as punk, sludge and more atmospheric post metal sections. Each song tends to be a little different from the other, and the production just kind of holds them together.

3.What are some of the lyrical topics and subjects the band explores with the music?
G. Our first EP is mainly focused on introspection, with a misanthropic feel. The lyrics are by C. and they are all linked in one way or another. For newer material we're both writing, and my lyrics are mostly based on personal issues concerning the way I relate to other people.
C. I’m comfortable with existentialism. I am really inspired by human feelings, philosophy and psychology topics since a bunch of years.

4.What is the meaning and inspiration behind the name 'Lambs'?
G. The name is kinda ironic, since we are not christians or catholics, and the lamb is considered the perfect scapegoat and a sign of purity. If you realize how the church fooled us in the last couple of centuries the lines between sinners and preachers gets blurry. Who's the actual lamb?

5.What are some of the best shows that the band has played so far and also how would you describe your stage performance?
G. One of our best shows has definitely been in our hometown Cesena, in April. It was really intense. Another cool show it's the one we played 2 weeks ago in Treviso.
I'd say that our music translates better live than in the studio, we put up a pretty intense live show and try to be the more "in your face" that we can.

6.Do you have any touring or show plans once the ep is released?
G. Yes, we do. We're gonna keep playing a lot in Italy and we're also gonna tour europe in October with Abaton.
C. After the release we will mainly hit Germany, Switzerland and Italy.

7.Can you tell us a little bit more about 'Grind On The Road Promotion'?
G. GOTR is a creation of C. and his friend Enrico, who put up an incredible booking and promotion agency, as well as an interesting webzine. It's focused on interesting music in general (from grindcore to post rock) and the booking agency works out some pretty cool shows in our area.
C. I run Grindontheroad.com
8.On a worldwide level how has the feedback been to your music by fans of black metal and hardcore?
G. We've been receiving the first reviews as of now and I'm pretty proud of the outcome. People are digging the different textures we have and it's definitely cool.

9.Where do you see the band heading into musically during the future?
G. We are already writing new material, and the new stuff is definitely different from what you hear in the EP. It is not radically different, it's just the rational evolution of what is going on in our first release. It's more dissonant, more hardcore, more mathy, more sludgy and there are also more blast beats. In my opinion we only took our sound next level.

10.What are some of the bands or musical styles that have had an influence on your music and also what are you listening to nowadays?
G. Some bands and players more than others influenced my way of writing songs. American late 90s hardcore, a lot of grindcore and the whole swiss extreme/experimental scene. Lately I've been in a huge TheRedChord/Meshuggah kick.
C. I’m currently listening the late works of Implore, Komara and Leviathan (US). Oh, and I really can’t wait for the oncoming Cattle Decapitation’s album.

11.What are some of your non musical interests?
G. I play in 4 bands so I don't have much time to do anything else. But when I have free time I just love going out and drink with my buddies. I also enjoy reading but I don't really have the time to sit down and relax with a book lately.
C. I love art in every form, especially drawing or painting, I’m comfortable with forceful books and weird movies as well. Hanging out with my girlfriend or tasting good beers with a close friend are another pretty things.

12.Before we wrap up this interview, do you have any final words or thoughts?
G.  Thanks for your time, our first EP "Betrayed from birth" will be released Septembed 1st, 2015. There are only 200 handnumbered copies.
You can listen to the first song online here, https://goo.gl/4uB6nX
And preorder it over here: https://goo.gl/aHQHet
Posted by OccultBlackMetal at 1:10 AM No comments: 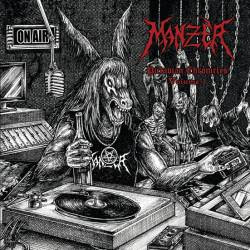 Reverb  sounds  start  of  the  compilation  along  with  some  heavy  guitars  a  few  seconds  alter  that  leads  toi  more  of  a  blackened  thrash  metal  direction  along  with  some  vocals  that  bring  in  aggressive  screams  while  also bring  melodic  at  times  and  the  music  also  brings  in  a heavy  dose  of  80's  first  wave  black  metal  influences.


Posted by OccultBlackMetal at 10:53 PM No comments: 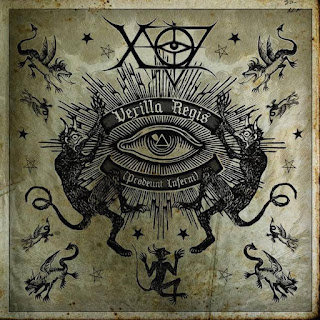 Posted by OccultBlackMetal at 12:24 PM Lambs  creates  a  musical  style  that  takes  black  metal,  crust  and  post  hardcore  and  mixes  them  together  to  create  a  very dark  and  original  sound,  the  production  sounds  very  dark  and  heavy  while  the  lyrics  cover  angry  and  real  life  themes.


Posted by OccultBlackMetal at 8:30 PM No comments: