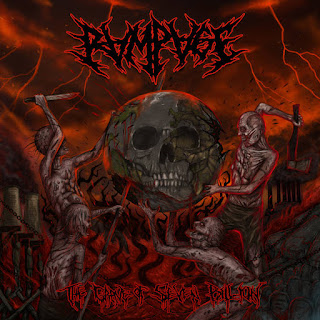 Acoustic  guitar  playing  starts  off  the  album  before  going  into  a  very  fast  musical  musical  direction  that  also  uses  a  great  amount  of  blast  beats  along  with  the  vocals  being  mostly  death  metal  growls  and  all  of  the  musical  instruments  on  the  recording  have  a  very  powerful  sound  to  them.

Ram-Page  creates  another  recording  that  remains  true  to  the  blackened  death/thrash  mixture  of  previous  releases,  the  production  sounds  very  professional  while  the  lyrics  cover  violent  themes.

Posted by OccultBlackMetal at 10:49 AM No comments: 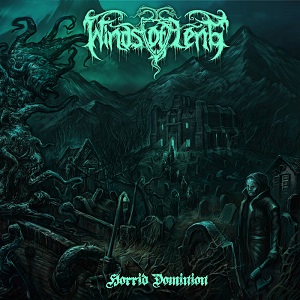 Winds  Of  Leng  plays  a  musical  style  that  mixes  black  and  death  metal  together  to  create  a  sound  of  their  own,  the  production  sounds  very  professional  for  being  a  self  released  recording  while  the  lyrics  cover  horror,  apocalypse  and  the  unexplained  themes.

Posted by OccultBlackMetal at 12:49 PM No comments: 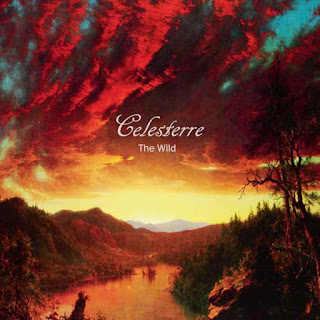 
Celesterre  plays  a  musical  style  that  is  mostly  rooted  in  traditional  doom  and  heavy  metal  while  also  mixing  in  some  progressive  and  black  metal  elements  to  create  something  very  original,  the  production  sounds  very  professional  while  the  lyrics  cover  Nature  themes.

Posted by OccultBlackMetal at 8:12 PM No comments: 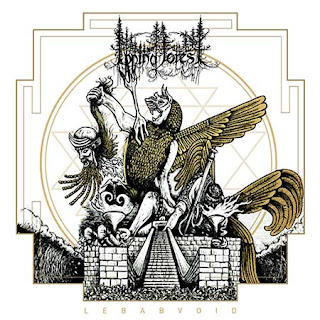 Epping  Forest  plays  a  style  of  blackened  death  metal  that  also  takes  the  genre  into  more  of  an  avant  garde  and  experimental  direction,  the  production  sounds  very  professional  while  the  lyrics  cover  Occultism  and  Mythology  themes from  Sumerian  and  Ancient  Civilizations  sources. 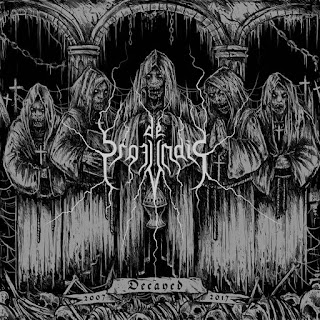 Throughout  the  compilation  De  Profundis  brings  out  a  very  progressive  style  of  blackened  death  metal,  the  production  sounds  very  professional  while  the  lyrics  cover  negativity,  solitude,  despondency  and  contemplation  themes.

Visit De Profundis on Facebook
Posted by OccultBlackMetal at 7:08 PM No comments: 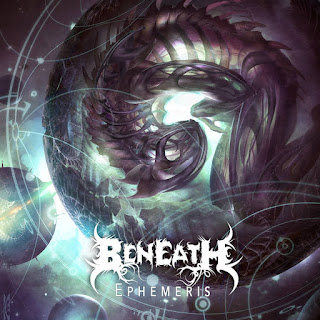 On  this  recording  Beneath  gives  a  blackened  touch  to  their  brutal  and  prog  style  of  technical  and  brutal  death  metal,  the production  sounds  very  professional  while the  lyrics  cover  science  fiction  and  futuristic  themes.

Posted by OccultBlackMetal at 8:00 PM No comments:

1.For those that have never heard of you before, can you tell us a little bit about the band?
Xahaal : Hello, first of all thanks for your support. Ominous Shrine is a French band I founded in
2016, After years of playing and composed for Malepeste I wanted to make something more
heavy, more death. I tried it with band called Temple of Worms, but I leaved this band in 2016 to
found Ominous Shrine with some friends. Seb from Dysylumn is our vocalist, he played rhythm
guitar too live. Tom is the drummer from Aeon Patronist a technical black/death band and Dimholt
is the ancient bass player of Osirion and Temple of Worms.
Ominous Shrine is an occult black/death metal band dedicated to the left hand path.

2.Recently you have released an album, how would you describe the musical sound that is
presented on the recording?
Xahaal : Well this is old school death metal with some occult, dissonant black metal parts, with
powerful and deep vocals.

3.The lyrics on the album are very much in the Luciferian, Left Hand Path, Occultism and Sinister
Path traditions, can you tell us a little bit more about your interest in the dark arts?
Xahaal : Yes, the lyrics describe more or less the path to deification like only Left Hand Path can
offer. I am passionate about all esoterism in general, I like to study all mythologies or current. But I
found myself in the sinister way. The Luciferian Gnosis is a glorification of personal knowledge and
spiritual strength, you are free, your mind stays yours, you are not a part of any God’s plan. YOU
are the only God you need in your life.

4.What is the meaning and inspiration behind the name 'Ominous Shrine'?
Xahaal : This name is to express a dark religion idea. Something between spirituality and devotion,
nothing is black OR white, this is always black AND white. A shrine is a place where you can feel
good, safe, but this one is ominous, as all sanctuary really are when you open your eyes to the
truth.

5.What are some of the best shows that the band has played so far and also how would you
describe your stage performance?
Xahaal : Well, for the moment Ominous Shrine just played one show, others are planned but for
the moment we just have on experience with this band. We all have a lot with other bands, but
this first one for OS was really good. Great feedbacks and energies on stage. I wanted to do
something more “classic”, simpler than the Malepeste’s shows. No candles or other decorum, just
some incense to help us to feel it on stage. But nothing more.

6.Do you have any touring or show plans for the new album?
Xahaal : Just a couple of shows in my town with bands like Pensée Nocturne, Anus Mundi, Azziard,
The Negation etc… But we are looking for more. The stage is very important for me.

7.The new album was released on 'Goathorned Productions', are you happy with the support they
have given you so far?
Xahaal : Goathorned Productions is a very good label, and Luis is now a friend. He is really involved
in his job and it’s a real honor for me to have his support for Ominous Shrine.

8.On a worldwide level how has the feedback been to your music by fans of black and death
metal?
Xahaal : Maybe it’s too short to answer correctly, but for the moment feedbacks seems to be
really good.

9.What is going on with some of the other bands or musical projects these days that some of the
band members are a part of?
Xahaal : Malepeste and Dysylumn are working on a split together and an album for each band.
Aeon Patronist is going to release a really good EP too. And of course some shows in Europe like
Forest Fest, Ragnard Rock or Little Devil festival.

10.Where do you see the band heading into musically during the future?
Xahaal : I will continue to compose music in this way, and I hope to play a maximum gigs in some
different places.

11.What are some of the bands or musical styles that have had an influence on your music and
also what are you listening to nowadays?
Xahaal : This is bands like Grave Miasma, Dead Congregation, Maveth, Sheol or other bands of the
occult black/death scene who makes my vision of what I am looking for in death metal. But I am
listening a lot of things from In Solitude to Dalek, via Urfaust, Hetroertzen, Inferno, Subrosa,
Sektarism, Chelsea Wolfe or Schammasch. But these are just a very little parts.

12.Before we wrap up this interview, do you have any final words or thoughts?
Xahaal : Nothing more than saying thanks to you for your support. And to all people who
continues to make this music real.

Posted by OccultBlackMetal at 6:42 PM No comments: 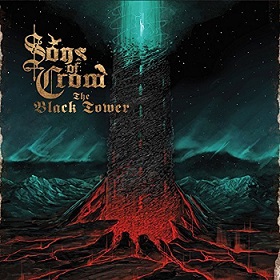 Spoken  word  parts  can  also  be  heard  in  certain  sections  of  the  recording  and  some  songs  also  bring  in  stringed  instruments  along  with  the  guitar  riffing  and  leads  also  adding  in  touches  of  traditional  metal  and  acoustic  guitars  can  also  be  heard  briefly  on  a  couple  of  tracks  while  the  slow  riffs  add  in  elements  of  doom  metal  along  with  all  of  the  tracks  sounding  very  different  from  each  other  an d they  also  close  the  album  with  an  instrumental  track. 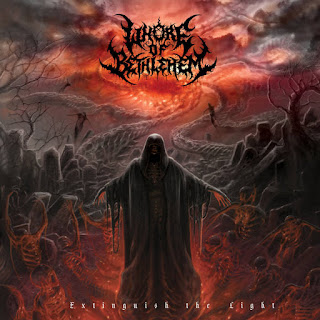 A  very  heavy  and  brutal  sound  starts  off  the  album  before  speeding  up  and  introducing  blast  beats  and  death  metal  growls  onto  the  recording  while  black  metal  screams  are  also  utilized  at  times  and  throughout  the  recording  you  can  hear  a  great  mixture  of slow,  mid  paced  and  fast  parts.

Posted by OccultBlackMetal at 6:04 PM

Black  metal  screams  can  also be  heard  in  certain  sections  of  the  recording  while  the  slower  riffing is  very  heavily  rooted  in  funeral  doom  metal  and  nature  orientated  soundscapes  can also  be  heard  briefly  along  with  some  avant  garde  elements  and  most  of  the  tracks are  very  long  and  epic  in  length.


Tchornobog  plays  a  musical  style  that mixes  black,  death  and  funeral  doom  metal  together  with  an  avant  garde  touch  to  create  a  sound  of  their own,  the  production  sounds  very  professional  while  the  lyrics  cover  Slavic  Mythology,  metaphors of  religion,  psychological  disorder  and  auditory  hallucinations  of  the  human  animal.

Posted by OccultBlackMetal at 5:41 PM 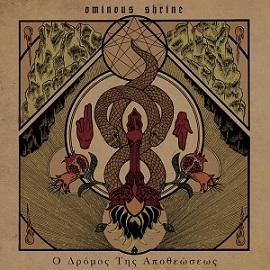 A  very  atmospheric  and ritualistic  intro starts  off  the  album  along  with  a  small  amount  of  tribal  style drumming  a  minute later  before  going  into  a  heavier  direction  which  also  utilizes  a  great  amount  of  dark  sounding  melodies  as w ell  as  introducing  deep  death  metal  growls  onto  the  recording.

Posted by OccultBlackMetal at 11:36 AM 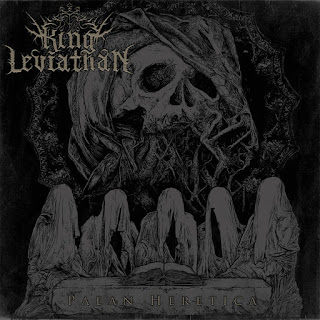 Dark  soundscapes  start  off  the  album  before  going  into  a  heavier  musical  direction  where you  can  also  hear  all  of  the  musical  instruments  that  are  present  on  the  recording  along  with  the  riffs  also  bringing  in  a  great  amount  of  dark  sounding  melodies  and  the  vocals  mix  in the  more  aggressive  screaming  thrash  style.

On  this  recording  King  Leviathan  remains  true  to  the  blackened  thrash  metal  style  of  previous  releases  while  also  mixing  in  more  elements  of  groove  metal  this  time  around,  the  production  sounds  very  professional  while  the  lyrics  cover  Occultism  themes.

https://www.youtube.com/watch?v=k_DigIT5K00
Posted by OccultBlackMetal at 10:42 AM 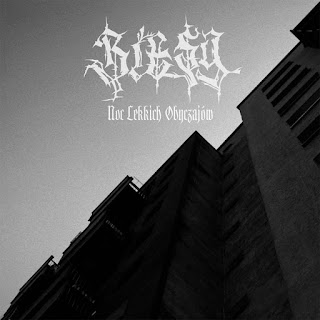 Distorted  guitar  riffing  starts  off  the  album  which  also  goes  into  a  heavier  direction  a  few  seconds  later  along  with  all  of  the  musical  instruments  sounding  very  powerful  and  after  awhile  death  metal  growls  are  added  onto  the  recording  and  the  songs  also  bring  in  a  great  amount  of  dissonant  structures.

Biesy  plays  a  style  of  blackened  death  metal  that  is  very  modern  and  dissonant,  the  production  sounds  very  professional  while  the  lyrics  are  written  in  Polish  and  cover  urban  decay  themes.

Posted by OccultBlackMetal at 11:45 AM