1. Can you tell us a little bit about the band for those that have never heard of you before?

Certainly. We are Oceans of Slumber from Houston, Texas and we play a very diverse style of progressive metal. We incorporate each and every style of music we see fit to create music that is engaging and interesting to us. From jazz to grind, we cover it all.

Open minded. We aren't elitist metal guys, so we don't have the boundaries a lot of bands do. We're all life long musicians that have always loved and played metal. This band was just a natural progression in our creative lives. Five like minded musicians that come from different playing backgrounds to play the music we always wanted to hear.

Lyrically we are about loss, pain, and all other personal battles a man (or woman) faces in their life. Personal subjects that we've all, in some capacity, dealt with. The tragedies of love, addiction, and the inabilities to communicate with each other in ways that would ultimately lead to a happier, less complicated, life.

For what we're doing, it just seemed fitting. How we came about the name was purely coincidental. We left rehearsals late one night and started brainstorming about names. First few naming attempts yielded everything from tech metal to Scriabin knockoffs. Hard to come up with anything wholly original these days you know? Haha. We were just throwing out some titles that were somewhat indicative of the music and landed on Oceans of Slumber. Worked out pretty well for us!

5. What are some of the best shows that the band has played so far and how would you describe your stage performance?

We've played with a wide range of bands. We played with Crowbar and Prong a few months ago and it was killer. Awesome turnout and two bands we all like quite a bit. Especially CROWBAR! Live we sound just like the record. We take playing very seriously and we shoot to not disappoint anyone who would take time out of their day to come see us. The band is very active and very metal in doing so though. Haha. Lot's of sore necks from headbanging!

6. Do you have any touring plans for the future?

Absolutely. A few of us have toured pretty extensively in the past and we certainly plan to take this band as far as we can. That would most definitely mean outside of the United States.

7. Currently you are unsigned, are you looking for a label and if so what kind of label do you feel that would be a perfect fit for the band>

Yes we are. We are looking for a label that will nurture us and allow us to progress and be the band we are capable of being. We have a very strong work ethic and we write a lot. So if you've got excellent distribution and you get your bands on tours, contact us immediately.

8. On a worldwide level how has the feedback been to your music by fans of extreme metal?

The reception so far has been spectacular. A few members of the band, myself included, come from a very extreme metal background and have certainly taken care to see that it is well represented in our music when it's needed. I'm sure we'll have our detractors, but we don't mind them either. Can't win them all.

9. Are there any other musical projects or is this a full time line up?

All of us in Oceans of Slumber also have a purely violent death/black band called Demoniacal Genuflection. Very fast and atmospheric, but kind of original in execution. Fun stuff for us and way to blow off some steam. One of our guitarist (Anthony Contreras), our bassist (Keegan Kelly) and myself are also part of the death metal band Ingurgitate, though we are on hiatus since our last tour.

10. What direction do you see your music heading into on future releases?

We will just continue to write music and proceed as planned. We already have half a record written and a full length for Demoniacal Genuflection too. We write a lot! The wonderful thing about music is that it's limitless in scope and it allows us to progress as musicians and people. This being a progressive band, I think we're all in the perfect situation at the moment.

11. What are some bands or musical styles that have influenced your music and also what are you listening to nowadays?

Hell. This could be a huge list. Summarized I'd say Frank Zappa, Disincarnate, Dissection, Pantera, Holdsworth, King Crimson, Tom Waits, 40 Watt Sun, Alice In Chains, Dehumanized, etc. The list of bands that have influenced us individually could fill up pages and pages. Personally I'm big into classical music. Mainly later Romantic era Russian Composers like Rachmaninnof and Alexander Scriabin, but certainly cannot leave out Chopin and Schubert! I also listen to lots and lots of metal too, so it's not neglected in any way. Recent releases would be the new Beheaded record "Never To Dawn", reissue of the Desolate demos "Sanity Obliterated", Primordial "Redemption at the Puritans Hand", Come See My Deadperson "self titled" and Twelve Foot Ninja "Silent Machine". Countless others that I'm constantly trying to stay up with. To much shit to keep up with these days.

12. Outside of music what are some of your interests?

I like cars and Powerlifting. Usually spend a lot of my time trying to stay or get into shape. An uphill battle most of the time! Gotta stay strong and verile in case my testicular fortitude is called into question at some point. Haha.

13. Any final words or thoughts before we wrap up this interview?

I'd like to thank you for the interview and am very pleased you listened to our record! Approach everything in life with an open mind, for we are complicated animals that certainly need stimulation beyond the norm to progress. Thanks again,
Dobber

Posted by OccultBlackMetal at 6:37 PM No comments: 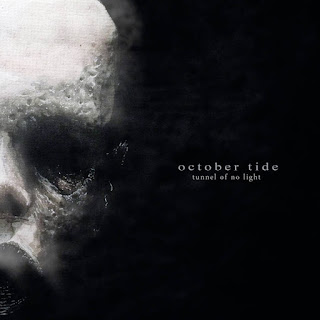 Rhythm  guitars  range  from   slow  to  mid  paced  riffs  that  combine  melodic  doom  metal  with  some  black  metal  influences  as  well  as  some  soft  and  clean  playing,  while  the  lead  guitars  are  very  melodic  sounding  doom  metal  guitar  solos  and  leads.

In  my  opinion  this  is  another  great  sounding  recording  from  October  Tide  and  if  you  are a  fan  of this  band,  you  should  enjoy  this  album.  RECOMMENDED  TRACKS  INCLUDE  "Our  Constellation"  "Watch The  Drowners"  and  "In  Hopeless Pursuit".  RECOMMENDED  BUY.

Posted by OccultBlackMetal at 11:20 PM No comments: 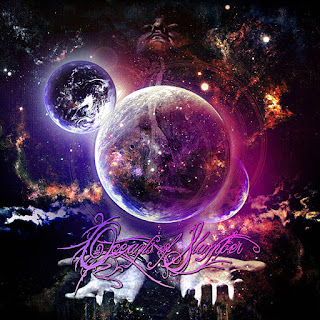 Drums  range  from  slow  to  mid  paced  playing  with  some  fast  drumming  and  blast  beats  being  utilized on  this  recording,  while  the  bass  playing  has  a  very  strong  and  powerful  sound  with  heavy  riffing  that  dominates  throughout  the  recording, a s  for  the  sound  effects  when  they  are  utilized  they  bring  psychedelic  elements  to  the  recording. 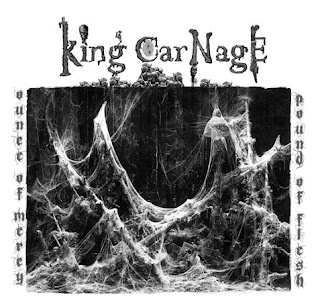 1. Can you give us an update on what is going on with the band these days? Were working hard on tightening the screws on this lineup and progressively evolving the compositions. Trying to bring in many new elements to our song writing while keeping true to our roots that are the formula to Lecherous Nocturne.

2. How would you describe the musical sound of the new album and how it differs from previous releases? It has a more moderate tempo throughout the album. We still love blazing blast beats but wanted to have a significant identity to this effort in our discography. It is focused more on the emotion of our hatred and disgust for many things without any extra frill.. Right to the point! Ive heard it said "if your not metal your not gonna like this album" and I beleive thats just what the intention was here. Weve always written and performed our songs the way we wanted to without caring what the "reviewers" would say about it but I feel this one is a knife right to the temple! A good "Fuck You" metal album that we feel this genre is in need of.

3. What are some of the lyrical topics and subjects the new release explores?
Ranging from many subjects that interest us, some historical, some scientific, some emotional.

4. What is the meaning and inspiration behind the bands name? Lust... Its a beautiful and drudging topic that facinates us and inspires us. Lecherous Nocturne is defined as a dark lust filled musical composition. Although many of our songs wander far from the meaning behind the name of the band the basic theme is always similar. Reality without any filters.

5. What are some of the best shows that the band has played so far and how would you describe your stage performance? I personally wasnt performing with the band for this one but I believe House of Blues in L.A. on the Cannibal Corpse tour sticks out as a memorable show for the band as all out ruthless and brutal. All shows get the same level of intensity from us whether it be 5 to 5,000 people. The only difference we see is the responses. Were on the stage for the simple and pure reason to play music for the sake of music. We have nothing to gain or lose besides the respect of our peers and metal bretheren.

6. Do you have any touring plans for the future? Not at the moment, we will be out in support of Behold Almighty Doctrine beginning shortly after the release this year but nothing set in stone enough to announce at the present.

7. On a worldwide level how has the feedback been to your newer material by fans of brutal death metal?
Like I said earlier, the fans of brutal music "get it" and all the poser limp wrist wine sippers that like pretty, polished grammy attempts seem to have something negative to say. All in all were very happy with the level of acceptance in the international spectrum.

9. What direction do you see your music heading into on future releases? Always trying to innovate and progress musically but were wanting to bring back some of the earlier elements and potions that we love. We want every release to have an identity of its own while maintaining the level of intensity we strive for.

10. What are some bands or musical styles that have influenced your newer music and also what are you listening to nowadays? We love cult bands like 1349, Angel Corpse and Abigail Williams. Our influences span way too far to list them all but you can pretty much sum that one up in one word... Cult...If its real and no frills then chances are we love it.

11.Outside of music what are some of your interests? Fucking nothing... Sex mabey..

12. Any final words or thoughts before we wrap up this interview? Thanks for taking the time to have a talk with us here today!! Best wishes!!! Cult as Fuck!!! www.lecherousnocturne.net

Posted by OccultBlackMetal at 11:37 PM No comments: 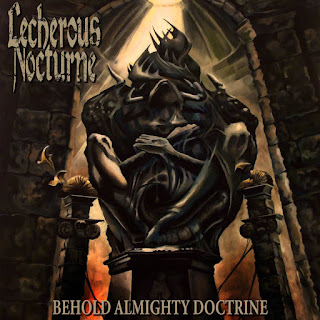 Rhythm  guitars  range  from  slow,  mid  paced  to  fast  death  metal  riffs  that  are  very  heavy,  technical  and  brutal  sounding  with  a  great  amount  of  grindcore  and  black  metal  influences  being  thrown  into  the  riffing  and  there  are  no  guitar  solos  or  leads  present  on  this  recording.