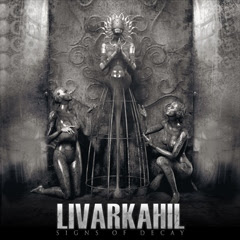 Livarkahil are a band from France that plays a very blackened form of death metal and this is a review of their 2011 album "Signs Of Decay" which was released by Listenable Records.

Drums range from slow, mid paced to fast drumming with a lot of brutal sounding blast beats being thrown in, while the bass playing has a very dark tone with riffs that follow the riffing that is coming out of the guitars.

Rhythm guitars range from slow, mid paced to fast blackened death metal riffing that is very technical at times and has somewhat a metalcore element in the riffing, while the lead guitars are very technical and melodic sounding death metal guitar solos and leads, as for the acoustic guitars when they are utilized briefly they use finger picking to bring a middle eastern feeling to the music.

Vocals are mostly deep death metal growls, with some clean singing and hardcore style shouts as well as some spoken word parts, while the lyrics cover occultism, anti Christianity and hateful topics, as for the production it has a very powerful, heavy and professional sound to it.

In my opinion Livarkahil are a very good blackened death metal band with a metalcore edge and if you are a fan of this style, you should check out this band. RECOMMENDED TRACKS INCLUDE "When Hell Is Near" "Art Of Bleeding" "Above All Hatred" and "Heaven Shall Fall". RECOMMENDED BUY.

Posted by OccultBlackMetal at 12:13 AM No comments: 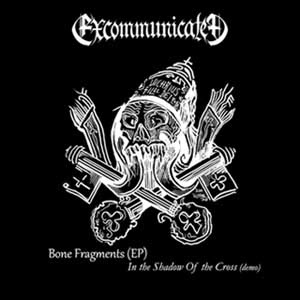 Excommunicated are a band from Louisiana that has had their previous album reviewed as well as being interviewed by this zine that plays a very blackened form of death metal and this is a review of their 2011 digital e.p "Bone Fragments" which consists of songs that where recorded during the album recording with some demos and rough mixes.

Drums range from slow, mid paced to fast drumming with a good amount of blast beats being thrown in as well as some drum programming being used on the remix that gives the musical an industrial feel, while the bass playing has a very dark tone with riffs that follow the riffing that is coming out of the guitars and at times times they have a very powerful sound to them, as for the keyboards which are rarely utilized they add another dimension of darkness to the music.

Rhythm guitars range from slow, mid paced to fast dark blackened death metal riffs, while the lead guitars are very distorted sounding black/death metal guitar leads and solos and at times they have a melodic sound to them.

Vocals are mostly deep death metal growls mixed in with some high pitched black metal screams with one song having some rough sounding clean singing on it as well as some spoken word samples, while the lyrics are very anti christian and catholic with a satanic edge to them, as for the production it has a very dark and raw sound to it.

Posted by OccultBlackMetal at 10:06 PM No comments:

1. Can you update us with what is going on with Salem these days?
Hi and thank you for having us over. Salem has just released our 7th album titled "Playing God and other short stories" on Pulverised Records. The album was released in Israel in April, in Europe in late May and is about to be out in the States.
We played a CD release show in Israel in April and we are planning to follow with some European shows in the next few months.
Last couple of months were busy promoting the release mostly in Europe and Israel.


2. Recently the new album came out on Pulverised Records, how has the support been so far from that label and how would you compare it to the other labels that you have been on?

The label is everything we ever wished for. I think this is the best promotion we've had since the early Morbid Records days.
Pulverised are very attentive, very professional and pretty well connected in the world of extreme music.
For the first time ever in my life, there is a drum contest held at sick Drummer Magazine where contestants need to play along the opening track of the new album. Check it out, drummers.

3.Your music has evolved over the years from being primitive black/death which helped influenced the 2nd wave of black metal, to the stuff that you doing now what makes you evolve with each album?

You know, we have been around for a quarter of a century. It is a long time and I think that our music is not the only thing that changed over this period. We have changed as people as well. Nothing stays the same. If our music did not reflect that, it would prove that we were not too credible.

4. Even your more black metal stuff was political, have you ever recieved any unwelcome critism due to having a lyrical approach that most bands in the genre never touch?

We used to receive some hate mail. Some people still bash us online. It is ok, we are not trying to please as many people as possible, trying to sell 2 million copies. I just think that it is weird that people would spend so much time and effort on something that they do not like and know that even if they sent us their hate mail, we would not disband. Instead of spending all this time with something that they think is good. I simply do not get this attitude.

5. Wht is going on nowadays with producing bands, and what are some bands that you are currently working with?

We stopped doing that. These days there is finally a metal scene in Israel, a pretty proud one. We can go about our business without worrying too much about other bands. Many bands go out of the country to produce their albums, many bands go on tours in Europe. It is finally happening, there is a metal culture in Israel.


6. You are seen as one of the pioneering bands in the Isreal metal scene what is your opinion on some of the bands that you have influenced?

It is a great honor to be considered a forefather. It is always a compliment to hear a band play a Salem cover or even mention Salem as an influence.
I think that there are some great metal bands in the country these days. Too bad that the industry is doing so badly. A lot of bands, locally and worldwide are not going to get the exposure they deserve, not because their music is not good but because of the state of the music business.


7. What are some of the best shows that the band has done so far and how would you describe your stage performance?

The show in April was amazing. The vibe was electrifying. We played a show with Obituary and that was one of our most intense ones ever. The show at the French Hellfest was an experience. The appearance we made at the Holocaust Remembrance service a couple of years ago with "Ha'ayara Boe'eret" was also an experience of a lifetime.
We are not playing too many shows a year so we are trying to pick up events that seem interesting to us and make each time we go on stage an event to remember.
I think that Salem's music is made for the stage. I think that the bands goes through very well on stage.

I wish. We all wish. Thanks to MySpace and Facebook our fastest growing market is the USA.
If an American management office will be hip to that, maybe we will get to play for the American market for the first time ever. It will be something special.


9. How has the response been to the new album by extreme metal fans worldwide?

Pretty supportive. Of course there are always those who were never into the band and all of a sudden connected due to the nature of the new material and old school fans who feel that we betrayed our roots but generally speaking, the album has been received very well.


10. Out off all the albums that the band has put out so far, which one are you the most satisfied with?

After working with Colin Richardson of "A Moment of Silence" in 1997 we thought that nothing would ever sound better than that.
I think that the new release sounds pretty damn good. It was recorded in one of the best studios in Israel and mastered at Sterling Sound NYC.
I am not even getting into the fact that as the years go by we simply get tighter as a band and better players on our individual instruments.
Our latest is definitely our greatest.


11. What are some bands or musical styles that have influenced your music and what are you listening to nowadays?

Wow, this list would prove to be endless. The new release has many flavors. Some are not even related to metal. There are some West African music influences, Military music influences, Religious music, Raggae (there is a Bob Marley cover on the new album of "Exodus" and the list goes on.
Even in metal, there are so many great bands out there these days, it is unbelievable.

12. Does anyone in the band have an interest in the Hebrew Cabballa?

I was raised in a religious environment so I know a thing or two about that. To be honest, I am not that interested in mysticism. There were some Kaballistic symbols on the booklet of our first live DVD, "Live Demise".
That is about it.


13. What are some of your interests outside of music?

Mythology, physics, video games, sports, art in general.
You have to remember that most of us in the band are married with children. We have some mileage so our interests are varied.

14. Any final words or thoughts?

Thank you so much for you interest and support, we hope to see you live pretty soon, America. Feel free to find us online and drop us a line... only if you like what you hear. If not, write someone else who's music moves you. Rock on.

Posted by OccultBlackMetal at 2:15 PM No comments: 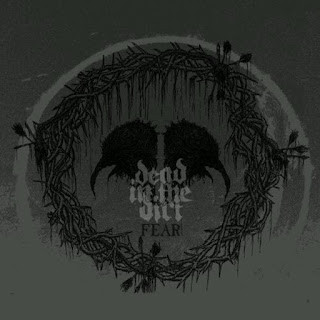 Dead In The Dirt are a band from Atlanta, Georgia that mixes crust and hardcore together with grindcore and black metal and this is a review of their 2011 7 inch "Fear" which was released by Southern Lord Records.

Drums range from slow, mid paced to fast drumming with a lot of brutal sounding blast beats being thrown in, while the bass playing has a very dark tone with riffs that follow the riffing that is coming out of the guitars.

Rhythm guitars range from slow, mid paced to fast riffing that combines influences from black metal, grindcore, hardcore and crust punk to create a sound that is very dark, brutal and original sounding and there are little to no lead guitars or solos present on the recording.

Vocals range from deep grind/hardcore growls to high pitched crustcore screams that have a black metal edge to them, while the lyrics touch on dark on hateful themes, as for the production it has a very dark and heavy sound to it.

In my opinion Dead In the Dirt are a very good blackened hardcore/crust band and if you are a fan of this stylee, you should check out this band. RECOMMENDED TRACKS INCLUDE "The Screaming Wind" "Disease" "Skin Graft" and "Fear". RECOMMENDED BUY.

http://www.facebook.com/deadinthedirt
Posted by OccultBlackMetal at 6:57 AM No comments: