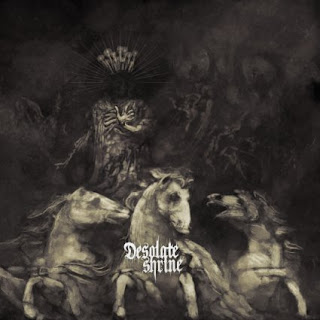 Desolate  Shrine  creates  another  dark  and  ritualistic  sounding  blackened  death  metal  album  with  this  recording  and  they  expand  on  the  sound  that  was  heard  on  their  previous  releases  while  also  taking  their  music  into  the  darker  direction,  the  production  sounds  very  professional  while  the  lyrics  cover  misanthropy,  nihilism,  satanism  and  occultism  themes.

www.facebook.com/desolateshrine
Posted by OccultBlackMetal at 7:12 PM