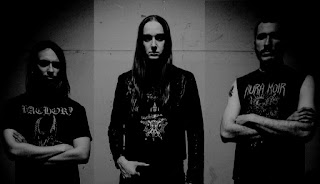 Since recording the album in May, we've been biding our time until release and playing a few shows over the summer. We did a few one-off gigs with some great bands like Ghoul and Nekrofilth, Black Tusk, and a few others. We also played a couple of cool fests, namely the inaugural "Thrilla in Ashevilla" fest in our hometown, which was a huge 4-day thing with tons of metal and punk bands, as well as Dirty South Death Fest IV in Birmingham, Alabama, which was a cool 2-day death/thrash/black metal fest set up by our friends in Ectovoid.

Other than that, we're actually gearing up for a short 4-date run later in September as well as some shows around the release date, and working on planning more beyond that.

2.In October you have a new album coming out, how would you describe the musical sound that is presented on the recording and also how does it differ from the stuff you have released in the past?

It's always a bit hard to describe your own sound. There are definitely elements of thrash and black metal, combined with a sort of raw, straightforward punk aggression. That being said, there are certainly other, more subtle elements at work that listeners will hopefully pick up on.

In terms of how the new record differs from the previous one, I would say that while The Devil's Work highlighted the punk elements and influences more clearly, The Red Sect makes the darker side of our sound more apparent. Likewise, the first record was very straightforward and openly violent, whereas The Red Sect is more seething and insidious.

3.What are some of the lyrical topics and subjects the band explores with the newer music?

The Red Sect can actually be considered a concept album. While there aren't really explicitly named characters and each song can stand on its own, a narrative exists throughout the album, should people care to follow it. I won't spoil the entire story, but essentially, members of a clandestine sect invite possession upon themselves and use this power to dismantle and annhiliate established order. Communion with the "Other," possession, vengeance and revolt are recurring themes.

The album draws heavy inspiration aesthetically, lyrically, and thematically from some of the darker aspects of Haitian Vodou—secret traditions within secret traditions. Many of the concepts are drawn from their myths, beliefs, and even real-life events. While this is in no way a portrayal of the activities or beliefs of the average Vodou practicioner, rest assured that it is also not merely some wild "Hollywood" voodoo story. Great care was taken in the meticulous research of the subject matter and the crafting of the songs.

4.What is the meaning and inspiration behind the name 'All Hell'?

The name comes from the Samhain song "All Hell," (which is a version of Misfits' "All Hell Breaks Loose") from their Unholy Passion EP. Danzig's bands have been the biggest inspiration for me personally, so choosing this name made perfect sense. It's a phrase with its own meaning as well, so it isn't obvious that the name is an homage. We also did not want a name that would pigeonhole the band into a particular genre of music.

This is a tough one, there have been so many! Highlights definitely include playing with our friends in Skeletonwitch last summer, and sharing the stage with 1349 in the middle of a snowstorm in South Carolina, of all places.

I would say our stage performance is very raw and energetic. We try to give everything we have to the crowd every time we play. The more energetic and crazy the crowd becomes, the more we can feed off of that energy and, in return, give them even more. This reciprocal giving and taking of energy is at the heart of all great shows.

When we play live, our goal is something much more than just performing for an audience. Of course, we want our set and our sound to be as tight as possible, but even more important than that is to unleash the raw forces that drive our music. The moments in which this happens—when the musicians and the crowd alike both momentarily escape the drudgery of daily life and whatever problems they may have, and become enraptured in the power of the music itself—this is the pinnacle of live performance.

Right now, we have a couple of short runs lined up for September and October, but we're also working on lining up some more touring for this Winter and next Spring. We've hit the southeastern US quite hard over the past year or so, but we will be expanding further soon. There are lots of places we would love to play. Bookers and contacts should not hesitate to get in touch. We want to bring hell to as many people as possible.

7.On a worldwide level how has the feedback been to your music by fans of underground metal?

The response thus far has been great, actually. I've been surprised by the positive reactions and feedback we have received from all over the world. This week, I've had contact from fans from Canada, Mexico, Brazil, Spain, France, Greece, Poland. . .and those are just the ones I can recall from the top of my head! Needless to say, it is very humbling to receive such positive feedback from the underground metal community. Powerful art can transcend all boundaries and borders, and we are very grateful to all of our fans, international and otherwise.

8.Where do you see the band heading into musically during the future?

Only time will tell. However, we have no intentions of making the same album twice. Within All Hell, there really are no rules as far as writing and direction go. Nothing is "too slow," or "too fast," or "not heavy enough." The more strict rules you enforce upon yourself, the more your material all begins to sound the same. Of course, we would like for people to be able to enjoy and connect with our music, but at the end of the day, opinions do not matter as long as we stay true to ourselves and our vision.

At the same time, we also won't force ourselves to make something different just for the sake of being different. That 'rule' would be just as debilitating as any other. There will certainly be common veins between this record and what comes after. One thing is for sure; any future material will sound like All Hell.

9.What are some of the bands or musical styles that have had an influence on your music and also what are you listening to nowadays?

A lot of diverse bands and styles have influenced us. One hundred percent of our punk influence comes from the Misfits. I was shown their music at a very young age and can't overstate their influence and importance. Strangely enough, I was never drawn to much other punk music. Misfits, early Metallica, and Black Sabbath were in heavy rotation in my younger years. As a teenager, I also got into Samhain and Danzig, as well as more and more extreme metal.

Our music is very much related to what some people have called "first wave" or even "proto black metal." That is to say the fast, evil, and aggressive sounding bands that were around before "black metal" as a genre was firmly established; bands like Hellhammer/Celtic Frost, Bathory, Venom, etc. (Some folks even lump Mercyful Fate into this category, simply because of their evil imagery and themes and the fact that they didn't fit neatly within an already established genre at the time.) This was a very interesting period in the history of metal; bands with backgrounds rooted in punk, thrash, and speed metal all began to reach further, to push the boundaries and head into darker and more extreme territory. There was a blurring of genre restrictions and labels, and new marvelous and hideous sounds were spawned. This is part of the reason why I think terms like "blackened punk" or "blackened thrash" are funny--where do you think black metal came from in the first place?

While people regularly compare us to those early bands, there was never a conscious decision to try to sound like any of them. The world has plenty of ripoff bands, and definitely doesn't need any more! Our sound is the result of throwing rules out the window and writing dark, aggressive,  straightforward music. We also incorporate elements from other influences that are more modern, and some that are not metal-related at all.

As far as what we are listening to, the three of us have our own metal standbys that can be found in regular rotation; stuff like Aura Noir, Darkthrone, Satyricon, Celtic Frost, and the list could go on and on. Our individual tastes are quite diverse, though. Personally, I've also been enjoying the following lately:

Tribulation – Formulas of Death  and The Children of the Night

Christian Death – Only Theatre of Pain

10.How would you describe your views on Occultism?

When discussion enters the realm of occultism, the realm of objective reality is left behind. There is no hard scientific proof of the existence of any supernatural forces or phenomena; if there were, such things would no longer be "supernatural," by definition. However, this doesn't necessarily allow one to write off occult beliefs and practices. Crowley, in Magic in Theory and Practice wrote that, "By doing certain things certain results will follow; students are most earnestly warned against attributing objective reality or philosophic validity to any of them."

For thousands of years, millions of people have died in the name of deities that do not objectively exist. Sometimes, the mere idea of something can be a much stronger force in the world than if that thing actually existed. There are symbols, ideas, and aesthetics within religions and what could be considered "occult" traditions that resonate deeply with people. At a certain point, in many cases, perception shapes and even becomes reality.

My academic background is actually in the historical and sociological study of religions, so this subject matter is infinitely fascinating to me, and I could go on forever. . .for brevity's sake, I'll move to the next question.

I am a fan of fitness and exercise and try to keep myself in decent physical shape. I try to travel often, whether it is for the band or my own purposes. I become very restless if I have been away from the road for too long.

I also spend a good amount of time reading and doing research on various topics that interest me. Nowadays, my reading is pretty evenly split between fiction and nonfiction. I think it's important to read lots of different types of material; contemporary fiction, literary classics, historical texts, biographies, poetry—anything that can help sharpen the mind and broaden one's horizons. I have quite the book collection.

Thanks for the interview, and thanks to all of the fans and friends who have supported us so far! The Red Sect will be available October 16th. Check it out, and hopefully we will see lots of you on the road soon.

And again: we do plan to hit the road more extensively in the coming months. Venues and bookers should not hesitate to get in touch.


[article written by Jacob Curwen of All Hell]
Posted by OccultBlackMetal at 4:42 PM