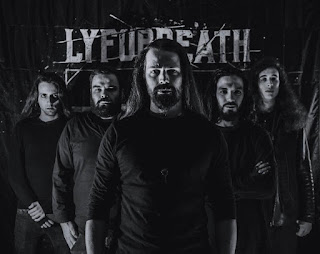 Divided between rehearsals, planning a little tour to get the album on the road and creating the concept and sound for the next album.

2.In December you had released your first full length album, musically how does it differ from your previous singles and demo?

We think that, with this album, we deliver a stronger message, a thicker ambiance and a more mature sound than the previous singles, due to the years of work we put into it.

3.The lyrics on the new album have a concept to them, can you tell us a little bit more about what you have covered lyrically with this recording and also how would you describe your progress as songwriters over the years?

In this album, we try to present both the extrinsic as the intrinsic universe, making people see their place in this reality and making them realize their true worth.

4.The album titled was named after the Royal Society Of London's motto, can you tell us a little bit more about your interest in their work?

The vision and the doctrine of the Royal Society brought to the world, don't take anyone's word for it, see for yourself. They try to instill in people a critical sense, to not only believe why but to do their own research to prove those facts.

5.What is the meaning and inspiration behind the name 'Lyfordeath'?

Lyfordeath was born to personify the equilibrium of life and death, as the triad of life, death, and resurrection on this endless cycle of eternity.

Inspired by Leonardo da Vince's  "Vitruvian Man", we create a man as a measure of its own chaos, making him hold a singularity on his hands, symbolizing the creation, and holding the event horizon as the symbol of destruction, having the earth as the stage of this reality.

Every gig we performed has, one way or another, its own special place in our hearts, each one of them was unique and magnificent in its own way. The only one we will refer to is the album release show, it was the culmination of several years of work in a fantastic night, in which everything flowed so naturally and shared a synergy so intense with the public that it becomes hard to describe such a feeling through words.

8.Do you have any touring or show plans for the future?

Some dates are already scheduled, but we have several to be confirmed.

9.On a worldwide level how has the reaction been to your newer music by fans of progressive and extreme metal?

In general, people seem to like our sound, they usually say that they delve on this trip and go to wherever it takes them.

10.Are any of the band members currently involved with any other bands or musical projects these days?

Two of them, we have the drummer working with "Invein" and "Nihility" also as a session drummer on the band "Sotz", and the bass player doing vocals on the band "Urban War".

We will not leave the path we delve ourselves into, but the future's uncertain, only time will tell.

12.What are some of the bands or musical styles that have had an influence on your newer music and also what are you listening to nowadays?

From Moonspell, Draconian, Slayer, Gojira, Opeth, Mgla to Chimaira, Septicflesh, Belphegor, NeObliviscaris and some others, each one of us has his personal influences and inspiration that, mixed together, crafted what Lyfordeath is all about.

Personally, I am into Photography/Videography, Poetry, Astrophysics and Astronomy.

Just want to leave here a big thank you to you guys for the interest in our project, and for all the people out there supporting the band, going to the gigs and buying the merch, a sincere thank you for you guys who make our work so fulfilling.

Posted by OccultBlackMetal at 9:07 PM