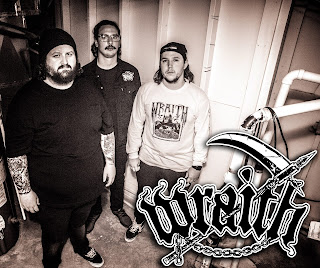 We have been gearing up for the release. When you put music out yourself you are responsible for the whole process so that has been keeping us plenty busy! In addition, we have a couple shows lined up in August. One is with a band called Solicitor and the other is with BAT.

2.You have a new album coming out in August, musically how does it differ from the stuff you have released in the past?

I think it is the next step in the evolution of Wraith. Just like the step between the S/T release and Heed.


3.You refer to your music as being 'NWI Blackened Thrash Metal, can you tell us a little bit more about this term?

Well, NWI refers to the area in which we are from (Northwest Indiana). The Blackened Thrash Metal part I think is pretty self-explanatory if you listen to the music! We all like the no frills, straight to the point, evil sounding thrash metal.

4.What are some of the lyrical topics and subjects you have explored with the new album?

On this record I talk a lot about religion, war, death, life, and the all the evil you can handle.

5.What is the meaning and inspiration behind the name 'Wraith'?

Wraith is another word for a reaper, ghost or evil spirit. I thought it had a nice ring to it so it stuck!

I feel like we always kind of take a chance with our artwork. For this record we all saw that cover and felt like it was a perfect representation of the music we were writing. It was inspired by an illustration used for a movie poster for the film Drag Me to Hell.

One show that comes to mind right away was at a place called the Blood Bowl in Minneapolis. It was an indoor skatepark that was ran by a group of local dudes. They were all super cool, and the show/party kicked ass. We also played a Halloween show last year that was absolutely nuts. Our sets are usually short, but they pack a massive punch. Because the songs are on the shorter side we tend to power through once we start.

No tour is planned at the moment, but that is definitely something we are looking forward to doing. We will be playing two shows at the Cobra Lounge in Chicago on the 6th and 16th of August.

9.On the album you also done a Misfits cover, what was the decision behind doing your own version of one of their songs?

We are all big Misfits fans, and it is always cool to have the opportunity to put your own spin on one of your favorite songs. We did the same thing with a Motorhead song for our first release.

10.The new album is going to be self-released, are you open to working with another label again in the future?

Yeah definitely! In this instance, we reached out to a few labels, but since we weren’t getting much in terms of a response, we decided that we would just do it ourselves so we could get it out there. We are hoping that the right person finds it!

11.On a worldwide level how has the reaction been to your music by fans of black and thrash metal?

People seem to really like it! I hope that we can continue to grow, and keep making the music we love. To us, the fans are the most important thing. All of us are fans of music in a huge way so we know what it’s like.

Hard to say right now since we haven’t started writing any music. We have been really focused on getting Absolute Power finished up. I think we have a couple ideas floating around though…

13.What are some of the bands or musical styles that have had an influence on your newer music and also what are you listening to nowadays?

Well, I think a lot of the classics influence us. We listen to a lot of 80’s metal and punk rock, but there are a lot of really good new bands too! Midnight, Toxic Holocaust, Power Trip, BAT just to name a few.

14.What are some of your nonmusical interests?

I think all of us are into a variety of things. Whether its video games, movies, sports, skateboarding, motorcycles, cars, spending time with friends/family we always find a way to occupy our time.

We just want to thank you and anyone else that takes the time to support us! We hope everyone enjoys Absolute Power, and we are stoked to get back to work on the next one.

www.facebook.com/wraiththrash
Posted by OccultBlackMetal at 12:14 PM