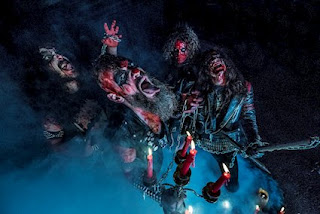 Hey man! Well, the album was recorded in March 2019. Ever since, we have put a lot of effort in playing live as much as we can. We felt that spreading our name and to be recognized as a serious force in both club and fest circuit was priority number 1, as a preparation for the new album coming out end of January 2020. We were able to play some shows across all over Europe… it was exhausting and absolutely thrilling at the same time. Sulphur & Steele 2019 we called it, and that’s how we felt and probably smelled haha.

Meanwhile of course there was artwork to be handled, video recordings scheduled, merch made etc etc. So all in all, we are continuously busy with those things.

2.You have a new album coming out during the end of January, musically how doesit differ from the stuff you have released in the past?

I wouldn’t say it differs so much, as that it has broadened the diversity of old metal styles in our music. So the speed parts are even more Motörhead and Exciter, and the thrash borderlines on Sadus tempos, the heavy metal is more epic and twin guitars more elaborate and frequent, and the black metal is just more evil and primitive whilst some parts actually have a bit of that Bathory viking-era grandeur – depending on the song and vibe we wish to evocate with that song. Actually, we put more than one of these genres in one song. It just flows and blends in, courtesy of our songwriter KK Ripper (guitars).

3.The band was also broken up for 7 years, what was the cause of the split and also the decision to reform?

Well, I am the only remaining original member. Bütcher as we are now carry the same name and spirit as before, but we are talking about two different bands. Starting out just as a local project amongst friends, without too much thought in it, it just died back then. We had other bands we were playing in etc. The reformation in 2014 was with KK Ripper, who was new. It all went very natural and was supposed to be just some homage to the metal of old again… but myself and Ripper didn’t foresee Bütcher would be gaining more and more attention. We started putting more into it, and the first album was suddenly a local cult hit. Then we were like: ok, let’s take it to the next level. And before you know it you play all over Europe and have new album coming out on Osmose Productions.

We do nothing new lyric wise. I am responsible for all the foul mouthed things I sing about, and as much as we have diverse old styles into our musical torrent, I let the feel of a song inspire me. So the new album title track is like the most epic thing I ever wrote. It’s basically about an intergalactic warrior, who has no gods or masters, and is just this kind of personification of an evil entity that destroys planets and universes alike. On the other hand it can be metal as fuck: in Iron Bitch we have a metal queen that, you know, slays men just because she can but let’s a few survive to pleasure her at night. There are Jack the Ripper references in Metallström/Face the Bütcher, ear splitting metal lyrics in 45 RPM Metal, etc…

As I said, I let the feel of a song inspire me. All riffing and arrangement is done by Mr. Ripper. He has just keeps exploring all his musical influences and has certainly evolved, in my humble opinion, in a rather short time span. No fear of blending whatever he sees fit, but also making a very coherent song. That is a certain unmatched strength of his, which he really has grown into.

5.What is the meaning and inspiration behind the name 'Butcher'?

Pretty simple: we wanted an easy, one-word, total 80’s metal name. Like Slayer, Darkness, Possessed, Razor… Of course, all of those are taken. But we were listening to Mad Butcher (old Destruction is one of my absolute fave thrash acts!) and were like: we are gonna name this thing of ours Butcher. And let’s put the Metal Umlaut in there, as an extra symbol of devotion and primitive strength. So we were known as BÜTCHER ever since.

We really wanted Kris Verwimp to do the artwork. On an Osmose release, that would be the icing on the cake for us. His work on our label for Marduk, Absu, Immortal,.. I always had a soft spot for that. It complemented those releases in a big way, and I dare say he did the same for us. The artwork is truly epic and is his perception of the lyrics of the 666 Goats Carry My Chariot track. The warrior on his chariot, steering the goats, the torch on it, all in a blazing maelstrom… It really is the defining artwork of the album title.

Our stage performance is rabid, wild and engulfing. We want to capture the audience and making them feel what we feel when we present our music. The speed, the grandeur, the over-the-top-in-your-face metal mayhem. So we move a lot, we have burning speed metal wheels on stage, candles, smoke, we wear leather, spikes, dark make-up & blood,… That has culminated in quite some engaging shows lately. Pitfest was just insane (we had to cut the show twice because of falling amps and a audience that was getting mega wild!). Muskelrock was fantastic to play in that cage in the small tent – what a setup! Headbanger Open Air was just crazy for a midday performance! Obscene Extreme and Antwerp Metal Fest had a fantastic summer festival vibe. Pfff, there are so many to mention. Later last year the reception at Eindhoven Metal Meeting was so good, but we also played in Basel and Oberhausen for a small audience and everyone was so into it… that vibe is so cool as well. It doensn’t matter where we play when we give that energy and we get it back like almost every show this year.

Our calendar is again filling up pretty nicely for 2020 – but if we get to play every damn weekend… we’d be into it! Our booking manager is looking at touring options as well… Amongst all these dates we can confirm to appear this year on Party San Open Air, In Flammen Open Air, … Well, actually, it would cool if the reader would join our Facebook and Instagram page – that way they can follow if we can play anywhere near! And, we have a release event coming up on January 31st in Antwerp with the mighty Schizophrenia, Aggressive Perfector and Hexecutor. That promises to be a wicked night!

9.The new album is going to be released on 'Osmose Productions', how would you compare working with them to your older label 'Babylon Doom Cult Records'?

It’s very different, of course. Babylon Doom Cult is an Antwerp based, independent label with a very eclectic roster. The label boss Jo has always believed in us though and gave us a platform to release the first album. It’s so cool what he has done, with his resources, trading wise and helping to get our name out there… We will always be humbled and thankful for that. With Osmose we will have a worldwide distribution and have secured a label bleeding with metal history. They are more professional and have way more options for promotion, pressing, putting us on digital platforms… to spread our name globally. Let’s see where it takes us!

10.On a worldwide level how has the reaction been to your music by fans of black, thrash and speed metal?

I’d like to think more reactions will be incoming once the new video and album hits… But so far we’ve been pleasantly surprised by messages from fans all over the world. Outside of Europe we get fan messages from Mexico, Chile, Brazil, USA, Canada, Malaysia, Australia… It’s baffling to read people are appreciating this so much. I suppose they really enjoy the pure Metallik atmosphere we put into our first album. Hopefully they (and more!) feel the same way about our latest one.

We have a very wild ambition for at least one side of the next album… but it would be a shame to spoil anything about that. Though of course Bütcher will remain Bütcher, no matter what. And, now we will be promoting the new album first, so let’s focus and concentrate on that, haha.

I guess our influences are pretty self-explanatory. Old Slayer, Hellhammer, Venom, Exciter, Bathory, Agent Steel, Nifelheim, Deströyer 666, Mercyful Fate, Iron Maiden, Judas Priest, Possessed, Dark Angel … you will find all these elements in our songs. All these bands also regularly visit my turntable and remain the things too which I listen a lot. That being said, I am a bit of a sucker of quite a few new bands… namely Traveler, Riot City, Vultures Vengeance, Vulture, Indian Nightmare, Blackrat,… I am enjoying a great deal of newer bands that keep the Flame of Old burning!

14.How would you describe your views on Occultism?

I enjoy occultism for the feelings they bring out in me. I have never dabbled deeper into the Occult than just randomly reading up on things that are brought to my attention via other bands or movies or the likes. It’s such a diverse subject as well, come to think of it. I just appreciate it on a very personal level, but is nowhere near as important to me as music itself.

Let’s end this one like in the good fanzines from the 80’s and 90’s… WE ARE FOREVER IN SERVICE TO THE ANCIENT GODZ OF STEELE ! 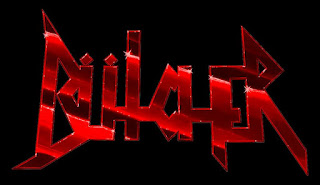