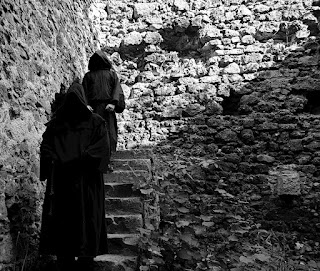 Hyperborean: We are Chthonic Cult and we play Death Metal with elements of Black and Doom. The band was formed in 2014, and our first full-length album I Am the Scourge of Eternity was released at the turn of 2015 and 2016 by Iron Bonehead/Necroshrine. The first lineup was Hyperborean on guitars and vocals, P. on drums, and Skandaz on bass. This lineup never recorded anything more. The current lineup (Hyperborean + Oblivion on bass) recorded a new album in 2021 with the help of a session drummer. This stuff has just now been released on CD by Putrid Cult under the title Become Seekers for Death. Tape edition is also coming soon. We are now looking for a regular drummer to start playing live shows (we’ve only played one so far, in 2016). I’m also recording demos for the third album now.

H: I am the Scourge of Eternity was in some ways simpler and in some ways more complex than Become Seekers for Death. The first album is over 40 minutes long, but only has 4 songs. These are based on simple riffs in the vein of Hellhammer and very early Sodom, arranged in atmospheric and hypnotic way. The second album, however, has 8 songs clocking in at about 40 minutes: the songs are simpler, but the riffs are way more complex (without being too technical) and there is a lot of leads. Some of these tracks have been compared to Immolation, which shows how much of a difference there actually is.

All in all, Become Seekers for Death is in my opinion the better work, as it’s more varied, dynamic, and powerful. Nevertheless, some people have told me that they like the first album more: I guess it’s the guys who are more into the more “primitive” forms of Metal, as well as BM rather than DM. So as always, to each his own, but I still think the second one is superior, and this is the direction I’m taking the music right now: doing more with more.

3.This is also your first release in 7 years, can you tell us a little bit more about what has been going on during that time frame?

H: Well, there was no actual 7-year break, we were active most of this time in one way or another, in one lineup or another. Right after I Am… we recorded a second album: I wanted it to be a bit of a change in direction, leaning more towards BM relying on dissonant chords. This, however, turned out to be too much of a departure, and was ultimately released as Deathlike Dawn Deliria and Dreams (Putrid Cult, 2020): check it out, if nihilistic BM is what you’re into.

Then we made demos for another full-length, but I stopped the process 90% of the way through because I didn’t like the result: it sounded like the first album, but worse.

Then there was the pandemic, lineup changes, etc., and I got busy recording Become Seekers for Death around 2019, and here we are now.

4.What are some of the other lyrical topics and subjects the band has explored over the years with your music?

H: I Am the Scourge of Eternity is kind of a concept album: it does not have a narrative like typical concept albums do, but there is “concept”, an idea that binds all the lyrics on the album together. The idea is the exploration of the meaninglessness of the existence of the world and life from the perspective of Vedic and gnostic mythologies. I think the similarities are astounding, considering the history and the geography, so I decided to explore these.

On Become Seekers for Death there isn’t such a single idea behind the lyrics. The subjects range from, again, Gnosticism (the title of the album is a quotation from a gnostic apocrypha), through the perception of death and violence in Greek mythology, to pure darkness and nihilism. My interpretation of the title of the album is that you should look for more than your material life in this world: this life is in my opinion in its essence meaningless.

5.What is the meaning and inspiration behind the name 'Chthonic Cult'?

H: For many years before starting Chthonic Cult, I was involved in practicing Indo-European polytheism (some will call it “paganism”). At some point I realized that I only find some aspects of the mythology meaningful, and others are simply too mundane and life-worshipping. These aspects that I found significant were those related to the underworld and the beyond, these aspects are also explored now in my lyrics. “Chthonic” is Greek for “of the underworld/related to the underworld”, so it was only natural for me to pick this name.

H: This is a variation on a symbol we’ve been using for a few years now: it’s this triangle form thing you can see on our Facebook page, CD layout, etc. It signifies uncreation, unbeing, and the ultimate liberation from the world and from time. This is closely connected with the topics we explore in our lyrics. Although while the symbol itself looks rather “clear”, the version you can see on the cover of Become… is rawer, even barbaric I would say, as if the symbol itself was extremely ancient.

7.Currently there are only 2 members in the band, are you open to expanding the line up again or do you prefer to remain a duo?

H: I’m definitely looking to expand: we’re looking for a regular drummer now so that we can play live. A second guitar player might not be a bad idea either further down the line, as there is and there will be even more double guitar work, not just two guitars playing the same thing.

8.Has the done done any live shows or open to the idea?

H: We’ve done just one, in 2016. It went very well, actually. I have a lot of stage experience from other bands, so does Oblivion, so we are planning to play live as soon as it’s doable.

9.The new album was released on 'Putrid Cult' how would you compare working with this label to 'Necroshine Records'?

H: Putrid Cult is doing an incredible job promoting the new album: there’s more reviews this time, more interviews, many more people are getting in touch with us, so I can say the cooperation with the current label has been seamless. I think it also makes sense to release your stuff in the same country where you live/come from: people seem to mostly follow their own scene in the underground, despite the seemingly overwhelming globalization.

10.On a worldwide level how has the reaction been to your music by fans of black and death metal?

H: I am the Scourge… had good reviews but there wasn’t much actual interest in it from listeners, Become… has mixed reviews but the overall response is much better. This reaction is much more positive than I had anticipated after 7 years of zero presence anywhere, when now even in the underground you have to “compete” with bands that seem to be on social media 24/7 and do gigs every single weekend.

H: I’m now working on our next album already and that way it’s looking is that it’s going to be faster, heavier, more atonal, and slightly more technical. I play guitar much more now (it’s not that I’ve suddenly learned how to do it now, though), so I don’t really feel like playing these simple riffs like we did originally, that is just boring. We’re also working on shorter, more aggressive versions of some songs from the first album, so that we can do them live without boring people to death.

H: I think that when you listen to Become…, my influences become quite obvious: it’s ‘80s European Thrash and Doom Metal, ‘90s Death Metal, and contemporary Black Metal. On the first album it was mostly Hellhammer, as I’ve already mentioned. Since I’m now working on a new album I don’t listen to metal at all, and when it’s not metal for me, it’s usually classical, some subgenres of jazz, the darker albums of post-punk, some hardcore punk, some prog.

Posted by OccultBlackMetal at 8:42 PM