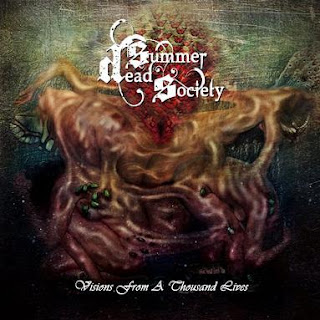 Dead Summer Society are a 1 man band from Italy with some help from outside musicians that plays a very atmospheric form of gothic/black/doom metal with some and death metal influences and this is a review of their self released 2012 album "Visions From A Thousand Lives".

Drums range from slow to mid paced drumming with not much in the way of fast playing or blast beats, while the keyboards bring a very dark, atmospheric, gothic, depressive sound to the music mixed in with some violins that give the music a very ancient feeling, as for the bass playing it has a very dark tone with riffs that follow the riffing that is coming out of the guitars.

Rhythm guitars are all slow to mid paced riffs that combine gothic doom metal with death metal as well as some black metal influences mixed in with a good amount of dark sounding melodies as well as some clean playing that brings a dark ambient atmosphere feeling to the music with a good amount of full chords, while the lead guitars are very melodic sounding doom/death metal guitar solos and leads.

Vocals are a mixture of deep doom/death metal growls, high pitched black metal screams, male and female spoken word parts as well as clean singing that combines both genders and whispers, while the lyrics cover dark, poetic and depressive subjects, as for the production it has a very strong, powerful, heavy and professional sound to it.

In my opinion Dead Summer Society is a very great sounding atmospheric band that combines gothic/doom/black and if you are a fan of this style, you should check out this recording. RECOMMENDED TRACKS INCLUDE "I Met You In Heaven And Hell" "Down On You" "Her White Body From The Coldest Winter" and "Army Of Winter(March Of A Thousand Voices)". RECOMMENDED BUY.

http://soundcloud.com/deadsummersociety
Posted by OccultBlackMetal at 6:43 PM