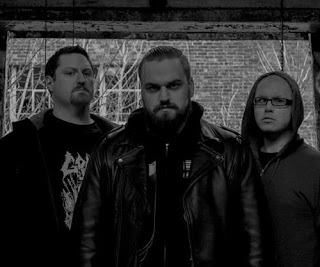 1. Can you give us an update on what is going on with the band these days?
Right now we have a few shows coming up over the mid west that we are getting ready for. We are also working hard on our debut full length album. We have plans to record in November 2013 and hope to have it our in early 2014!

2.How would you describe the musical sound of the new album and how it differs from past recordings?

In the past it was just me and a drum machine so the EP is way different than the past releasese! Sound wise I wanted to show more mid 90's death metal influence and capture some of that sound. When I think of death metal I think of what was happening around 1990 - 1993. The production of music back then to me sounded better - sounded real. I wanted the EP to have that human sound and not an over quantized sound.

3.Between 2001 and 13, there has only been 3 releases, can you tell us on the cause of that that?
Main reason - this was something to do when the other bands I was playing were taking a break from writing. It took me a long time to finish songs because I was writing and recording all the parts. When the first EP came out I did get some show offers but I could not find anyone that would really fit the bands style. It was very frustrating to see some real good opportunities get turned down so after that I kind of put it on shelf for a few years.

4. What are some of the lyrical topics and subjects the band explores with the new ep?
Lyrically we are not political or trying to blow minds with poetry. Songs are mainly about questioning religion. We like to come up with ideas that would make a good movie plot, then write lyrics around that.

5. What is the meaning and inspiration behind the bands name?

I wanted to have a name that would be easy to remember and short. The original name for this was Serpent but that was taken a million times over. I wrote a song for the first tape release that didn't get finished and in the lyrics I used "emblazoned a crossed the sky". I was going to have that as the name but was to long so I shortened to just Emblazoned.

6.What are some of the best shows that the band has played so far an d how would you describe your stage performance?
So far we have not had a lot of live shows. Personally so far my favorite show was a few months ago we opened for Jungle Rot in Kenosha. Was fun to hang out with some old friends I have not seen in a while. Stage wise no big frills or gimmicks we like to just go up there and throw it down old school style.

7.Do you have any touring or show plans lined up for the future?

Yes we have a bunch of mid west shows coming up over the rest of the year. Once we have the full length album done and released we plan to support that as much as possible. Hope to get at least 1 US and EU tour to support it.

8.On a worldwide level how has the feedback been to your music by fans of black and death metal?
So far been very positive - no real negative feed back. We have more feedback in the US than any place else. Other than via the internet we have not been able to reach a real massive amount of media in the EU. The cost to send out promo packs is very high and a lot of the media in the EU like to have physical copies for reviews.

9.What is going on with the other musical projects these days?

All of us also play in other bands. Jeff also fronts a band called Sovereign Descent, Alex and I are also in a band called Grievanze, A.J. plays in a lot of bands most notable is Decrepit Birth.

10.What direction do you see your music heading into on future releases?

The new songs we have done for the next album are turning out to be a lot more heavy. We also turned up the speed a bit. I would describe it as a down tuned Panzer Division Marduk meets Dismember Massive Killing Capacity...well those are some large shoes to fill so how about its faster and heavier!

11.What are some bands or musical styles that have influenced your music and also what are you listening to nowadays?

All the classic death and black metal bands for sure. To me don't really divide them up its all metal to me but people will understand what you are talking about when using death metal or black metal monikers. Now days not a lot has come across my path that seems interesting. Aeon's new album is great the last Behemoth and Goatwhore albums were great.

12.How would you describe your views on Satanism and Occultism?
Nothing makes better song titles or subject matter other than the Devil. Satan to me is the ultimate rebellion - nothing can be more rebellious in life that choosing Satan. Its a giant middle finger in the face to 99% of the world for those virtues I understand it but for the ideals behind it not so much.

13.Outside of music what are some of your interests?

I put in a lot of hours each week for my day job so I don't have much time to do anything else but work and music - and I'm perfectly OK with that! The only negative is I don't get out to see as many shows as I would like.

14.Any final words or thoughts before we wrap up this interview?
Thanks for the interview and support! If anyone would like to contact us please go over towww.emblazoned666.com or drop us an e-mail at info@emblazoned666.com.

Posted by OccultBlackMetal at 8:03 PM