We are a Blackened Speed / Thrash Metal band from Mexico City very influenced mainly by bands like Gehennah, early Onslaught, Celtic Frost / Hellhammer, Bathory, Motörhead, Abigail and Venom.
We are not trying in any way to innovate Heavy Metal or Rock n’ Roll as a whole, we are Heavy Metal fans playing their favorite music the way our favorite bands did before us.

2. So far you have released a demo, how would you describe the musical sound that is presented on the recording?

We were looking for a raw & crude sound for the Drink till You Fucking Puke Your Liver Out demo, we didn’t wanted it to sound like something too overproduced. I really think we captured the feel and the atmosphere we wanted to.
Musically, we tried to go back to the First Wave of Black Metal with speed-ish riffs and a very raw sound. To be honest, we are very happy with the result. Being fans of this kind of music, if some other band would had released it, it is something we would listen to.

Mainly alcohol & sluts. In general, these topics were local jokes by the members, we just “made them songs”.

4. What is the meaning and inspiration behind the name 'Ahvawe'?

Ahvawe in Spanish means something like a very sarcastic way to say “Ah, alright man”. Why such a stupid name for a band? Because it started out as a joke. The lyrical themes were (at first) local jokes by some of the members, stuff happening to us at parties, etc. When we decided we had to make a band and write about stupid shit happening to us, the less we cared was for the name of the band and to this day, it’s still the same.

5. What are some of the best shows that the band has played so far and also how would you describe your stage performance?

When we released the Precious Selfdestruction song, we got contacted by a guy in Oaxaca, Mexico and he wanted us to play there. It was the 28th of June 2014 and at the show we played with Survival (which we think is the best metal band in Mexico right now), Cöuntess, Dishelldethterrör (On their last show) and some other bands. I think that has been the best show for us because it was full of friends and very cool people, and the vibe of the whole show was very real, only real Heavy Metal maniacs were there, it was great though we had only rehearsed 4 songs for our show.


When we play live we try not to be the “I only come to play” band, we like to say stupid shit between songs as much as we can without boring the public, I think this have worked out for us pretty good until now.

6. Do you have any touring or show plans for the future?

Not really touring right now. At the moment we just play at some random shows in Mexico.
We are planning a mini-tour called “The Petit-Tour” on USA next year, mainly on California. We really hope we are able to do it.

7. Recently you have re-issued your demo on a split with Mexico's Countess, what are your thoughts on the other band that had participated on the split?

We knew very little the guys from Cöuntess before we played with them at Oaxaca, but we saw them live on December from last year (Which I think it was their first show) and we really liked their Midnight-like style.
A few days after we were announced to play in Oaxaca, the bass player of Survival contacted us and told us that he wanted to re-release our demo on tape with his label “Mosh or Die Prods.”, but told us that he was going to release it as a split with Cöuntess because of the length. We are really proud to share a split with them as they are really great guys and we are fans of them.

8. Currently you are unsigned, are you looking for a label or have received any interest?
We haven’t received much interest from labels but honestly we are not really looking right now for one, our main focus right now is to keep playing shows and have fun at them. Things will come at their own moment.

9. On a worldwide level how has the feedback been to your music by fans of black, speed and thrash metal?
We have had very good acceptance until now, more than we expected. We hurried to record our demo this year because we wanted to give away some copies at Maryland Deathfest, which we did. After MDF we got contacted on our band facebook by a lot of people we met there, we had much more “likes” on FB and to the moment, we haven’t heard any bad opinions on the demo, that’s pretty great. 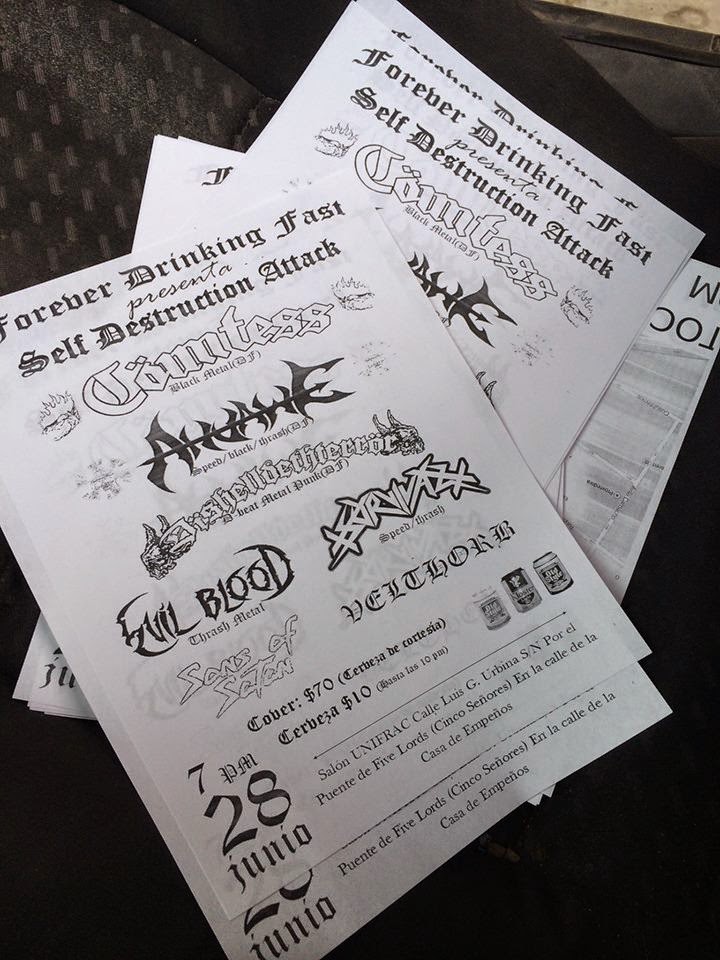 10. When can we expect a full length album and also where do you see the band heading into musically during the future?
We are not planning a full length on short or medium term, but on short term we are planning to record our first ep. I hope it gets ready before next year.
The band will continue with a raw sound and a raw production, playing riffs influenced by early Speed and 80’s Black Metal.

11. What are some of the bands or musical styles that have had an influence on your music and also what are you listening to nowadays?
As we said before, our main influences are the First Wave of Black Metal and early Speed Metal. Nowadays we like bands like Omega, Baphomet’s Blood and Midnight.

12. How would you describe your views on Satanism?

Each member has a very different view on Satanism so, as band we can’t give you our opinion.
On Ahvawe when we refer to Satan, Lucifer, etc. We are not taking seriously any of it. We pretty much use Satanism on our songs, the way Venom uses it.

13. What are some of your non musical interests?
Drink beer and bang bitches.

14. Before we wrap up this interview, do you have any final words or thoughts?

Drink till you fucking puke your liver out!!

Posted by OccultBlackMetal at 10:15 PM