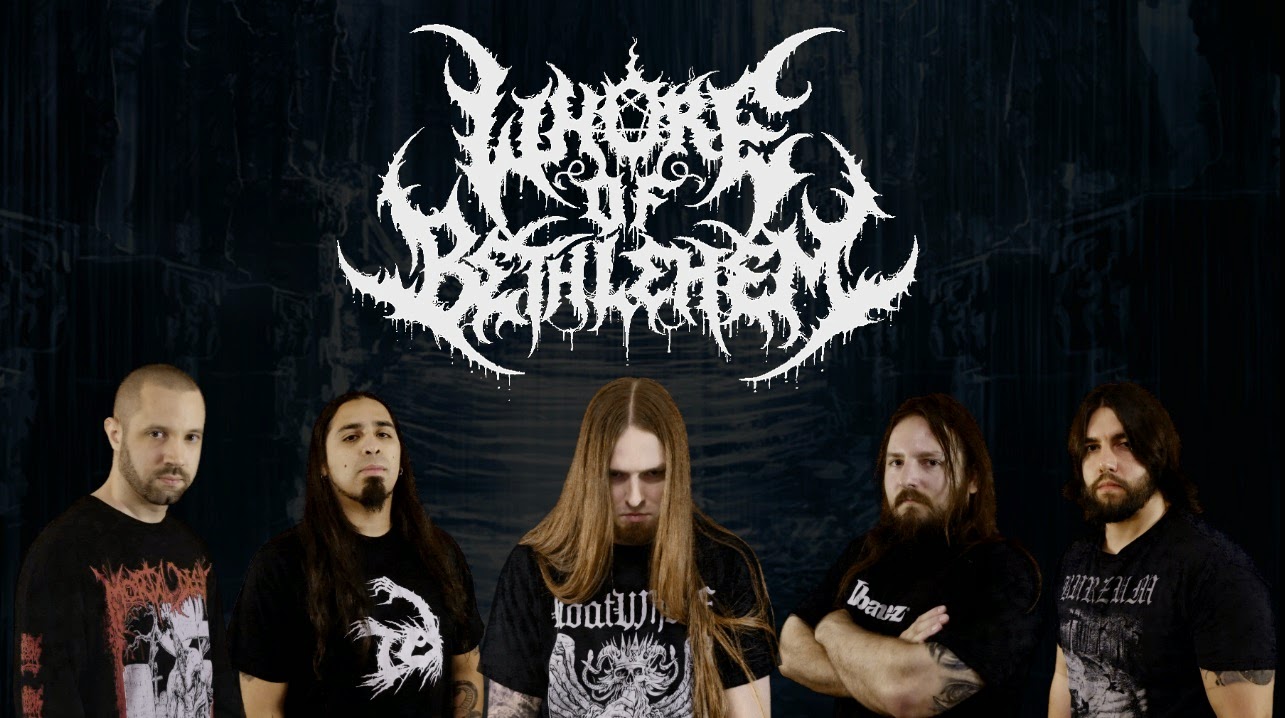 Since the album has been released we've been gigging around Texas to promote the album and have had a great response. Even though the album was only recently released, we haven't really slowed down on writing. We have half an album worth of new material already and we're completely stoked with how intense the new songs are.

2.In May you had self released your first full length, how would you describe the musical sound that is present on the recording and also how does it differ from demo you had released in 2012?

We are all very satisfied with the way the album came out. It has top notch production, everyone performed great, and it's aggressive from start to finish. I'd say the major difference from the album and the demo is the musicianship is a little tighter and the lyrics/vocals have changed due to a new vocalist and second guitarist.

3.Your lyrics cover some satanic, occult and anti christian topics, can you tell us a little bit more about your interest in these topics?

I've covered many topics in the different projects I've been in over the years. I got the opportunity to front WoB and decided to completely change the lyrics to make them more evil and anti christian to match the theme of the band. None of the members of the band are vehemently satanic or anything. I'd say we lean more toward the atheist route in our personal lives and have a general distaste for organized religion. The majority of the band grew up listening to bands with evil themes/lyrics like Slayer, Deicide, Dark Funeral, etc... So evil death metal is inherently in our blood.

4.What is the meaning and inspiration behind the name 'Whore Of Bethlehem'?
The name was brought about long before I was a member of the band. The guitarist (and original vocalist) Ryan had been trying to come up with a blasphemous in your face name that would stick in peoples minds. He happened to catch a set by the band Archgoat and was inspired by them so he decided to name them after one of their albums. Our sound differs from theirs quite a bit, however.


5.What are some of the best shows that the band has played so far and also how would you describe your stage performance?

Some of the best shows we play are shows that have mixed metal genres when it comes to crowd response and exposure. We also recently played the Building Temples from Death fest and had some killer pit action. However, our most memorable thus far in my opinion is the show we played with Nile. They were touring by themselves and we were the only other band for that particular gig, it was a great time. My drummer thought it would be funny to try and get Karl Sanders to sign his autograph on a picture of himself with Gary Busey's face photoshopped on it. At first glance he was going to sign it and then he noticed those gigantic Gary Busey chicklet teeth. Needless to say, he declined to sign his autograph. We all had a good laugh on that one.

6.Do you have any touring or show plans for the future?
In October we're a supporting act for the Carnival of Death tour in Austin TX with Suffocation, Kataklysm, Pyrexia, Internal Bleeding, and Jungle Rot as well as the Deicide tour with Septic Flesh, Inquisition, Absmal Dawn, and Carach Angren. We have some unannounced fest opportunities on the horizon in the U.S... Also, in November we are taking a mini tour hitting 5 different states in 6 days . We will be performing alongside some great acts including Cancer Whore, Unmerciful, Face of Oblivion, Disinter, and many others...

7.Currently you are unsigned, are you looking for a label or have received any interest?
We are a hard working band and self released our album because we couldn't wait around for label offers. I feel that legitimate labels want to see the band put in the hard work and invest the money, skill, and effort on their own before the label decides to invest in them. And so hopefully this release can snag the attention of a promising label looking for our unique brand.

8.On a worldwide level how has the feedback been to your music by fans of black and death metal?

So far the response that we've gotten has been great... We are selling our album through our website via physical copy and digital download and also through our bandcamp. We haven't gotten worldwide distribution just yet, but that comes with a label. We've just begun to scratch the surface.

9.What is going on with some of the other bands or musical projects these days that some of the band members are involved with?

For the most part, everyone has put their other projects in a state of hibernation or quit entirely. Our drummer Rene and guitarist Ryan have a band called Scattered Remains that has been put on hold to make time for WoB. Phil King has a couple personal recording projects that he brings back to life from time to time to exploit his musical creativity but they aren't full bands. He also used to play 2nd guitar in Disfigured (also with Rene on drums) but the band has since retired. I (James) had a band called Perversum that released a demo and fell apart shortly after. I also replaced Shawn Whitaker in Uncleansed for a couple years before quitting and joining Whore of Bethlehem. Rene is still active in Flesh Hoarder and plays session live drums for Diminished.

I feel we've found our unique style and we plan on staying true to that formula to some extent. The material we've written for the second album so far has been faster and more crushing but definitely embodies the same sort of feel that we achieved in the first album.

11.What would you consider the top 5 albums for both death and black metal?
I'd say for me personally my top 5 for death metal would be...
Monstrosity- In Dark Purity
Deicide- Once Upon the Cross
God Dethroned- Ravenous
Suffocation- Pierced from Within
Nile- In their Darkened Shrines
and for black metal I'd say...
Dark Funeral-Diabolis Interium
Naglfar- Sheol
Negator-Panzer Metal
Dimmu Borgir- Puritanical Euphoric Misanthropia
Infernal War-Redesekration: The Gospel of Hatred and Apotheosis of Genocide

12.What are some of your non musical interests?
I'm a big fan of traveling and hiking/camping. The guitarists and bassist are big gamers. Our drummer is into sports and also is an admin for a facebook page called "putting lars ulrich's face on things." Any ridiculous picture you can fathom seems to become even more absurd with ol' lars plastered on it.

13.Before we wrap up this interview, do you have any final words or thoughts?
Yes, thanks for your interest in Whore of Bethlehem! If there's any fans out there be sure to check out our website for merchandise and up to date info on the band. Also anyone interested in hearing the album streaming can do so at our bandcamp page. Keep it evil and keep supporting extreme metal!
www.whoreofbethlehem.com
http://whoreofbethlehem.bandcamp.com
Posted by OccultBlackMetal at 12:14 AM