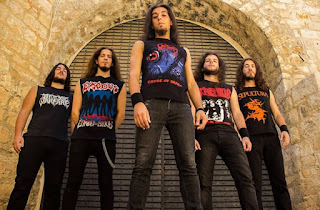 1. Can you give us an update on what has been going on with the band since the recording and release of the new album?
Hey guys and thanks for the interview. Things are doing great for Biotoxic since we’ve released our debut album which has gained enormous feedback from the audience. We’ve played some really killer gigs both in Crete and Athens and in the meantime, we are arranging a few more live shows along with working on some new stuff for our 2nd album.

2. Recently you have released a new album. How would you describe themusical sound that is presented on the recording and also how does it differ from the ep that was released a couple of year backs?
Lobotomized can be described as a mix of old school, mostly, German-style, thrash metal with some old school American death metal. A listener can also identify dark melodies, shredding guitar solos, punishing drum beats and advanced technic guitar riffing which will, surely, attract them. Although, there is a deep musically connection among our first EP and our debut album, we can say that our latest accomplishment has nothing to do with our very early steps. The song arrangements are more mature and well elaborated, as we, as musicians, are evolving and maturing every day and we emphasized more in the overall production and the sound quality along with Vaggelis Theodorakis from Revolted Masses who took up the mixing/mastering process. We try to overwhelm our powers with every new project we are involved into, and we think that Lobotomized is a very representative example.

3. What are some of the lyrical topics and subjects the band explores with the music?
The main lyrical theme of the band is the strictly opposition with any organized religious cult or spiritual movement which uses tools of fear and propaganda to control the masses and restrain the free thinking. We, also, lyrically oppose to every political party which is doing the same. Through our lyrics, we call the people to rise up, stand for their beliefs and be masters of their own existence. However, we also drain themes from everyday life, society issues and generally, everything that draws our attention and worth being expanded in our songs.

4. What is the meaning and inspiration behind the name 'Biotoxic Warfare'?
Actually, it’s kind of a funny story. In our early days, we were gathered up, trying to come up with a name for the band. After endless hours of searching, we were totally fed up and just wanted a name to end this story. So one of us said “Biotoxic” and the others added up “Warfare” as a tribute to the Slayer masterpiece “Chemical Warfare”.  It was sounding cool and thrashy, so we decided to keep it.

5. What are some of the best shows that the band has played so far and also how would you describe your stage performance?
One of the most memorable shows was, definitely, our very first stage appearance, on January 2013, in Athens. The crowd went nuts from the first note and that gave us “thirst” for wanting more. Another remarkable performance was took place in our debut album release live show, where the audience moshed so hard that the venue owners had to cut up our show before we managed to complete it, to prevent injuries and further damages. Also, we had some unforgettable live moments sharing the stage with well-known acts as Enforcer and Suicidal Angels.

6. Do you have any touring or show plans for the future?
There are plans for some shows to be held outside of Greece in the nearby future, but we cannot provide further details, as nothing is 100% organized yet. However, stay tuned for more!

7. You have participated on a Death tribute album, what was the decision behind doing your own version of one of one of their songs?
The whole idea about participating in a Death Tribute Album came to us from a friendly band who was also participating and they were looking for some more bands. We instantly took the offer, as Death is one of the bands that has inspired our musical identity and we figured out that it was a good way to pay our respects. We choose Evil Dead, because not only it’s one of our personal favorites, but also, it is one of their most fast and thrashy songs, so it fits well with our style. The result was more than pleasing, so we thought that it will be great idea to include it as a bonus track in our EP “Baptized In Blood And Greed”.

8. On a worldwide level how has the feedback been to your music by fans of extreme metal?
The feedback so far is more than outstanding, both in Greece and abroad. We have attracted not only fans of thrash metal but from the whole extreme metal spectrum such as death metal fans, blacksters and even lovers of smoother music genres and that is a huge accomplishment for us. Every day, we receive very positive comments for fans (especially outside of Greece); the reviews are more than rewarding (we are being described as one of the greatest upcoming hopes for thrash metal from many people!) and a lot of fans ask us arranging a show in their country. This acts as a reward for all our efforts and gives us more strength and dedication to carry on and to achieve bigger goals.

9. Where do you see the band heading into musically during the future?
As the songwriting process for our next album has already begun, we can say that the new stuff will be more violent, raw and aggressive that our previous one. Some more death metal elements will be added, the tempo will be raised, our technical level will be one step ahead, and one thing we can say for sure. If you’ve liked Lobotomized, you gonna totally love the new one!

10. What are some of the bands or musical styles that have had an influence
on your music and also what are you listening to nowadays?
We pay our great respects to the thrash scene of the 80s (mostly European but American as well) and in the American death metal scene. However, we don’t stick inside those genres walls and we are influenced from the whole extreme metal universe. Some representative bands can be the following: Kreator, Sodom, Slayer, early Sepultura, Sacred Reich, Dark Angel, Testament, Death, Obituary, Morbid Angel, Cannibal Corpse, Cancer, Bolt Thrower, Legion Of The Damned, Pestilence, Asphyx etc.


11. What are some of your non musical interests?
Although, our whole world is spinning around music and it consumes most of our time, we have other interests as well. We love hanging out drinking beers, traveling, the majority of the band’s members are into sports or martial arts, and my personal non musical hobbies are reading, fishing and reptile keeping/breeding.

12. Before we wrap up this interview, do you have any final words or thoughts?
We would like to thank everyone who is reading this interview and supported us for the very beginning. Our debut full length album is out, so anyone interested can stop by and place their order via our official Facebook page. Till next time…THRASH!!!

Posted by OccultBlackMetal at 12:19 AM