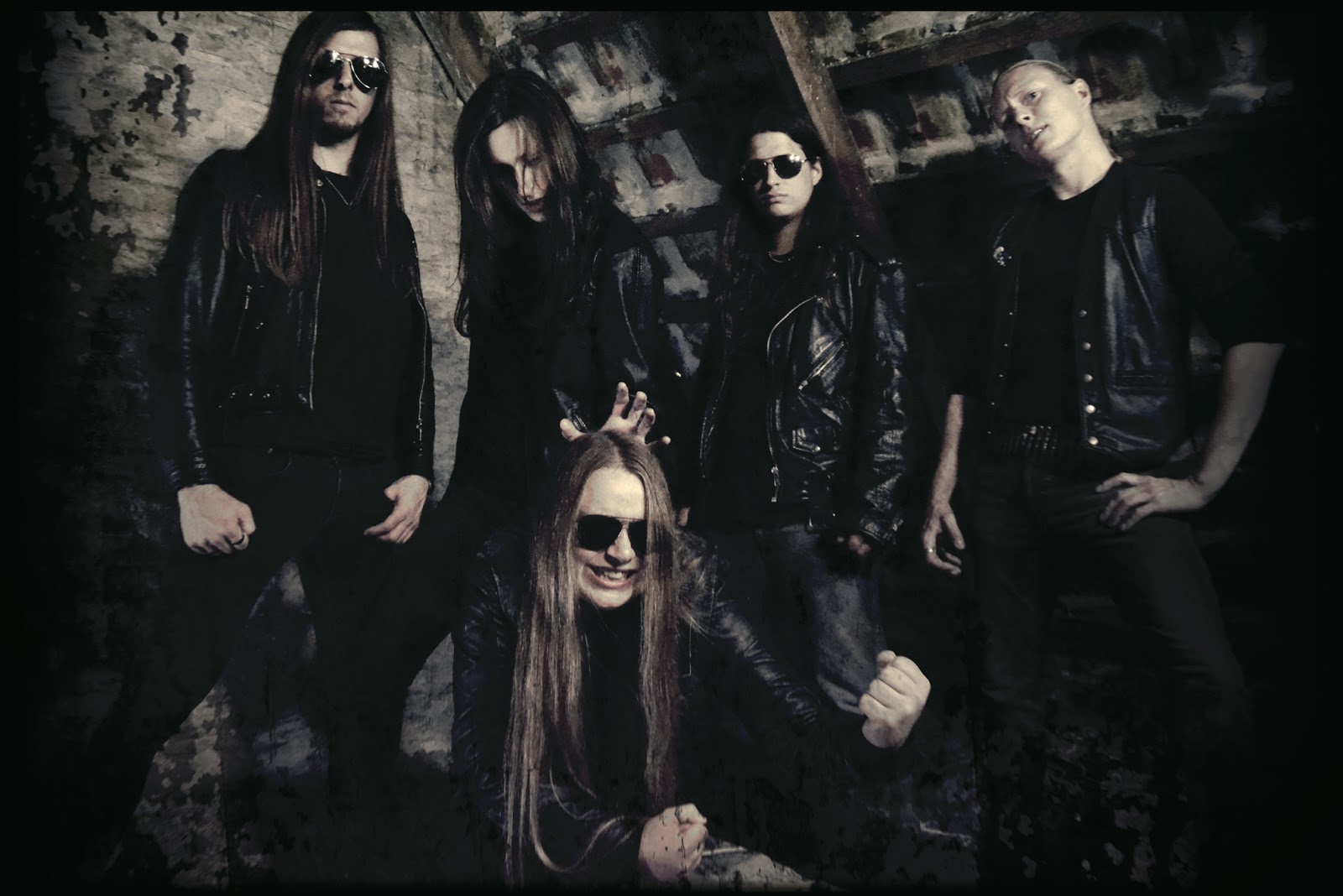 This is Anders Edalis speaking, drummer, pianist, and primary songwriter of Encyrcle.


1
For those that have never heard of you before, can you tell us a little bit about the band?

We're a five-piece, situated pleasantly in the middle of nowhere, Odense in Denmark, from which pretty much anything can happen. We play dark, speedy rock music. Most would label it metal, but metal is just a subgenre of rock music anyway. We don't think much of genres, this is probably one of the basic things about this band. It's about the freedom of expression, but derived from the spine of melodic and dangerous heavy metal.


2
In June you have an album coming out, how would you describe the musical sound that is presented on the recording?


3
The band refers to it's musical style as 'nocturnal speed metal', can you tell us a little bit more about this term?

We came up with the term more because of practical necessity rather than choice. The most common denominator between the songs is probably classic speed metal, you could say, but because we throw the dark and aggressive expressions of some of the more extreme genres into it, we put nocturnal in front. Nocturnal is also a fitting word for the lyrical content, as well as the overall aesthetics.


4
What are some of the lyrical topics and subjects the band explores with the music?

Even though our album isn't a concept album by any means, it has a sort of thematic flow. The song and lyrical progression concerns the confrontation with the destructive and liberating forces of night and its simultanous pregnancy. It's more of a mental thing, but an analogy would be the sun going under at dusk, the transition through night and the light dawning anew, creating something different. So the nocturnal aspect is very much present in the lyrics. The nights sundering powers as something productive, or the fruitfulness of death. This is our theme.


5
What is the meaning and inspiration behind the name 'Encyrcle'?

Encyrcle is a deliberate mispelling of Encircle. The pronouncation is identical, but by using the y, the 'circle' is sort of distorted or mutated. A circle is a closed circuit, but a cyrcle is something different, like the breaking of a pattern, just like a spiral is a circle, just unconfined, progressing further outwards or inwards. Our cover art is a play on the relationship between the circle and spiral.


6
What are some of the best shows that the band has played so far and also how would you describe your stage performance?

I would say that our shows are getting increasingly better as we are improving our delivery and the audience is catching better onto what we do. Everything is spiralling upwards at this moment, so the bar is constantly being raised. Recently we've begun adding an instrumental track at the start of our show, a hypnotic and bewitching piece of medieval-inspired, electronic torture-music, marking our entrance on the stage. This has been very effective in laying a sort of magical carpet over the entire thing.

Aside from this, our presence is dictated by the intensity of the music. Rather than the music being an expression of us, we are perhaps rather the vessels for the musical expression. This might sound crazy, but so much of it is unconscious. That's the magic of playing live: losing yourself in it. The music becomes the puppeteer, the players the puppets. Music is most beautiful when you are taken by it. Swallowed and destroyed, yet strangely elevated.


7
Do you have any touring or show plans once the new album is released?

The album will serve as the stepping stone that will hopefully allow us to go on a proper tour in the near future. We have already been talking about doing something in the autumn, but it requires a lot of planning. So far our longest travel will be when we go the Athens, Greece in September. Hopefully we can do much more of this.


8
On a worldwide level how has the feedback been to your music by fans of metal?

Speaking of Athens, the most visible "condensed" reception has maybe come from there. Several nice Greeks have written us, musicians, bookers, artists. But our album is released by an American label, Unspeakable Axe Records, a sub-label of Dark Descent Records. They discovered us before we knew of them, and it has become a wonderful relationship already. So things are spreading and happening pretty quickly.


9
Where do you see the band heading into musically during the future?

Our debut album, 'Encyrcle', is just the opening door through which we embark into something yet unknown. I talked about about the unconscious aspects about playing live, about being 'taken', and it's the same thing with the writing proces. You don't want to decide too much of where the music is going, because you'll limit yourself from some potentially wonderful ideas. The best ideas always spring forth spontaneously, like fish appearing from the deep, and you just have to be good at fishing, as David Lynch once said. Still, we're not going to leave the framework we've somehow set up, and the next step will be a further exploration of this quest. Encyrcle is a voyage, not a resting place.


10
What are some of the bands or musical styles that have had an influence on your music and also what are you listening to nowadays?

This is complicated in relation to Encyrcle. My musical influences range across the entire spectrum of metal, rock, classical, electronic music, whatever has searched the "lower reaches". A few of the other members have death metal backgrounds, and I have played punk and thrash metal before. I've always had an affinity for the 'japanese way' of doing well-known things differently, thinking of bands like Sabbat, Sigh, early X Japan and Sex Machineguns. I'm the primary songwriter, so I think those are some of the influences. Black metal has had a big influence too. But also, one of the songs, an instrumental one, incorperates piano together with the rest in a sort of psychotic marriage of modulations and mood changes. This shows some of the range that has made this band. As I see it, there's not a long throw from jazz, classical or gypsy-music to black metal. The other day I saw King Dude in concert. A man with an acoustic guitar that sings of Satan and love. I believe the personal reward of music depends on its mood and feeling, not the genre or instruments.

Also, recently, I went and saw the german dystopian midnight-jazz-ensemble (well, that's my classification of them anyway), Bohren und Der Club of Gore, play in Copenhagen. This jazz-band is more HEAVY than many metal bands. They said a few inspiring words after their first song: "We are Bohren und Der Club of Gore. Bohren is a german word that means 'drilling', and that is what we do." Then they continued playing. I realize now that this simple sentence sums up a lot of my appreciation of music or life in general. I like anything that somehow "drills" down to the dangerous and disturbing things beneath the surface; that destroys the layers of conscious obstruction, habit and automatic thinking. That place deep down might be uncomfortable or even terrifying to some people, and that might be why some would rather listen to pop-music or  softer, lighter things. But pop-music can reach this deep place too. You can also find contemplation of the abyss in certain Madonna-songs. I like anything that penetrates into that subterranean area.


11
Does Occultism play any role in your music?

Wow, these questions are placed in a very clever order. Because speaking of the subterranean, we of course are talking about the occult already. The word means 'hidden' or 'secret', so yes, there is a kinship. I won't label myself an occultist, magician or anything, but any literature, philosophy, movie or music that deals with these topics will have me interested. I like to call it the 'night-side', and a song like 'Evoke the Night', from our album, or the opener, 'To the End', are about the communication with this dark side where things are swallowed and patterns are broken. Also, the cover of our album, 'Chronoboros', the serpent "devouring" the spiral, mixes up several hermetical symbols. Some of our lyrics touches esoteric themes and concepts. But again, it's not a conscious choice to try to appear 'occult', but just something we are drawn to, just like Nietzsches character-type, 'the free spirit', is drawn to anything that might appear uncommon or fruitful to him alone.


12
What are some of your non musical interests?

Reading, writing, travelling, losing track of where I am, getting intoxicated. I've been writing a book of fiction beside these songs the last few years. A publishing house has showed interest in releasing it, so hopefully it will also cross over from the night-side into light sometime during the year. Oh yeah, I also like Nachos. Besides Encyrcle, the members have a Nachos-cult called 'Illuminachos'. The recipe is quite fantastic and secret. No kidding here.


13
Before we wrap up this interview, do you have any final words or thoughts?

Thank you for showing interest in Encyrcle and for spending time reading this. We've been looking forward to the release of our album for a long time, and hopefully it will speak to something deep inside you that we can help set free.