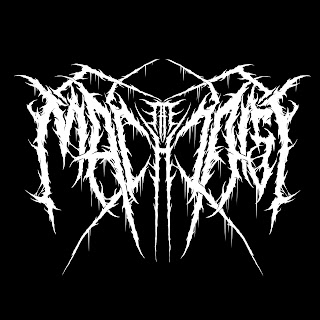 We’re from Manchester in the UK, and we play rather heavy industrial blackened death metal. We started in the latter half of 2018, but really came together with the focus of lockdown in 2020, despite not really being able to together to play shows. We’re pretty heavy,  really the best thing is to just check out our youtube channel and bandcamp, that will really tell you everything you need to know.

2.You have your first album coming out in December, can you tell us a little bit more about the musical style that you went for on the recording?

Some of it was by design, some was by accident. I’ve always been into extreme metal music and electronic music, so I wanted to combing the two! A lot of my influences are both death metal and black metal, so the form it took was more of a blackened death sound. Primarily I was indeed looking for a drummer, using the machine as a stop gap to demo songs, but after a while we really just started to explore the possibilities and the range of sounds the drum machine could offer!

Originally, I asked Scott to see if he wanted to contribute some vocals to the album, but he contributed so much and the performances were so strong, we felt having two vocalists was the only way to go!

3.Some of the band members are also a part of 'Reign Of Erebus', what is it that you bring into the music of 'The Machinist' that you are not able to do with your other band?

The focus here is really more towards the industrial sound, being able to explore the extended range of sounds overtly electronic instruments can bring you. It’s also much more heavily geared towards death metal, which of course can allow for lower tuning and deeper vocals. In our case however, we tried to make sure the blackened parts really shrieked, so we opted for 7 string guitars to get that range. Reign uses good old fashioned 6 strings because that sound is utterly perfect for that band.

Lyrically, I suppose I explore the frailty of life, our relationships with each other, and the crazy lengths our existential dread will push us to in order to feel significant.

The inevitability of entropy, the idea that on a cosmic time scale and in the cosmic arena, we really aren’t that significant. It’s something of a common idea, and to some degree with all know this, but it’s really remarkable that even despite having this knowledge, we still occupy ourselves with petty grievances, racism, and territorial pissing contests. We also waste what precious time we have on greed, institutions, religion and ideologies specifically designed to make one person feel superior over another. None of us are getting out alive, and surely that means we should make what precious time we have count!

5.What is the meaning and inspiration behind the name 'The Machinist'?

It seemed like such a fitting name considering the cold, perfectly quantised sound of the drum machine. We’re really made no attempt to try and make them sound realistic at all, and even included a lot of obviously electronic sounds like distorted 909 and 808 kicks, as well as 909 snare rides.

The stark, slightly unnerving nature of that evoked mechanical imagery, and of course a cold production was practically mandatory with that!

The brief to the artist, Roberto Toderico, was  to create an image that evoked a sense of mortality, the alien, other worldliness, body horror and lovecraftian unknowability. The symmetry and coat of arms totally too us by surprise, and we were really blown away by what he came out with. It’s one of those images where something different jumps out at you each time you look at it

7.Are there any plans for live shows once the pandemic is over with?

Absofuckinglutely! Hell.. we’re also looking into streams and live playthroughs. It goes without saying that as soon as this is over? We’ll be playing gigs

It’s been a mixed bag. Some labels are just unable to release at this time because of the pandemic, some labels have expressed admiration for the music but have just flat out said “it’s not the kind of thing we put out”. Death metal and black metal tend to be  very ‘pure’ genres, but I do find that while some listeners are “kvltists”, most are a lot more open minded than many labels give them credit for.

At this point I’m In two minds. We are in a good position in the sense that we have many platforms to get out music and news out to potential fans more than ever, despite the ever constricting social media algorithms that favour daft pet videos or bullshit fake news to art. If social media paid half as much attention to art as it did in spreading fake, enlightenment-undoing bullshit, we’d be up to our eyeballs in stunning music,

If the right label was to come along? Of course we’d be interested! Label support always helps, and we always want more like minded people to hear our music!

9.On a worldwide level how has the reaction been to your music by fans of industrial, black and death metal?

The feedback that we have has has been super positive, which is a pleasant surprise as usually people only really speak up on the net to tell you something sucks! Haha! Even those on the more “pure” end of the spectrums have been positive, and we’ve managed to get onto compilations that otherwise feature more “KVLT” bands, so its encouraging!

It’s hard to say. We’re still kinda in the embers of this record, so where we could go next could be anyones guess. I’m not one to repeat the same thing again, so whatever it is, it’ll be different, but it’ll still be extreme. I really can’t say more than that!

Bands like Anaal Nathrakh, Mayhem, The Berzerker and Emperor have all been a massive influence. We’re not afraid to slow down to really let the heaviness set as well, so bands like Amenra and Neurosis are also an influence.

As for what I’m listening to now? For heavy listening, it’s usually the classics, haha! But there are an awful lot of good bands out there! For newer stuff, right now I’m oscillating between Akhlys  and Batushka (the first album before it went mental) for black, Devourement for death and Katatonia, Officers, Salem and Boards Of Canada for everything else, but that list is ever changing.

Thank you so much for the interview and for giving us a platform to talk about our music! We hope you enjoy the album when it’s released, and when we do start to play shows, we hope to see you there!

It’s a crazy old time, so look after yourselves and each other!

Posted by OccultBlackMetal at 7:41 PM