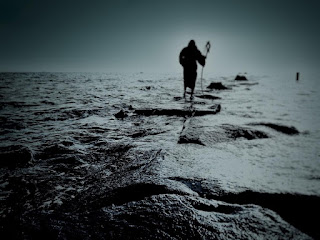 1.Can you give us an update on what has been going on with the musical project since the recording of the new album?

There hasn't been a lot happening with Crawl Below since I finished Its Ministers about six months ago.  The doom band I play bass for (When The Deadbolt Breaks) put out two records this year, a long distance project called Buried Under Sky is getting ready to put out an EP, and I've been working on an 80s lofi pop thing in between.

2.In 2022 you have a new album coming out, musically how does it differ from the stuff you have released in the past?

The new one, Its Ministers On Earth, is blackened death doom, I guess.  It's slower, more long-form.  A little more theatrical, maybe.  Not as catchy as I usually try to make my stuff.

3.With each album you also take your musical into a different direction and also change the genre with each recording, can you tell us a little bit more about the musical styles you have worked with on each release?

My past releases with CB have been blackened punk, Lovecraftian pub songs, and doomwave.  So this seemed like an illogical next step.  CB has no set style and I just dabble in sub-genres I'm interested in.

4.A lot of your lyrics cover New England Legends and the writings of H.P Lovecraft, can you tell us a little bit more about your interest in those topics?

I don't typically write political lyrics, or "love songs" (gross), or whatever, so I had to figure out something else to talk about.  I've found that I like artists that write specifically about where they're from.  Plus, New England has so many creepy little stories.  As for Lovecraft... I'm a firm believer that Lovecraftian metal has been done to death, and I'm saying that as someone who's had four or five HPL focused bands.  That being said, I'm a massive HPL guy.  My right leg is tattooed toes-to -hip with Lovecraftiana.  I live 40 miles from Providence.  My wife makes fun of how many Lovecraft statues I have.  So... in my case, it's not only laziness that lead to the topic, but also a genuine love and obsession with all things HPL.

5.What are some of the other lyrical topics and subjects you have explored so far with your albums?

The first one was generally about the creepy underbelly of New England, and about being a weird hardcore/metalhead amongst a lot of normal people.  Embracing the weirdness, I guess.  The second one was Lovecraft pub songs inspired by The Pogues and The Dubliners.  I hope to perform them in a dingy seaside dive bar or cave one day.  9 Mile Square was about Norwich CT, where I live, and its legends.

6.What is the meaning and inspiration behind the name 'Crawl Below'?

I guess it's a metaphor about digging into the darkness under the surface of everyday life.  And being generally "underneath".

Yes, that is a woodblock carving of a "sea monk", a mythical creature that was identified as part fish, part human.  Of course, I'm sure it was just some big fish or shark but it sure does sound Innsmouthy.  All the other art inside the CD was shot by my wife, aka Ye Olde Gothick Wife, at the Seaside Sanatorium in Waterford CT.

8.With this project you record everything by yourself but also have experience playing in a band with a full line up, do you feel you have more freedom to express yourself musically working by yourself?

Well, yes, but Crawl Below is music I've written that I don't want to burden anyone else with.  I know a ton of musicians that would probably help if I asked but we're all busy with actual bands and stuff so I'm "keepin' it bedroom", if you get what I mean.  I'm not super ambitious about CB.  It'd be great to just find a handful of people on the planet that are into it.

9.Currently you are signed to 'Lawnmowerjetpack Records', can you tell us a little bit more about this label?

Lawnmowerjetpack Records is a label started by my childhood friend, Rodney Johnson, who aside from singing in the band Lawnmowerjetpack in the early 2000s, has absolutely nothing to do with music. Which is perfect, because LMJP Records specializes in lofi, low quality, extremely niche projects that no one wants to hear.  I'm right at home.  He runs it out of a bedroom in a trailer park. It is perfect.

10.On a worldwide level how has the reaction been to your recordings by fans of underground music?

Honestly, kind of surprising.  The local scene, which I love, is usually like "Oh, that's just Charlie, he puts out an album every month."  But I've had some really nice reviews and messages from people all over the place that are really into certain albums (usually 9 Mile Square).  I never thought I'd be mailing discs to France or Scotland, for instance.  Like I've said, I know my stuff is nichey and I'm not looking for "success", or "acceptance", or people to say "Oh yeah, I actually listened to it."  So when someone does, that's all I can ask for.

11.Where do you see yourself heading into as a musician during the future?

Right where I am, recording stuff in my room and playing out at little bars with friends on the weekends.

Aside from plugging all my projects, just thanks for the interest and educated questions.  I appreciate it.

Stuff I have going on besides Crawl Below: two new albums by When The Deadbolt Breaks (one on Argonauta Records and the other on Electric Talon), an 80s sadpop thing called Low Moments, Animal Schoolbus (death/grind band with my 10y/o daughter), new EP from Buried Under Sky (metallic hard rock with members of Red Tide, Tyrant Trooper, Deadeyesunder and Otep), and... I can't remember.  There's more but I can't remember.  The next Crawl Below will likely be in the vein of 9 Mile and it's up next after the Low Moments CD.

Posted by OccultBlackMetal at 8:37 PM