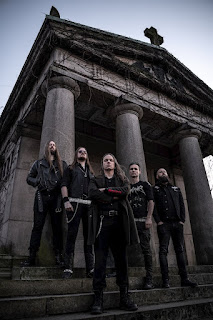 Greetings and thanks for your interest in Grand Harvest!

Well, way too little in our opinion. The pandemic really screwed us over in terms of timing and longevity. The album was recorded just at the start of this two year long involuntary hiatus on the music scene… We did manage to play live and make our live album Vesperae Laesae Maiestatis Coronae, in front of a sitting audience of 50 people. We also had a lot of time on our hands to write new material, which means that album number two is already being worked on.

2.During the end of March you have your first full length coming out, musically how does it differ from your recordings?

It doesn’t really differ that much from what we’ve put out earlier. We have only released songs that are on the album before, either in demo or live form. The older songs that haven’t had the right feeling and atmosphere have simply been left out.

The biggest difference is the sound and mix, which has been pinned down by our manager and extreme metal sound genius Tore Stjerna. What he did to the material after it was recorded is staggering. It’s a massive wall of darkness and overwhelming bleakness that hits the listener from start to finish.

Another thing that sets the album apart from previous releases is the CD version, we’ve gone all in on this one and it’s filled with art and layout work associated with the lyrics and overall themes of the band philosophy.

3.The new album was recorded in 2020 but you waited until 2022 to releases the recording, can you tell us a little bit more about the delay?

Because of the pandemic we didn’t have much choice. The idea to start with was also to find a label to work with and that went very slowly. Some offers and great feedback turned up, but nothing that didn’t mean huge sacrifices in terms of our ideas for the release. The compromises in terms and conditions, as well as time schedule (like “we can release it after summer 2023”) just got too much. So eventually we changed our perspective to doing the release ourselves, which meant a lot of work and costs. When all that was finished, we set a date a few months ahead and here we are.

4.A lot of your lyrics cover Luciferian Gnosis and Occultism themes, can you tell us a little bit more about your interest in the esoteric arts?

That’s correct, the whole thematic framework of the band’s lyrics and visual presentation revolves around these subjects in one way or the other. This construction is mainly built around the philosophy of our singer and lyricist Dr. Häll. He’s a scholar, writer and practitioner within these realms since years and years, which makes it all both authentic and thought through.

For the rest of the members this is of great interest to some, and less to others. But we all have a great respect for the lyrics and the powers with which they communicate, and that the music helps to invoke.

5.The singer also has shown a huge interest in philosophy, mythology and history do you feel this also adds more diversity to the ways the songs are written with all the research and effort that are put into the topics?

Definitely. The fact that Dr. Häll has all this knowledge and uses it in the lyrics give the words themselves several layers. All the songs are filled with references to literature, philosophy, religious and occult text and so on. The listener/reader will find new ones even years from now.

6.What is the meaning and inspiration behind the name 'Grand Harvest'?

The name is a reference to “Armageddon” and the end of mankind. It should be perceived as the harvest to end all life, when Death reaps his sickening harvest for the last time. References to “The Grand Harvester” and other harvesting-themes are present in our lyrics and its symbolism can be found in our band sigil containing the scythes and the Omega, as well as Death’s holy number XIII.

Gladly! The cover also has obvious signs of the final harvest theme. The inspiration for the cover is a painting by Antonio Rizzi from 1914 called Alarms at twilight. We really liked the bleak and sinister despair of the original, so we asked Chris at Misanthropic-Art to make his version of it and it turned out very well indeed. We have less war references and more general feelings of post-apocalypse in our version. The cover reflects the music and lyrics well and the colour scheme makes it stand out a bit in the myriad of black/white/red metal covers out there.

8.Most of the band members also have experience playing in other bands, what is it that you bring into the music of 'Grand harvest' that you are not able to do with your other groups?

Grand Harvest is a band that get things done and is a large investment of both time and money from us as members. It’s definitely the main band for all involved. The thing that I personally think separates Grand Harvest from other bands I’ve been in is our attention to detail, from music and lyrics to layout and aesthetics, as well as our high level of organization.

9.What are some of the best shows that the band has played so far and also how would you describe your stage performance?

The biggest and most interesting performances thus far must be the support slots we did for Sinmara/Svartidauði and Necrophobic/Avslut. We worked very well with these bands both musically and personally and hope we get to perform together again.

Our stage performance is tight, intense and ambient. We always give it our all. The esoteric elements and overall aesthetics are omnipresent, and we always try to think of ways to improve the stage setting. The goal is to never be just a band playing music. It’s in a live situation that the energies in the music and lyrics can resonate within the band and project onto, and into, everyone in the audience.

10.Do you have any touring or show plans for the new album once it is released?

We have a release show planned here in our hometown of Malmö on March 26, together with Voodus and Cursus Bellum, to celebrate that the album is finally out. There will also be a date in Stockholm some time during spring. Naturally we hope to get out and tour in support of the album, but we have to see when that could happen. Many of the festivals and tours have been planned and booked for over two years and it’s not until now they can actually take place. This makes it a bit hard to book and plan new things. We just have to wait and see what’ll happen. We’re always hungry for chances to perform.

11.On a worldwide level, how has the reaction been to your music by fans of underground metal?

The reactions from reviews and listeners have been very good so far and we can see the word spreading in the underground. It feels good to finally get some acknowledgement after a pandemic stand still and such a long wait to release the album. We’ve hired some help with the promotion of the album and that has given us some reviews and a few interviews. I think the knowledge about the band is slowly but steadily growing out there.

For example, we had a proper boost when the YouTube channel Banger TV featured us as one of the five most anticipated albums of March in their segment Metal Monthly and then again when MetalSucks wrote about the album. Hopefully there’s a few more reveals like that in the near future. We have an interview in Sweden Rock Magazine (Sweden’s biggest metal magazine) coming up, which should give a small push in Sweden. So far, the biggest breaks have been in the US, which is a bit surprising to us but not less welcome of course.

We have very much found our sound during the writing of this debut album. What can be expected henceforth is well represented in the songs Sol Maledictor, No Paler a Horse and Consummatum Est for example. Doomy and relentless Death Metal with some severely dark Black Metal hints here and there is the direct way to talk about it. What will probably change the most on the next album compared to this one is that there won’t be any songs that are more pure or classic in their Death Metal style, like for example Fatehammer or Crowns to Ashes – Thrones to Dust.

13.What are some of the bands or musical styles that the band members are currently listening to nowadays?

This could easily turn out to be a huge name-dropping list, so I’ll try to keep it relatively short. While we all enjoy the old stuff we all grew up with, like Bolt Thrower, Dissection, Emperor, Candlemass, King Diamond, Death, My Dying Bride, Tiamat etcetera, some of the more contemporary bands that the members enjoy are:

Besides these, and many others, within the metal/rock genres, the members all have reasonably wide tastes in music and there’s electronica/synth wave/EDM as well as country/americana, melodic rock/AOR and acoustic/singer-songwriter stuff thrown in the mix.

Thanks again! I encourage all readers to like and follow us on Instagram, Facebook and Spotify, to buy our CD or a shirt to support the band and come to our live shows when possible. It makes a difference for small struggling bands. 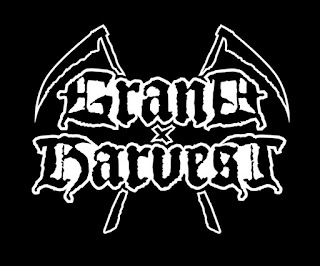