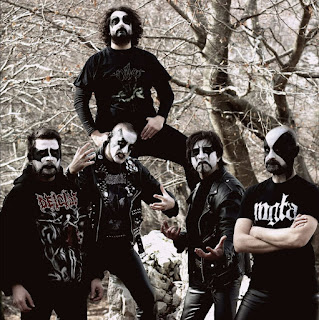 We recorded the album during Summer 2020, with an expanded version of the line-up of our latest work "Ziggurath" (2015): Chris has moved to Milan so Francesco joined us on bass, starting this new double-bass-era of Plakkaggio! After the recordings, Valerio from 666 also joined the band to re-propose the guitar harmonizations even in the live venues.

2.In March you have a new album, musically how does it differ from the stuff you have released in the past?

The new record has a very important novelty which is the use of the double pedal on drums! Thanks to Valhell who have arranged the songs with it, we were finally able to take away some satisfactions and fully explore all the genres most dear to us, from classic punk to extreme metal. The songs are very different from each other but all always maintain a certain melody and at the same time hardness that distinguish us from the early years.

3.This is also your first release in 7 years, can you tell us a little bit more about what has been going on during that time frame?

After the release of Ziggurath we dedicated a lot to live activity, plus we had formed a side project called 666 which further contributed increasing our concerts, so we realistically went back to writing songs a couple of years before Covid. Due to the forced stop we recorded under lockdown period, but we waited until now to have the possibilty to play live, otherwise it would have been too painful not to be able to propose the new songs on stage.

4.You refer to your music as being 'New Wave of Italian Heavy Black Metal Oi', can you tell us a little bit more about what this term?

Since we started to play in 2004, we decided to have no boundaries, so we tried to explore and mix all the musical styles that we prefer. So the new definition for our feelings and music is resumed in “New Wave Of Black Heavy Metal Oi!”, which is a song from our Ziggurath’s album. That’s the better way to explain our genre. The term encompasses many of our influences, from the NWOBHM of Diamond Head, Grimreaper, Praying Mantis and Angel Witch, passing through the classic Punk of Cock Sparrer, to the visceral black metal of Darkthrone and Marduk, up to the power of brutal death metal by Fleshgrind.

5.What are some of the lyrical topics and subjects the band explores with the newer music and also how would you describe your progress as songwriters over the years?

Although we are born and will always be linked to the Italian punk scene, the themes we face have always been many, especially historical themes that concern our hometown Colleferro. Certainly on the first album we explore more hardcore punk related influences, over the years we have recovered our connection with the metal of adolescence trying to create the most personal sound possible that best represent us and our passions.

6.What is the meaning and inspiration behind the name 'Plakkaggio'?

Well, the right translation in English is “Tackle”, related to the rugby matches, and we just changed the double “C” (because the correct word in Italian is “Placcaggio”) with the double KK, as a tribute to the legendary Judas Priest guitarist KK Downing.

Instead, we choose this name because for us alternative & extreme music should be like a straight and deep impact against any kind of troubles, with no fear, with no regrets.

For many years Gabriele, our singer and guitarist, has become very passionate about the world of mountaineering and has created an hiking group called "Europangea". Hence the idea of dedicating a record to the mountain in all its facets, and our great friend Riccardo Parenti, author of all our graphics which are then wisely finalized by Federica La Rude, has decided to represent, even in a figurative sense, the two ice axes useful for reaching the summit, both physically and spiritually, referring in general to the difficulties of daily life.

Our concerts start from our songs, well known by the italian punk audience, to become a “karaoke metal punk” delirium, usually!

we fondly remember our first concerts in Rome with Bloody Riot, those on shoulder to Colonna Infame Skinhead, the unforgettable opening at Sick Of It All and all the evenings together with The Last Resort. But the most important concert for us remains having played with Angel Witch in Rome, with Mantas and Tony Demolition Man in the audience!

Sometimes we also offer our songs in an acoustic and apocalyptic neofolk version, for the pub venues that can’t allow to play electric.

9.Are there any touring or show plans once the new album is released?

Of course! For now we have just planned about a dozen concerts around Italy but we are “working” for more dates. Our “Verso La Vetta” tour will start March 27th in Bologna, because our album will be available on March 25th through Time To Kill Records & Hellnation Records. We will be playing also in Pescara (02/04), Milano (08/04), Padova (09/04), Taranto (24/04) and Rome (11/06). But many more dates are coming… See you there!

10.On a worldwide level how has the reaction been to your music by fans of metal, punk and hardcore?

Surely the fact that we sing in Italian does not help us much to make our music enjoyable abroad, but for us it is absolutely vital to use our language to express our vision of the world. We clearly hope that with this album, wisely recorded by Marco Mastrobuono and Matteo Gabbianelli at the Kutso Noise Home / Kick Recording studio, we will be able to reach even the boys abroad, as it is full of heavy metal punks!

We can anticipate that the next album will be a concept about Space, we already have a working title, because our hometown has been elected European Space Capital 2022.

Musically we intend to take the songs even more extreme, both at a melodic level and at the same time of speed, violence and riffing!

We are music-sick collectors, it would be absurd not to mention all our favorite bands: Iron Maiden in the first place, Metallica, Megadeth and Slayer! All mixed with the historical black metal bands Marduk, Satyricon, Emperor, Immortal, Mayhem. We also grew up with English punk, the Misfits but above all the Oi! Italian from the 80s, and let's not forget all the old school American death metal, the dark Italian prog of the 70s, something well selected neofolk and all the NWOBHM. We are currently very excited about the new black metal wave, such as Mgła, Kanonenfieber or Kekht Arakh.

We want to thank Roberto Gagliardi (Hellnation) and Enrico Giannone (Timetokill) for believing in us releasing the album, Marco Mastrobuono and Matteo Gabbianelli for the recordings at Kick Recording Studio / Kutso Noise Home, Martina of Sanda Movies for allowing us to make the our first official video that will be released in April, Enrico Zanza always at our side for the photos, Riccardo Parenti for the graphics and Federica La Rude, our eternal friend, for finalizing them.

Just one last sentence: TOWARDS THE TOP! (VERSO LA VETTA!)

Posted by OccultBlackMetal at 3:49 PM