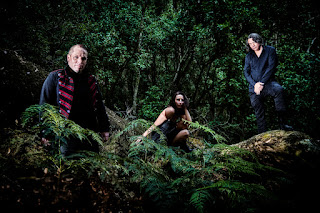 The album was only released a couple of months ago, and since then we've been working on filming and editing the new music video for the track "The Blazing Tempest", which officially launched on 17th August (https://youtu.be/Y06s1_tR8xI), releasing new merch and we're also setting up new backing tracks in preparation for live shows, and trying our best to promote the album as much as possible.

2.A few months back you had released a new album, musically how doe sit differ from the stuff you have released in the past?

It's not too different from past recordings, really.  The album is more akin to the first EP and the first album in terms of style.  It still uses the same formula of blending light with dark, i.e. Growls and female voice, acoustic and string passages and dark doomy riffs.  Song go for as long as they go for, following feeling, and not restricted to time.  Lyrically the music has taken on a more aggressive and sardonic than previously, however with about 17 years of things on our minds festering away, the album became more of a pressure release of past and more recent thoughts and feelings.

3.This is also your first release in 10 years, can you tell us a little bit more about what has been going on during that time frame?

Its the first album in 17 years, and the first release since our single "Reignstorm" (https://youtu.be/4PraYSxM9LM) released at the end of 2010.  During that time frame, I did the usual things you might do in their late 20s / early 30s - start a family and provide for them, etc. but I also travelled the world living in Africa, UK and Middle East for almost a decade in total, with lots of European travel in between.  Once returning to Australia, I re-formed the band in 2018 and it took several years to find the right members, rehearse then write and record new songs.  It had been so long since I had even picked up a guitar that it took a while to get back in "the zone".

4.What are some of the lyrical topics and subjects the band explores with the newer music and also how would you describe your progress  as songwriters over the years?

I would not really say that I have progressed too much as a songwriter, but I now know exactly what I want in terms of production quality, and will try not to compromise.  I would say the aim for the album was to regress back to the style I created when I was 18 to 24 years old, i.e. the early Elegeion style, which to me is the true style of the band.  Doing this was pretty easy as I am technically no better a player than back then (and still use the same old guitar!), and I still love writing long meaningful songs, that traverses both darkness and light.

As for lyrical topics and subjects, the album covers such subject matters as: The hypocrisy and forcefulness of religion, coming to terms with being the victim of violence experienced in past relationships, protest and the standing up for one's rights, the "Black Summer" bushfires of 2019/20 in Australia and most recently the pandemic and its revelations on the human condition and character.

5.Wha tis the meaning and inspiration behind the name ‘Elegeion’?

Elegeion is an ancient Greek word describing a sad and mournful song or oration given at a funeral.  I recently found in an 1867 dictionary that it meant “a funeral poem”.  I first stumbled across the work back in the early 90s in the liner notes of a collection of classical songs, and the name stuck, eventually becoming the band’s name due to it aligning with our lyrical direction of the time.

The gatefold cover art is the culmination of all the separate artworks inside the album booklet.  Inside the booklet, we commissioned an artist to draw a picture for each track, with the cover being a combination of all separate themes.  The main character on the cover is the girl depicted in the booklet for the song “Plight of the Heretic”.  In the booklet she is blindfolded and shackled in chains, led by others.  On the front cover she can see, and is free to choose her own path, which symbolises being free from the shackles of institutionalised religion.

Haha, interesting question!  We’ve only played two live shows in the band’s 27 year history!  In Melbourne and Sydney.  Our Melbourne show was our best, as the venue was sold out.  All I can say now is that we’re preparing to play live once more and hopefully do more shows in more countries than before.

Our plans are simply to be ready to play live which would be a great achievement for us.

9.The new album was self released but you have worked with a label before in the past, are you open to working with another label again in the future?

Yes it was self released.  We have been on several labels in the past and we're open to working with labels again in the future however it would all depend on the deal the label has to offer.  Regardless, it has performed beyond our expectations for a small independent release from an obscure band.

10.On a worldwide level how has the reaction been to your music by fans of black, doom and gothic metal?

The reaction has been overwhelmingly positive to date.  We've had over 6000 views on YouTube since May 1 (https://youtu.be/YijlYmqtHYg) which for us is fantastic.  The new Music Video is doing well and we've had a lot of messages and emails with great feedback.  Its been great to hear from old fans from the 90s and 2000's who have been patiently waiting over a decade for this album, and so flattering to know they are still wanting to hear our new music.

Into the future we will be heading in a similar direction however probably a little more maturation in our song writing.  I have already written another full album that we're demoing and writing lyrics for, so a follow up album may not be too far away!

In the beginning, I really had only a handful of influences: My Dying Bride, Henryk Gorecki, the 3rd and the Mortal and diSEMBOWELMENT, plus many many riffs I had written for my Black Metal band Greydawn before Elegeion started.  In '95, I started writing music for Elegeion by slowing down my old Black Metal riffs to down stroke picking only, which is now characteristic of the DSBM style, so I guess early DSBM bands (before the DSBM term was coined) like Abyssic Hate, Burzum's Filosofem and more recently the band NONE would be not necessarily influences, but riffs and a song style that I have an affinity with and listen a lot to.   At the moment I am listening to the old guard as always, like Profanatica, Draconian, Saturnus, Samael (old), Sepultura (old), Havohej, Belial, Shape of Despair, Swallow the Sun, Katatonia, Vahrzaw, Bathory and newer bands like Imminence, Oceans of Slumber, Forest of Shadows and None.

Thanks so much for taking the time to interview us, if any readers are interested to hear more, we're on Spotify and YouTube, and you can buy CDs and out new range of hoodies and t-shirts from elegeion.8merch.com, and CDs and Digital downloads from elegeion.bandcamp.com.  Thanks for your support and spread the word!

Posted by OccultBlackMetal at 6:37 PM