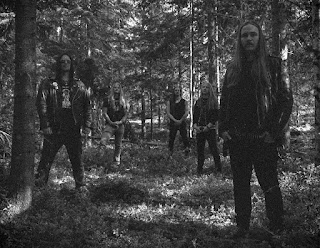 We're a blackened death metal band from the northern part of Sweden formed in 2017 and have so far released two demos. And we're just about to release our first full length album this September titled 'Covenant of Death'.

So far you have released a demo and a full length, musically how do they both differ from each other?

Not quite, we have released two demos and they're both in the same vein musically, but the latter one has better songwriting and we put more work in the production.

What are some of the lyrical topics and subjects the band has explored so far with the music?

The usual topics are often about death, darkness, and anti-religion.

I know that the band's name means 'agony' in Swedish, how does this name fit in with the musical style that you play?

We wanted something different when it came to the name of the band, and since we're from Sweden we decided on a Swedish name. The name suits our musical style well as it reflects in the lyrics as well in the music.

Can you tell us a little bit more about the artwork that is presented on the new album cover?

It is done by an American artist that goes under the name 'Misanthropic Art', he also did the cover for our second demo and our current logo.

What are some of the best shows that the band has played so far and also how would you describe your stage performance?

We have had the fortune of opening for some very good bands as Naglfar, Entombed A.D and Merciless. The Merciless gig stands out because it was our debut gig and the most memorable one to date. We try to channel the topic of our songs and the atmosphere of the music in an energetic and chaotic way on stage.

Do you have any touring or show plans for the future?

Not as of this moment, no. We hope to get out and book some shows in the near future.

The new album was released on 'Majestic Mountain records' a label that is mostly full of stoner and doom metal bands while your musical style is completely different, where do you feel you fit in on the label?

We got contacted by 'Majestic' and noticed right away that we would stand out musically on their roster, but we don't see that as a problem at all. They have been very supportive and professional from day one, and we couldn't be happier.

On a worldwide level how has the reaction been to your music by fans of black, death and thrash metal?

People from a lot of different countries has reached out to us and the reactions has been overwhelmingly positive to the demos and the latest single from the upcoming album. Now with a label backing us we of course look forward to reaching a lot more people in the future.

Where do you see the band heading into musically during the future?

We're currently working on new material, and even though we're in the early stages, the new material has more of a black metal feel than our previous songs which has alot of death and thrash influences.

What are some of the bands or musical styles that have had an influence on your music and also what are you listening to nowadays?

We are mainly influenced by older bands in the black and death genres such as Dissection, Morbid Angel and Marduk.  Some of the newer bands we're listening to are Tribulation, Gatecreeper and Ultra Silvam.

Before we wrap up this interview, do you have any final words or thoughts?

'Covenant of Death' will drop September 30th and will be available digitally/cd/vinyl. Pre-order the album through Majestic Mountain Records.

Posted by OccultBlackMetal at 6:16 PM