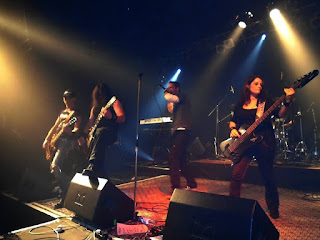 1.For those that have never heard of you before, can you tell us a little bit about the band
“V”(guitar):This group is first and foremost a meeting. People who want to make music together.
Life makes you sometimes meet people with whom you would like more than trade, which have a convergent vision of what could give a collaboration. This is true in all areas.
My Doppelgänger is the result of what might be called the ‘universal alchemy’. Five persons meets together and find that some part of their soul shines on the same wavelength, here the music. Despite different sensitivities, this vibration comes from the same source and they decide to share it.
My Doppelgänger is this common source and this vibration on the same mode.

2.You have a musical sound on the album that is very hard to classify, can you tell us a little bit more about your musical sound
It’s normal, you listen to the music created by five musicians with radically different inspirations!
If we were a panel, the panel would sweep the whole of what may be called the Rock. Since, blues to black metal, to punk, hardcore, heavy!
We refused censorship during the creation of this album. So each piece bears a panel after all, we tried to mix for each of us found inside.
This is also the concept of this album. As the complexities of the human brain, you travel the great American western to the steppes of Russia, through a rainy day in Tuscany, in the tent of an abandoned circus... in short, a world in a cranial box.
It’s socially correct to want to categorize each person. Music, our music wants to escape.


3.What are some of the lyrical topics and subjects the band explores with the music
Who are you? How to live in a society whose codes you are strangers whom you naturally can not join.
So you're dissolved in the mass, but your own nature reappeared whatever you do.


4.What is the meaning and inspiration behind the name 'My Doppelganger'
We all have our doubles.
We are animals who try to live together. We have a face for community life and an individualistic face that causes us to act individually, as the predator that we have in ourselves


5.What are some of the best shows that the band has played so far and also how would you describe your stage performance
Doppelgänger is a brand new project! We have not made any show with this project. But we’re working on it …

6.Do you have any touring or show plans for the future
We are a self production. We do not have any manager or team working to organize tour. We are working alone.
If you have some plan for a tour in the States, you're welcome!
Seriously this is one of the problems of the music today. There has never been so many opportunities to share your music. But to produce you on stage, without a label, it's very complicated.

7.Currently you are unsigned, are you looking for a label or have received any interest
Not at the moment, the album was released there soon.
Its harder to do it yourself, but then you’re proud of any little result you can get from it !
If we have an interesting opportunity, why not, we are open and aware that it would open another door to this project.

8.On a worldwide level how has the feedback been to your music by fans of metal and rock
Well you see, today, the only feedback we come from the world, as you. Beeing a french band makes it harder only in France !
Most of the French webzines are more interested foreign groups, it’s the complete oposite in Germany : they support their bands more than the others !

9.What is going on with the other musical projects these days that some of the band members are involved with
Alex(guitar) and Antoine(drums) are recording a new Lonewolf album, Will (vocals) has a lot of bands (Dusty Pain, Syr daria, Heavynessiah) and is busy with all of them !


10.Where do you see the band heading into musically during the future
We had a lot of fun to produce this album. Why not continue, the pleasure is the essence of music. Right?
We still have stories to tell, music to write and fun moments to expect !

11.What are some of the bands or musical styles that have had an influence on your music and also what are you listening to nowadays
Guns n’ Roses (and Slash’s carrier) , Metallica, Iron Maiden, but also Lynyrd Skynyrd Blackfoot, Rolling Stones, CCR, Dire Straits , Uriah Heep… As you may have heard, we love a lot of musical styles !

12.What are some of your non musical interests
Good drinks and good food (we’re French !!)
Engineering and Saab cars collecting !

13.Before we wrap up this interview, do you have any final words or thoughts
Stay wild !

Posted by OccultBlackMetal at 7:05 PM