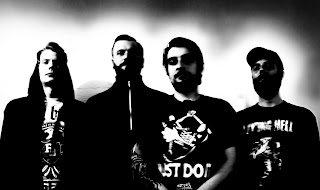 1.Can you give us an update on what is going on with the band these days?

Hey there, thanks a lot for your interest in us!! We will release our second ep soon, we are playing shows if we find the time and we already started to write new material.

2.You have a new ep coming out in August, how would you describe the musical sound that is presented on the recording and also how does it differ from the stuff you have released in the past?

hm, good question. I would describe our sound as a combination of deathmetal and hardcore with some crust influences. on our first ep we had some black metal influences as well, they are still present in our music but not on the new ep. we also wrote a very long song which appears on the b side of the ep. this song has some doom influences as well…but this is how we see our music, to sum it up: just expect some heavy tunes, whatever you want to labell them. some dude asked me if we listened a lot to clevo bands like Integrity, Ringworm or In Cold Blood. We do, yes, but it was`nt our intention to do a „clevo“ style record.

The sound itself differs from the last ep as it is fatter but also a bit rougher. We recorded it at 48 Volt studios together with our friend Philipp Salm and it was mastered by Role at die Tonmeisterei in Oldenburg. We love the result, it worked out very well and you can really hear the difference to our first ep.

3.What are some of the lyrical topics and subjects the band explores with the newer music?

Our lyrics are still inspired by poems from the late 19th/early 20th century and deal with war and all it`s abominations.

4.What is the meaning and inspiration behind the name 'Grim Vision'?

If you see what happened in the past and what happens right now in the world you will recognize that history repeats itself. We could learn from the past but we don`t want to or are too stupid or whatever…..so in our eyes the world has no shiny future. We have a „grim vision“ of what will come.

oh that´s not so easy to say. Personally I love the small shows…small venue, no stage and packed with people. We had shows like this in Cuxhaven and Bremen for example. Bandwise the best show was probably the one in Münster we played this year with Angst, EBH, Disgrace and Twitching Tongues.

6.Do you have any touring or show plans once the new ep is released?

As we are all pretty busy with jobs, girlfriends or dogs we don`t find the time to do real tour at the moment. I hope this will change in the future. We`re going play some shows this year after the release but we are willing to play more if someone is interested. It`s just a problem that I have to work on weekends too, makes it a bit complicated.

When you are younger and go to school or study it`s definitly easier to tour and stuff but when you have regular job and other duties it comes to a point where you have to decide what is possible and what not.

7.The new ep is going to be released on Bastardized Recordings, can you tell us a little bit bit about the contract you have signed with the label?

I know Marcus who works there since many years and when we recorded our first ep I just asked him if he want`s to check it out. He did and he liked it like the other guys at bastardized. We didn`t expect that and were very happy. It`s uncomplicated to work with them and we are very happy that they help us. I hope they think the same about us haha…About the contract? no comment hahaha.

8.On a worldwide level how has the feedback been to your music by fans of hardcore and metal?

It`s hard to say on a worldwide level. I know some european mailorders who sell our record so I guess some people like what we do. As we are coming from the hardcore scene we didn`t play too many metal shows to this date and I really don`t know if the „real“ metal scene would like our stuff. But we got good feedback from the german hardcore scene. I think to get recognized on a worlwide level it takes some more releases  or at least some „famous“ guys in the band and good contacts. We just do our thing and see what will come-

We hopefully manage to write a whole album and we try to mix different influences to keep the tension high.

10.What are some of the bands or musical styles that have had an influence on your newer music and also what are you listening to nowadays?

Soundwise we are influenced by swedish death metal. Bands like Dismember, Entombed, Entrails influence us and also newer bands like Young and in the way,Primitive Man or Nails for example. And we love the clevo Bands I mentioned before. Personally I love Ringworm and Integrity and as I said some people say they hear it in our music. That`s a compliment for me haha

Max loves football and  energy drinks. Bibo is fully into Beer drinking and his little puppy, Dom walks his dog as well and has a strange passion for Dr Who. I smoke weed, play with my cat and debate about football with my friends.Just the regular stuff haha

Don`t sleep about what is happening around you, open your mouth and present what you stay for. This world is a fucked up place with no future but we can at least make it a bit more comfortable for everyone.

Posted by OccultBlackMetal at 11:37 PM