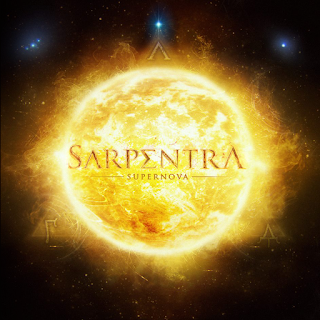 2.In March you had released your first full length album, how would you describe the musical sound that is presented on the recording?

Let the words of others be the tongue of truth

Sarpentra does not explore lyrical themes, we proclaim, we inspire, spiritualize and catalyze peoples mind!  All lyrics are a call for Improvement, Development, moving Forward for overthrowing dead or alive idols, gods and lords, and the ascension of Intelligent Man as the Master of his Life and Destiny!

4.What is the meaning and inspiration behind the name 'Sarpentra'?

SARPENTRA is a secret name of the Overwhelming High Dynamic Wisdom which brings Possibility to grasp and understand everything in the universe in the ways beyond fission of dualities. It symbolizes unity of destruction and creation as essential part of evolution and sophistication, Knowledge which ultimate goal is the blinding light of Understanding (Awareness)!

5.(What are some of the best shows that the band has played so far and also)
How would you describe your stage performance?

6.Do you have any touring or show plans for the future?

Yes, on earth and anywhere else!

Under the sign of Sarpentra there are no barriers, we can choose any path we want!
Our call will be heard no matter sooner or later and all those drowning in slumber will Rise with us!

8.On a worldwide level how has the feedback been to your music by fans of extreme metal?


9.Where do you see the band heading into musically during the future?

We aim towards new horizons both musically and intellectually.

The best, unique and ingenious from all ages

11.How would you describe your views on Occultism?

“Know, will, dare, and conquer”

They are very common - we usually like to evolve, spread and dominate

To all of you who read this: Dare! Act! Create! Never stop exploring and understanding. Be Free and Strong in your hearts and minds! And let Supernova explosion mark the rebirth of  Man into his own God!
In Strength, Beauty and Might!

Posted by OccultBlackMetal at 8:19 PM