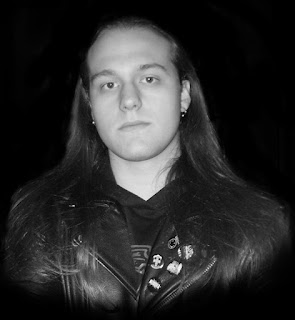 1.Can you give us an update on what is going on with the music project these days?

After the last work that came out on the 11th of June, the project being a one man band that does not play live is taking a little break from releases but is already working slowly but steadily  for the next work.

2.So far you have released a demo, ep and full length, how would you describe the musical sound that is presented on the recordings and also how do they differ from each other?

Well Rotem's demo lacked any kind of professional sound quality because it was just a small presentation of the project that was recorded to be sent to labels, the full length was a continuation of the songs and theme that were in the demo, even those songs appeared again on the full length but re-recorded and with some alterations, musically and sound wise it's a very aggressive and raw album, and it's was meant to be that way also because of the theme that is the self-destruction of mankind.
The second and last work so far the ep "Nightmare Forever" was a totally different animal from the first work I did and that's something I plan on doing with my releases because I don't want to repeat myself of fall into formulas.
In comparison to the full-length it's more heavy because I used down tuning, more melodic and groovy and it's has much more death metal elements and the theme that is horror and psychological illnesses is also much different from the misantrophy and self-destruction of

3.What are some of the lyrical topics and subjects you explore with your music?
So far i've explorerd humanity, misanthropy, politics and religion but I plan to dwell more into philosophy,history and my inner self.

4.What is the meaning and inspiration behind the name 'Rotem'?
The meaning of the name 'Rotem' is a anagram from the portuguese word 'Morte' which translates in english to 'Death , the inspiration comes from the works of the band Death because I see Rotem has a lyrical continuation of the themes that Death has left to us.

5.With this musical project you record everything by yourself, are you open to working with other musicians?

Yes I did that in the full length "Dehumanization" I had two musicians has guests, and I hope to have more colaborations with other musicians in the future too for my project because that gives a whole new life to a song I make and it's very interesting to hear other approaches other than what I do musically.

6.On the recordings you have done both Celtic Frost and Mercyful Fate covers, what was the decision behind doing your own versions of the 2 classic songs?

Essencially every cover I do is a tribute to bands I admire and have influenced me but they also have to fit the general theme of the work I incorporate them into, like Procreation Of The Wicked which I think worked great with the rest of the songs in "Dehumanization" and Come To The Sabbath" into "Nightmare Forever" that has a horror theme and what better way pay tribute to the king of horror itself.


7.The last couple of releases where released by Ethereal Sound Works and Egg Of Nihilism Productions, can you tell us a little bit more about these labels?
Of course, Ethereal Sound Works was the first label that was interested in my work and I proudly accepted to be in their artist roaster and still am because the main objective of the label is to release music made by portuguese artists, and Egg Of Nihilism Productions is dedicated exclusively to releasing material in tape format and you didn't referred but there is also my label which I created mainly to release my works completely independent from any labels.

8.On a worldwide label how has the feedback been to your music by fans of black and death metal?
So far it has been positive, and the reviews I have received for my works also have been very positive and the project seems to be turning very promising to fans and that very pleasing to hear.

9.Where do you see yourself heading into as a musician in the future?
Possibilly making better music than I do now, getting better at my craft and always trying to make something new and fresh.


10.What are some of the bands or musical styles that have had an influence on your music and also what are you listening to nowadays?

Mainly in terms of styles Death and Black metal but I try to mix those two with pretty much anything. In terms of bands there are so many that it's really difficult for me to name them all but I love and still am very inspired by many of the classics and veteran bands that we have in metal and I also like to keep an eye in the new bands on the vanguard of these days and try to assimilate what I like from them.

11.What are some of your non musical interests?
I like hiking, drawing, arts, movies, documentaries and shooting.

12.Before we wrap up this interview, do you have any final words or thoughts?
I would like to thank Occult Black Metal Zine for the support and interested in Rotem
Cheers!

Posted by OccultBlackMetal at 11:41 PM