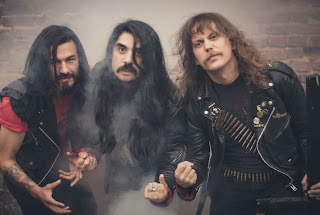 Evoke started in 2016 as a trio with Hans on the bass, Wilson on the drums and me on the guitar and vocals. We’ve known/knew each other long time before we started the band, and we share the same influences, so things went pretty smoothly musically. After we had like 5 or 6 songs we started doing some gigs here and there but after the time we played at Revolver here in Oslo we got help from Jonas Bye and Erick from “Muerto en la Cruz” to make the “Rehellshall demo”. With Evoke you can expect total aggression and pure madness.

2.In September you have your first full length coming out, musically how does it differ from your previous demos?

The full length includes 3 songs from the “Rehellshall” demo, but we made some changes and they sound much more intense and brutal. All the other songs were actually ready by the time we did our demo so they follow the same intensity.

3,This is also your first release in 4 years, can you tell us a little bit more about what has been going on during that time span?

The album was actually made in 2 weeks but it took forever because it was really hard trying to get everyone’s schedule to match to finish it up. But meanwhile I was playing with Deathhammer and did some shows with Black Viper, I also got an offer from Hellbringer to filling in on the axe for an European tour in 2018. Hans and Wilson joined Enter Obscurity just before the band decided to do a short tour around Europe after that they’ve been working on new stuff. So yeah we’ve been pretty busy playing METAL.

Ive always been interested in the occult and the power of the unknown. And of course this topic goes very well with the brutality and darkness of the music.

6.What is the meaning and inspiration behind the name ‘Evoke'?

By the time we started the band I was listening to Sabbat (Jap) every freaking day and specially the Evoke album so I guess there’s where it comes from, but it fits the band perfectly since our lyrical topics are about summoning the spiritual forces of DARKNESS. Besides its very short and easy to remember I guess.

The artist behind the artworks is Hex Graphics, he did an excellent job interpreting the title “Seeds of

Death”. I wanted a huge seed full of obscure beings inside of it, just filled with PURE malevolence and evil.

According to the christian bible the foundation for evil evoke from the Tree of Knowledge and the seed that Jehovah planted. I think the artwork illustrates the nature of that seed very well. Jehovah and The tree might be long gone, but we're making sure humanity knows that evil will keep on living, everything was planned and humanity was doomed by him from the beginning..

I think the best show was the one in Revolver cuz no one knew who Evoke was and no one knew what to expect. No talk between the song we just went brutal all the way til the end. On that night we played with Inculter and Enter obscurity.

9.On one of your demos, you also done a 'Sepultura' cover, what was the decision behind doing your own version of one of their songs?

Sepultura is and always will be one of our biggest influences and when we decided to include a cover on the demo, the choice was easy.

We’ve been receiving a lot of good feedback lately so its cool to hear that, but we’ve already started working on our second album and some things may change to the better.

Deathhamer is about to finish their new album that will destroy like always, so I’ve been learning some of their new songs. Hans and Wilson who plays in Enter obscurity started making some new stuff and hopefully they will do an EP next year.

Hard to answer that one, right now we are waiting for this fucking corona to disappear, so we can start playing gigs and promote the album. As I mentioned we’ve also been busy working on our second album, but to be honest we don’t think too much about how things should sound or be in the future.

Morbid angel, Slayer, Infernal Majesty, Sepultura, Razor, Sabbat (JAP) and many others, right now I’ve been listening to a lot of Death metal and some new cool shit like Deathwards, Toxik Death, .

Stay EVIL and let's dig our way to hell, cuz heaven is a place for COWARDS!

Posted by OccultBlackMetal at 7:36 PM