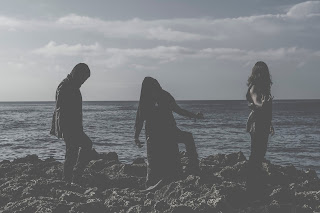 Ophion started sometime in 2017 with the definite intention of creating an extreme metal initiative identified by the universal symbol of the serpent. In the experimental and composition phase, we started to consolidate its sound under the extreme metal umbrella as Blackened Death.

2. Recently you have released your first album, can you tell us a little bit more about the musical style you went for on the recording?

As mentioned above, the musical style we went for the album was Blackened Death Metal. For this album, we wanted to emphasize atmosphere over technique, and include small doses of melodic and neoclassical elements where appropriate. The band also incorporates our interpretation of ‘ancient music or rhythms' such as can be heard in the tracks ‘Kalassa’ and ‘Grand Babylonia’.

3. Your lyrics cover ancient civilizations, mythology, and esoteric themes, can you tell us a little bit more about your interest in these topics?

In a sense, I’ve always been attracted to the old days. So, when I was able to form my own band it was quite natural to base the concepts on such themes. Initially, it was more about that feeling of awe and mystery that you get when you think about ancient civilizations, allowing yourself to step out of your own context if you will. But they also allowed me to express things that I would not have communicated as I did through the coverings of contemporary settings. You would be surprised how different the reactions are when you express an idea someone might fundamentally believe in when you use times removed from their own as a reference.

Anyhow, by the hand of circumstance, so to speak, and through the writings of occultist philosopher Manly Palmer Hall, I came across what for me is the quintessence of the past – the very thoughts and ideals of its sages and nations. These thoughts, along with ancestral recollections, and certain cultural impulses, are expressed through what we call mythology – perhaps ‘’the history of prehistoric times’’. Nearly everything else –artifacts, buildings, and monuments – though fascinating, are but the remaining bones. Ideas are the meat, or better said, the spirit of it.  And it was through Hall’s work that I first got interested in the ‘mythological’ Atlantean theme, which is one of the central topics of ‘Antediluvian’; the other being the universality of the serpent.

As regards the term esoteric as applied to the context, it is best defined in the philosopher’s own words from his lectures on Esoteric Anthropology (min. 4:00). He states that esoteric relates to ‘’certain neglected possibilities in knowledge; something obscure; some part of knowledge that is darkened, that may arise from common neglect and through a long period of time...passes out of fashion, without actually having been disproven’’. This passing of ideas into subjectivity is what he terms esoteric, and how the conceptual content featured on the album should be seen.

Now, this hiddenness, or esoteric aspect, as it relates to the theoretical concept of Antediluvian, presents to us the great dilemma of institutionalized academic authority. Whilst some claim that evidence suggestive of the existence of an ancient civilization that exercised global influence and whose collapse is preserved in written sources, and correlations found in archaeological sites and geology, others brush it off as being simply a fable, all references being symbolic. I won’t get into fine details, but what is ironic is that those who entertain such possibilities are deemed mystics, charlatans, or fools when some ‘’authorities’’ would have us believe that structures across the world such as pyramids, universal symbols like the serpent, elaborate mythologies, and rituals – with all their steps and processes – as having sprung up in places far removed –even by vast oceans– have no interconnection other than human nature. Don’t get me wrong, there is a lot of deceit and fabrication out there concerning the subject too; but does not this academic myth sound more ‘mystical’ than to consider the possibility that there existed a common denominator civilization of which many others speak, even as linguists have posited the existence of a proto-Indo European language to explain the connections between Sanskrit, Greek, Latin, and so forth?

These are some of the topics and questions that interest me, and which you will find incorporated in Antediluvian.

4. What is the meaning and inspiration behind the name 'Ophion'?

Ophion is Greek for serpent. The inspiration behind the name comes from a book I had been reading some time ago called Ophiolatreia, or in other words, the study of serpent worship. Basically, Ophiolatreia is about the universality of the symbol and tells of how it entered into the culture and religion of nearly all peoples and nations. It further elaborates on some of its intended meanings, as well as corrupted conceptions of it. The author of this particular work is unknown, but the Phoenician Sanconiathon is said to have published a work treating the subject, on which Pherecydes Tyrus is believed to have been inspired for his treatise called Theology of Ophion (Ophiolatreia, p.5). It is in allusion to this last one that the final track of the album is entitled Theology, which is arguably the darkest, atmospherically, but doubtless the most esoteric, conceptually.


5. Can you tell us a little bit more about the artwork that is presented on the album cover?

As you know, this marvelous artwork was done by the great Khaos Diktator. My intention for the cover was for it to capture the essence of the album, the heartland from where, I argue, the symbol of the serpent originally came. So when he and I spoke, I basically summarized the album, song by song, in order for him to have a clear idea, which he quite fortunately sympathized with. In fact, nothing will summarize it better than the words of Khaos Diktator himself,  ‘ a long-forgotten world’. Now, retain that thought.


6. The band members reside in both Spain and the Dominican Republic, how does this work out in the recording process?

The recording process went about like this: Focalor recorded the guitars and bass in his studio in the Dominican Republic and digitally sent them to S. at The Empty Hall Studio in Madrid, where they were reamped, mixed, and mastered. Since I (Monarch) am here in Madrid, I went to The Empty Hall Studio to record the vocals. We believe the process demonstrates that nowadays bands can perfectly operate remotely during the recording process.

7. Is the band open to the idea of doing live shows?

Definitely. Once the world re-opens, we’ll consider the offers that come our way.

8. The album was released on 'Nefast Films Records', can you tell us a little bit more about this label?

Nefast Films Records is a small label for extreme metal bands run by Focalor in the Dominican Republic. Its prime objective is to help local bands by offering affordable visual (e.g. videos) and recording services. Given that Focalor recorded guitars and bass at Nefast Films Records studio before sending them to The Empty Hall in Madrid for reamping, and so on, and we did not have a label for this album, we decided to publish Antediluvian under the label’s name. In essence, the use of Nefast Films Records is both a tribute and message to all the local bands stating that it's possible to get your name out there. Hard work and attention to detail goes a long way. It’s easy to lose sight of that when you are playing on a small island in the Caribbean. So, the truth of the matter is that Ophion is currently independent and open to collaborating with a label that could make the most of what we have to offer. Antediluvian is only the beginning.

9. On a worldwide level, how has the reaction been to your music by fans of black and death metal?

We were confident that we had created something that was both unique and interesting – it's not a copy of this or that band’s playing style, and all the songs are distinguishable from the other whilst having a recognizable musical line. But, to answer the question, the reaction has been great, and unexpected! Following the release of Antediluvian, we have been able to personally connect with people from all over Europe, the USA, Latin America, and even Australia. And of course, the Dominican Republic! For instance, we were recently featured in the German YouTube channel Heavy Harlequin and Argentina based Headbangers.es and seeing some of the stats provided by music platforms like Spotify and Bandcamp, we have started to get attention from Poland (the cradle of blackened death metal!), Russia and, surprisingly, Japan and Taiwan!

10. What is going on with the other bands that the guitar player is a part of?

Focalor is my solo project and just last year (2019) I released the full-length ‘Uroboros’. You could check out the Focalor YouTube channel for some videos. As regards the other bands, Ad Bestia was dissolved in 2012, and Soul of Death is currently inactive. Both of these were successful bands locally, each with its own following, and fortunately enough, Ophion now counts on the support of many of those old followers, in addition to the numerous new ones.

11. Musically speaking, where do you see the band heading into during the future?

Our vision for the future is to produce albums that are bigger and better than the one before. In doing so, we will have established a distinct and recognizable sound in the international scene. Some of the positive feedback we have got has to do with the balance of black and death Antediluvian achieved. So, that particular balance in combination with the atmosphere is something that we intend to perfect. Indeed, we have already started to work on this since we started experimenting for the next album. What is more is that for the next production we will count on the participation of Wolv on guitars too, who will add some of the imposing and chaotic elements that his riffing is characteristic of.

12. What are some of the bands or musical styles that have had an influence on your music and also what are you listening to nowadays?

13. Before we wrap up this interview, do you have any final words or thoughts?

First of all, we would like to thank Blackened Death Metal Zine for showing interest in the band, as well as everyone who has been supporting us in the Dominican Republic, Spain, Germany, Russia, the USA, Australia, and all around the world. We hope this interview sheds some light on Ophion’s music and concept so that you could feel closer to the band. Anyone out there who wants to connect, feel free to write to us. And mark these words, Ophion is an up and coming band that you will be hearing more from in the future.