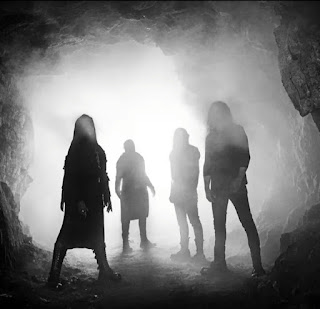 ANZV emerged at the end of 2019, after being off for a good few years from songwriting. I started composing as I had some ideas, which were initially kept for personal consumption.

Initially I thought about taking on these themes for another project that I had, but that at the moment had no live expression. But ANZV grew in a very different way and required some visual component different from what it had already done.

The sound required another type of environment and atmosphere and the concept itself began to take on a much darker dimension. And as soon as the initial body appeared, it was necessary to add the members to complete the whole. It was time for ANZV to ascend!

2.Recently you have released your first album can you tell us a little bit more about the musical style that you went for on the recording?

There's nothing previously established. ANZV fuses the northern winds with the Mesopotamian universe showing a Death Black Metal sound that wanders between classic and some post-black metal. Things just came out naturally as well the oriental vibes that have influenced my path over the years.

They are all about a journey through this nihilist void, defying any believes or values printed in the subconscious realm of our mind.

4.What is the meaning and inspiration behind the name 'Anzv'?

ANZV (refers to Sumerian Anzû) is a mythological wild creature of the mountains. Part-lion-and-eagle demonic creature born from the primordial waters of Apsu, a personification of unexplainable elements of nature like thunderstorms and strong winds.

We thought it would be auspicious to be under those wings.

It represents the rising of ANZV, in a ritualistic invocation of the self.

Till now we played two shows regarding the presentation of the album “Gallas”. Both were incredibly intense, powerful and covered in a very obscure aura. Press described them as “a ritual made of incense, blood, and other distant scents.”

We have already a couple of non-confirmed dates. In the right time we will announce them.

8.The new album was released on 'Exorcize Music', can you tell us a little bit more about this label?

It’s an old label which has released a few albums from well-known Portuguese bands in the past and now it’s rising once again, marking their return with the release of our album “Gallas”.

I knew I had a great album in hands and had worked hard to get things where they are now, so I’m very thankful that all that effort is being paid off largely!

We are always working with our feet on the ground, aware of what is happening now trying our best to reach our goals. Which goals? Well, we don’t know exactly...we are enjoying the journey, free to know where it takes us.

11.What are some of the bands are musical styles that have had an influence on your music and also what are you listening to nowadays?

There are hundreds of bands that came across our paths during more than 30 years involved in the metal scene which probably influenced us creatively.

Those bands can go from Alternative Rock into the rawest Black Metal. It would be reductive to name just a few bands.

Even when I’m thinking about what I have been listening lately, it’s not accurate, since I’m always jumping between styles and new or old releases. To give you an example, right now on my LP player it is “La Morsure du Christ” from Seth. On my Cd player is “The Karelian Isthmus” from Amorphis and on my car “Apocalypticists” from Kriegsmaschine.

An immense part of it…

Thank you for your interest in our work. Hope to see you around in one of our rituals.

Posted by OccultBlackMetal at 2:35 PM