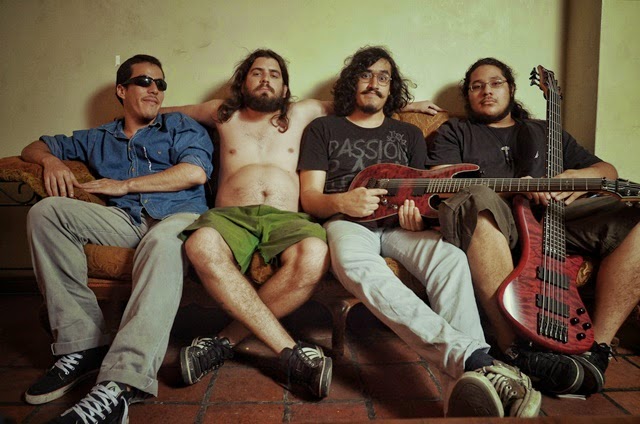 We are la bicicleta del Diablo (the devil`s bicycle) and we are from Guayaquil, Ecuador, it all started around 2008 at the university, when one  day damian arias (guitar player) came to (pucho flores, vocalist) and ask him if he was interested in making a band, his answer was literally ‘hell yeah’ , damian gave me ‘pucho’one track with some guitar riffs, so ‘’pucho’ began to put some lyrics to that shit and suddenly we had something that we can play. After that we had to many fucking  people in and out the band,until we finally meet Daniel Torres “don dod” (bass player) on 2010 who was also a student from the university(it  was his very first year at the campus around that time) were damian and pucho also attended. As with every possible candidate for the band, we ask him if he want to join in, and he said yes .  Our biggest problem was always the drummer because here in Guayaquil we don´t have too many  options to find the right drummer, but ‘pucho’ knew someone a long time ago from the metal scene  that would fit perfectly to our style and that was mota alvear (drummer). Together the 4 of us began this metal journey of becoming A METAL BAND IN ECUADOR


In December you have released in ep, can you tell us a little bit more about your musical sound?

Yeah that’s right we released our first ep called “Entrañas negras” (black guts), about the sound if we have to put ourselves into one category, it will be metal only metal, we describe this album like some hybrid kind of metal because we were trying to explore different genres of metal such as death metal, deathcore, groove, metalcore, trash, black and even nu metal, with piss off and high pitch screams and gutturals. But we definitely like to play brutal and aggressive

What are some of the lyrical topics and subjects the band explores with the music?

About the lyrics, at the beginning we came out with the idea of creating horros stories monster inspired  songs like the song V de psicopata ( V PSYCO) that is about a demon vampire that is obsessed with raping and murdered people, but in the other hand we also had topics that links the use of drugs and the deepest dark side of ourselves, like entrañas negras (black guts), which is about how the crack abuse links you with pure hell in your thoughts, also the song monomania which is about how the worlds end and fall into a maze of insanity.


What is the meaning and inspiration behind the name 'La Bicicleta del Diablo?

After a rehearsal we started to throw different names for the band, until ‘don dod’(bass player) became with the idea of some kind of demon riding a bicycle and in Spanish it sounded so bad ass ,so we became LA BICICLETA DEL DIABLO


What are some of the best shows that the band has played so far and also how would you describe your stage performance?

we remember 3  great shows one was the ‘Huankavilca raimy’ in 2012, and also ‘la semana del rock’(ROCK WEEK) in 2011,both in Guayaquil our hometown.
Both shows were insane, people went crazy and was kind of cool because at the time we were so ‘newbies’ at the metal scene. Another show that we played fucking great, was for the 10 years of DESCOMUNAL (local band). we try to give it all in our stage performance and we definitely loose our minds when we are playing live and we always trying to make that connection with each head mother fucker banger


Do you have any touring or show plans for the future?

At this moment we don` t have any plans on touring or even a live performance, we are so focus in writing new material for the next album, in fact if everything went right we will have a new cd for the end of this year or the beginning of the next.

Currently you are unsigned, are you looking for a label or have received any interest?

Yeah like every band that is our biggest dream to get signed so we can live and pay debts thanks to metal music, but we all realize that dream is so damn difficult and even more if we live on a third world country such as Ecuador, but still we hope that with the new album we can reach that fucking desire and make this shit happen, so no, we don`t had receive any deal yet.


How would you describe the metal scene in your home country of Ecuador?

Here in Guayaquil our home city the situation is very poor the people preferred other kind of music like salsa, regeton, and romantics shits, so we can say that here we are fucked, but in quito (Ecuador capital) the situation is very different, the metal scene is very big and even all the monsters of metal that were visit our land like metallica, lamb of god and korn had played is in quito so our plan is as soon we had the new album we are going to move to quito to promote the new album a few months.

On a worldwide level how has the feedback been to your music by fans of extreme metal?

We are not  aware of that situation how the people of other countries react with us, but if we are having this interview that is definitely  a good sign.

When can we expect a full length album and also where do you see the band heading into musically during the future?

Like i said before we hope that we can complete the goal of recording this album for the end of this year or the beginning of the next. But we are so excited with this process because the band definitely had evolved into a evil and darker sound we are playing in a lower tune and also we feel that our music is getting more mature so we are hoping to produce the best fucking extreme metal album in Ecuador.


11. What are some of the bands or musical styles that have had an influence on your music and also what are you listening to nowadays?

UFF to many influences to tell, but naming a few bunch of them, they’ll be meshuggah, lamb of god, Cannibal corpse, metallica, korn, pantera, megadeth, the black dahlia murder, sepultura, obituary, death, whitechapel, slip0knot and more.


12. What are some of your non musical interests?

13. Before we wrap up this interview, do you have any final words or thoughts?
Just To wait and prepare to how the new album of LA BICICLETA DEL DIABLO is going to blow your fucking heads off

Posted by OccultBlackMetal at 7:44 PM