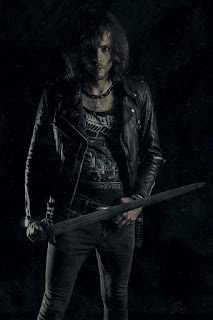 The final recordings of the album began in December 2018 and ended in May 2019 – a relatively long time period. In the meantime the preparations for upcoming live concerts are in its planning and creation.

2.Recently you have released a new album, musically how does it differ from your previous demo, single and ep?

The "cornerstone" of all releases has always remained the same. I wouldn't say that the past releases are very different to each other. But there has been a constant development from one record to another. The final result is my debut album "Beyond The Realm" now. Compared to the previous releases, the traditional, classic Heavy Metal content can be noticed in a stronger way than it was before. This results to a very dynamic way of playing and the album "breathes" through a lot of melodies.

3.This is also your first release since 2015, can you tell us a little bit more about what has been going on during  that time span?

The songwriting for "Beyond The Realm" began shortly after the release of the "Infernal Power" 7" single, which was released in November 2015. Since the beginning it was clear for me that there will be a very big concept behind this record, that’s why it took so long to create everything. All ideas that had been in my head over the years and were arranged to the very last note to achieve exactly the result I set for myself.

"Beyond The Realm" symbolizes the never-ending fight between good and evil which lasts forever, even after death. A few songs are closely structured into each other and can be read as story, although I don't see the album as a pure concept album. In this case the content of some songs stands too much for themselves.

With the new songs and lyrics, the listener gets the chance to decide his concept and his sight of view. I think that’s what differs the most from the past releases

5.You have also covered some satanic and occult topics on some of your recordings, can you tell us a little bit more about your interest in these topics?

To get in details of this topic would take hours and hours. You can find a relation to this also in “Beyond The Realm”, if you read the lyrics and get deeper into this issue.

6.What is the meaning and inspiration behind the name 'Diabolic Night'?

The night had always a huge impact on our lives and everything around. It swallows the light, every shadow is absorbed and returns as one - the only thing that remains is total darkness. This is what the concept of "Diabolic Night" is about.

I deliberately chose the same artist (Adam Burke) who already painted the "Infernal Power" artwork back then. He is able to realize my idea exactly as I had it in my mind. It represents exactly the concept behind this record, as I answered already, the never ending fight between good and evil.

8.On the albums the band works as a duo but has a different line up for live shows, are you open to expanding into a full band in the studio?

Diabolic is still a one man project, where I am responsible for the complete songwriting and every instrument (except the drums, which were played by “Christhunter”) The concept behind Diabolic Night doesn't fit to the typical band structure where everyone brings in their ideas. It wouldn't be the same in the end. With Diabolic Night I enjoy the freedom to express my own vision exactly as I feel it. In a full time band, it's usually the case that everyone wants to contribute their ideas in some way, which is completely justified, but not for Diabolic Night. Anyway there is a live line-up created, ready to perform the songs live (again). The live events will begin next year.

9.What are some of the best shows that the band has played so far and also how would you describe your stage performance?

It’s the one and only real gig Diabolic Night played so far - Raging Death Date 2015.
Live activities weren’t made since then, I was fully concentrated on my record afterwards.

10.Do you have any touring or show plans for the new album?

Live activities are planned, everything will be updated very soon.

11.The new album was released on 'High Roller Records', can you tell us a little bit more about this label?

I couldn't have found a better collaboration than with High Roller Records. In the past I released my discography by my own label "Mortal Rite Records", where I was able to gain a lot of experience. Due to the growth of Diabolic Night, it's no longer possible for me to distribute this as a one-man label, so I'm happy to have High Roller on my side. The promotion and advertising are going absolutely well and since the official announcement that I signed the contract, lots of people became aware of Diabolic Night for the first time.

12.On a worldwide level how has the reaction been to your music by fans of black, thrash and speed metal?

The reaction to this goes pretty well. I don’t limit myself to specific genres and don’t care for stereotyped thinking of playing only kind of genre. Of course it’s clear that the “cornerstone” of Diabolic Night has its musically structure deep in European Metal (Especially from Germany and Scandinavia) like it was done 30-35 years ago. I let flow everything into my music that has always inspired me – besides of extremely speed structures, it’s also a melody that sticks in your head.

The musical concept will always remain the same way as it was since the beginning.

It's almost impossible to relate to a particular band as an influence. The songs I write reflect exactly the music I listen to since my earliest youth. I think the biggest influence for everything is the traditional Heavy Metal which is responsible that Diabolic Night sounds the way it’s like. For more than 15 years now the same albums ended up on my turntable. If you still get the same emotions as when you listen to these records for the first time, I think it has an enormous influence on the music you write by yourself. You automatically get back to the same kind of music – you build up your own world and sink into it.

15.What are some of your non musical interests?

I like to explore historic buildings and do sightseeing of places which have a huge impact on me.

16.Before we wrap up this interview, do you have any final words or thoughts?

Thanks for the interview, beware of some news soon. 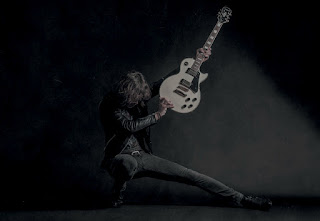 Posted by OccultBlackMetal at 2:05 AM