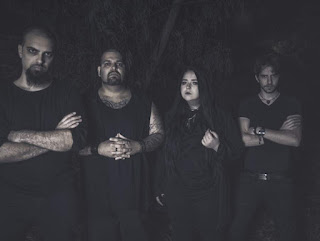 We are a Dark/Doom metal band from Israel. Thank you for this interview!

2.Recently you have released your first full length, musically how does it differ from your previous demo?

The album is a direct evolution from the demo, with more influences of black metal and generally darker atmosphere and better production.

3.The band has been around since 2009 but so far has only released a demo and a full length, can you tell us a little bit more about the gaps in between releases?

Edellom was originally a solo project, only around 2013 it became an active band. This also has to do with the compulsory service in the IDF, it slows down every other aspect in your life. Many high-school metal bands split-up shortly after the band members join the IDF, it's very hard to maintain an active band during this period.

We draw inspiration from folk tales, myths and gothic literature. Sirens contains two different stories, one of them was written by Maria (singer) and the other by David (singer, guitars). Even though these stories are not connected, we found out they deal with relatively close themes, hence the title "sirens" and the artwork that represents both.

5.What is the meaning and inspiration behind the name 'Edellom'?

There's no meaning, David just liked the way it sounds.

As mentioned previously, the artwork demonstrates some of the elements of both stories. On the front cover you can see the way we imagined the Black Sorceress, the antagonist in David's story, and on the back is the serial killer from Maria's story. We wanted to visually "connect" them by making the killer hiding in the woods while looking at the sorceress, but again, these stories are separated.

7.The band started out as a solo project, what was the decision behind expanding into a full line up?

David didn't know anyone who loves the genre and so he decided to do everything by himself. The original idea was to form a band but that didn't seem realistic at the time. Social networks didn't really exist at this point (not as intensely as today) and it was very hard to get to know other people with similar music preferences. A few years later, when a possibility of a first lineup was created, Edellom turned into an active band.

The best gig we had was most certainly the album's release show, we created a special atmosphere with tons of decorations and DIY items, like small shrines, branches, leaves, skulls and much more. The show itself was intense and the crowd's reactions were amazing.

9.Do you have any touring or show plans for the new album?

Nothing concrete yet.
10.On a worldwide level how has the reaction been to your music by fans of black, dark, doom and gothic metal?

Reactions are great, we got some very positive reviews and we cannot wait to sit down and make some new materials.

Currently all our band members focus on Edellom, the other projects and bands are unfortunately not active.

It's really hard to say, probably we will continue the general theme of dark, atmospheric and heavy music, with some developments and various influences.

Some influences may be Behemoth, Swallow the Sun, Trees of Eternity, Mgła, Burzum, Paradise Lost, Draconian. It's hard to say exactly what we listen to today, we keep discovering amazing new bands thanks to Spotify and YouTube every day.

14.What are some of your non musical interests?

15.Before we wrap up this interview, do you have any final words or thoughts?
First of all, thank you so much for the interview, again. We cannot wait to execute some of our plans for the future, and we hope people connect to our music and the emotions we share. Hope to see you all some say!

Posted by OccultBlackMetal at 1:45 AM