1,Can you give us an update on what has been going on with the band since the recording and release of the new album?
-Since that time (last week) not so much, we had some concert in promotion of the album and we are looking forward for the next year show!

2.Recently you have released a new album, musically how does it differ from the stuff you have released in the past?
- In one word: “EXTREME” we are always on the research of a always more extreme and uncompromisingly sound, Our first album was clearly a classic death doom influenced, now our path in to the darkness is just began.

3.Some of your lyrics cover occultism themes, can you tell us a little bit more about your interest in this subject?
Yes, occultism but more archeoastronomy and old Sumerian mythos and pre-deluvian.

4.What are some of the other lyrical topics and subjects the band has explored over the years with the music?
In all our release until now the main subject was always fast the same, archeoastronomy , occultism and ANNUNAKI (eheh)

5.What is the meaning and inspiration behind the name 'Into Coffin'?
I think Into Coffin are a perfect words for describe our music… like be close in a fucking coffin and wait to die but after a really long and slow agony and panic attack… and join the spiritual  darkest abyss

6.Can you tell us a little bit more about the artwork that is presented on the album cover?
Of course, the cover is a idea from G. And is just a representation of our lyrics in the album. We love that cover was a great work from Daniel Hermosilla (Not Fragor art). This is our 3rd work in his alliance, he can really represent our music.

7.What are some of the best shows that the band has played over the years and also how would you describe your stage performance?
Our show are pretty foggy we like to great a really dark show, like be in the middle of an abyss. We love play live, live performance is where our music can complete be revelated. We had many good show, with many other bands, hard to say how was the best.

8.Do you have any touring or show plans for the new album?
We have already do 3 show for this new album and now we are looking for next year to get some good show where we can play this new album in his entirety

9.Earlier this year you where also a part of a couple of splits with 'Cenotafio' and 'Devoid Of Thought', what are your thoughts on the other bands that had participated on the recordings?
Cenotafio is a great Black/Death band from Chile, absolutely one of the best and we really like their other music! We hope to can play together in the future.
Devoid of Thought are friends of us from many years, we have already play many show together in this last 2 years. A split with the was a naturally evolution of our friendship. They had just 2 demo released until now but they are fucking crushing cosmic death metal and beast on live performance, we will for sure more show together.

10.On a worldwide level how has the reaction been to your music by fans of black, doom and death metal?
Until now pretty good, in the future we will see…

11.What is going on with some of the other bands or musical projects these days that some of the band members are a part of?
Everybody of us is already dedicated to other music project the most always in the Black/Death/Doom area. I Think next year will coming-out  some release from each side-project. we can say more.

12.Where do you see the band heading into musically during the future?
We have many project of course we will release more material and always try to be one step more in the center of total darkness sound.

13.What are some of the bands or musical styles that have had an influence on your music and also what are you listening to nowadays?
A lot of influences, but of course the main are band like: Grave Miasma, Vassafor, Spectral Voice, Temple Nightside, the all Australia and New Zealand is full of really great bands!

14.Before we wrap up this interview, do you have any final words or thoughts?
Not so much, just thanks for your time and see you where the fog is! 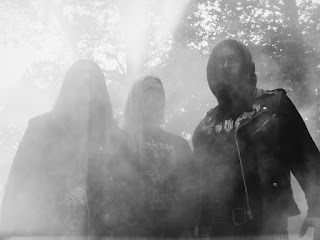 Posted by OccultBlackMetal at 11:09 PM