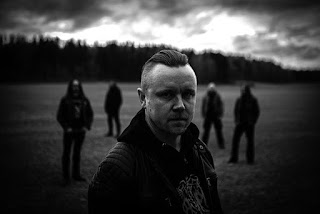 ”Counting Hours came in form about 5 years ago in 2015. There were couple of songs already from Rapture’s Futile- era (’99-’01) which i have had kept hidden until ’15. Started thinking that as this style of music is close to me, why i wouldnt keep doing this instead writing stuff to keep em hid.

Later on after demoing few songs with our singer Ilpo, we thought to get couple of players more to make this work better on live shows and also song writing and arranging wise. Easy choice were to ask Tomi (Rapture, Shape of despair etc) along as we’ve played together since ages. Markus and Sameli came along pretty fast since both are friends of ours and share the same interests in this kind of music.”

2.You have your first full length coming out in October, musically how does it differ from your previous demo?

”It differs in few ways. We had a producer, Jussi Hämäläinen (Hanging garden, The chant etc) on this album and we pretty much arranged everything from the beginning with Jussi. But for song writing and arranging wise, songs have more variety compared to demo material. But still, we tried to keep the atmosphere close to each other.”

3.This is also your first release in 2016, can you tell us a little bit more about what has been going on during that time frame?

”Well, after our self-released demo cd we had a chance to get The vinyl division along to release it on a vinyl as well. Along with those, we had some shows with CH but more with the other bands. We did rehearse now and then and worked on the new material before entering the studio in 2019.”

”Lyrics pretty much deals around lived life & mistakes, which has to be taken cared of. Death as an salvation or relief is an solution of one sort here.”

5.What is the meaning and inspiration behind he name 'Counting Hours'?

”Shortly, counting down about leaving life.”

”We had a couple of different versions as an cover art to The Will but, this specifically bleak one were the one which resembles the lyrical theme the most. K.Pyyhtinen did good work on this.”

”Well, we have played only a couple of shows so far but had a chance to appear over at Brutal Assault in 2019. Biggest show to us for now but wouldnt say it for the best cause of that. We need definitely an smaller venue to have the atmosphere in place..”

8.On a worldwide level how has the reaction been to your music by fans of metal and depressive rock?

”So far suprisingly good, didnt had any expectations and still dont have. I let the music speak for itself and of course it’s always great if people have some interest towards it.”

”Tomi with Impaled Nazarene has made new album recently, still mixing it i guess.. waiting that anxiously.Sameli has released new album with Cynabare Urne recently. Not sure about what’s happening with The Chant where’s Ilpo and Markus also.. hope they will release something new soon.

Shape of despair is active and will share some news later on.”

”Have already done new music and can say it’s even darker along with our same style.. Will try to keep our music more open with more variety, so therefore will try to avoid being at the same category all the time. But who knows, creating music is interesting thing as your mindflow works the way it works..”

”Theres so much of music around from where you’ll draw inspiration of and of course music aint the only source. But i’m sure people could tell our music is familiar with some of the Swedish acts but also familar song writing as in Rapture were.

Nowadays i’m listening pretty much the same as in the early days. Enjoyed recently alot to depressive suicidal black metal.”

”The Vinyl Division is having our album out this month’s 23rd day. People can support by paying attention to it’s catalogue and of course by following us as well. Thanks for this interview.”

Posted by OccultBlackMetal at 11:45 AM