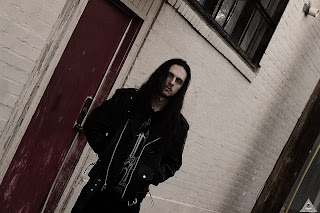 King Ov Wyrms is a project that I’ve been up keeping for a few years now, as I’ve done my time working in Pain Patterns, (ex) Judicator, and some other TBA projects. It’s my outlet of just purely aggressive metal. At times in all of the projects I’ve worked on I’ve hit some point where my original initial direction got set off track ever so slightly, sometimes I’ve intended Pain Patterns songs to be more aggressive but they ended up something different for example. King Ov Wyrms is basically that outlet for me to just focus on that one direction of pure aggression.

2.You have your first full length coming out in November, can you tell us a little bit more about the musical styles you went for on the recording?

It originally grew from my love of early death metal acts like Morbid Angel, Death, Cannibal Corpse, Bloodbath, etc. And how I loved that style of music. Today’s approach towards death metal is totally different in almost every aspect I’d say, its still great but different in stylistic touches. I wanted to take that great sonic approach that modern death metal has and attempt to bring back some of that older songwriting touches that we had on those earlier death metal records which is basically where I came up with the sound, writing direction, and production of Lord Ov Thornes.

3.A lot of your lyrics cover occultism themes, can you tell us a little bit more about your interest in the dark arts?

I’ve always been deeply fascinated with the occult, Satanism, Magick, Wiccan, Pagan beliefs, and really all the differences of religion and spirituality. I feel personally more at peace with my pagan beliefs and spirituality but I did spend my time exploring a lot while I was growing up. I use my understanding of the occult in my own personal motives, I take peace in trying to understand the world around me through the correlations of the elements, I use my understanding of magick to help me place myself mentally, invoking certain mental states through rituals and practice has helped me before with guidance to which I could never achieve in the religious upbringing of Catholicism.

4.What are some of the other lyrical topics and subjects you have explored so far with the music?

With the extremes of the genre I had to pull out material based in the extremes as well. War is a common topic because its just purely violent and even words on the subject immediately paint a visually gruesome image in your mind so its an easy topic for a lot of musicians in the extreme metal genres to conjure up material from. I’m personally a big fan of literature, I grew up reading a lot of books and came across The Inferno at a fairly young age which opened up that door for me to delve into demonology and explore lyrical themes based on that ilk. More from the stems of literature are the songs The Great Sleeper and Ascendance, those are blatantly inspired by Lovecraft. I'm a big Lovecraft fan, the idea of cosmic horror is something I feel I can never get enough of and it truly amazes me how much people have added onto the concepts he presented making the subject this ever growing torrent of mysterious horror.

5.What is the meaning and inspiration behind the name 'King Ov Worms'?

King Ov Wyrms is actually a name brought forth to the project by Reymundo Romero, he was the original bassist and co founder of Pain Patterns. He was a huge part of a lot of my early projects and more or less help set up both of King and Pain. He knew the significance of what I wanted to state with the religious subjects in some of the songs I already wrote and presented King Of Worms from the mocking title given to Jesus Christ “a king of nothing".

The artwork for Lord Ov Thornes was done by my dear friend Thomas Carlson. He is this fantastic visionary artist who I’d say has a very unique talent for fantasy. I originally pitched the idea of having just a throne with thorns covering it or a throne with a crown of thorns. He took that very brief description and went overboard with it creating this massive dark ambient environment with (on the full wrap) the dark shadow figure watching the throne in a mist. He gave it this amazingly dark yet in my opinion unique fantasy aspect that really helped set the imagery for the album for myself. He also supplied the logo for King as well so I’d like to say he is going to be a key person for Kings imagery for future work as well.

7.With this project you record everything by yourself but have experience working with other musicians, which one do you prefer?

As a person I purely love to create. I enjoy the endless work flow of being able to write my own songs and take it to the production stage, essentially follow it through to the end. It would be easy to say it’s equally as rewarding working on another musicians music because at the end of the day I get to help someone put together their work of art.

I would be interested in taking King that much further with a label should the opportunity arise. I only got an extremely brief opportunity to work under Prosthetic Records with Judicator before we split paths so I can't realistically say I got to see that much of the change. I have yet to make much connection to record labels with either of my projects Pain Patterns or King Ov Wyrms but it is within my interest to move forward with that process when the time comes.

From what I’ve seen its all been positive, I honestly thought I’d be getting some push back from people who possibly would draw the line with a part of my career being in Power Metal however it hindered nothing. I have gotten some very kind feedback on the music making “a seamless blend of both black and death metal" which I really enjoyed hearing. There’s also been some very positive reactions towards the production aspect so I’d say on all ends I’m proud of all the feedback.

10.What is going on with your other band 'Pain Patterns' these days?

Pain Patterns is an ever developing project, we have been trying to do what we can while still practicing social distancing but we have been very hard at work with our follow up to The Dawn Collective. I can’t say anything truthfully on a release date at this time but we are about six songs in with another three or four being worked out, of course I’ll be doing the production again so as soon as we finish the writing process we will be making that straight transition into the production. Hopefully in the near future we will be teasing a single off of this release which has been heavily discussed so keep an eye out for that coming soon.

11.Where do you see yourself heading into as a musician during the future?

I honestly don’t like to look too far ahead in that respect therefore I don’t have much of an idea on it. I realistically like to take my days little by little, right now I’m only trying to focus on King and the release of Lord Ov Thornes and I want to take that wherever it’ll go. After the release I’m going to make sure I give my time back to Pain Patterns and finish our follow up to The Dawn Collective. I have another “symphonic" metal project which I’ve been teasing on my social media accounts which hopefully will be better grounded this next year but that’s my realistic scope of things. It sounds like a lot but to me this is just the next year of work, as long as I can keep creating content I’m content.

I grew up being very influenced by my fathers music choice, he showed me a lot of classic rock growing up like Creedence Clearwater Revival, Pink Floyd, The Eagles, Deep Purple, etc. so that definitely opened up the door to Iron Maiden and Judas Priest for me. When I got into school I started diving more into jazz and classical music as it accompanied my studies and it also was the next challenge for me in comprehension, I figured now that I understood metal music and rock it would be nice to push myself into something unknown. Since my current rotation I’ve been unable to put down my favorite artists Opeth and Ihsahn, Hail Spirit Noir, Panzerfaust and Incandescence have been taking up a lot of my time as well.

Just to whoever takes the time to listen to any of my music I truly appreciate it, the response and feedback I’ve received already for Threnody has been phenomenal and I’m excited to release the rest of the album for everyone.

Posted by OccultBlackMetal at 3:02 PM