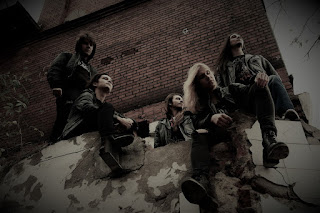 Eryk: Each of us has a story to tell but nobody cares about assholes, so we bring our minds to play some dirty music and share our thoughts. Not a lot of people know about Polish underground heavy metal scene, we are definitely one of most fucked up people down here.

2.You have a new album coming out in November, can you tell us a little bit more about the musical style you went for on the recording?

Eryk: We had a lot of inspirations. Into our music we put a lot of dark vibes from the bands like Venom, Hellhammer and others. You can also hear some glam and doom metal influences or even a bit of Japanese heavy metal. Vocals are definitly rooted in underground black and thrash metal. We describe our style as new wave of oldschool black metal.

3.A lot of your lyrics cover occult themes, can you tell us a little bit more about your interest in this subject?

Eryk: The majority of lyrics are based on anti-religious content, terrifying stories from our country and our emotions. The root of it goes deep down inside of us. One of my first songs was created in 2016, when I was home alone on the Christmas Eve, because of religious differences in my family. The song I wrote back was created from scratch on that night, I was writing it in tears and with blood flowing from my hands. I named it „Black Magic”. Maybe all the religious crap was the source of these feelings, who knows?

4.What is the meaning and inspiration behind the name 'Okrutnik'?

Eryk: There is a nice, dark story behind this name. In 1991 there was a series of interviews with the Pope John Paul II in Polish TV, he was surrounded with kids and answered their questions. One of them asked him about his worries, so he answered, that he is afraid of Okrutnik (in Polish it means a cruel man, tormentor) – we think he meant the devil.

Eryk: It's a great artwork made by our highschool friend, Sandra Kubacka. She has been doing stuff for us for a long time, so it has become an inseparable part of our music. The cover art shows an image of antichrist and his legion. We are the legion, the metalheads, that's all about it.  Sandra also made the rest of the great, dark, obscene drawings that you can find inside the CD booklet.

Grzegorz: We definitely remember the worst one. Michał had a sore throat and fever. We were in the middle of the tour so we figured out that Eryk would sing instead. He got drunk and at the start of the show he forgot the name of the city we were playing. The show was in Piła, he said „Welcome Gniezno”. Total destruction.

Michał: Our best gig was definitely in Gdańsk. We opened the event and we had very nice audience. The real Gdańsk Legion. It was this crazy feeling about it, as there were a bunch of people of our age who came to see us - not for the headliner, but mostly for Okrutnik. It's sick, we love it.

7.The new album is coming out on 'Ossuary Records', how did you get in contact with this label?

Eryk: The story started when we did a tour with legendary Turbo and there was a band called Hellhaim. We became good friends and played some cool dates together. In 2020 all the coronavirus pandemic started and we were locked down in our houses.  We recorded the album on our own and wanted to release it on our own. Funny thing is that the vocalist of Hellhaim, Mateusz Drzewicz (who is also the owner of Ossuary Records) was performing close to our place in September with his another band, Subterfuge. We dropped by to say hello and drink some beers. At one point we started talking about our album. Mateusz was asking more and more about it so we sent him the stuff. A few days later he decided to release our music and here we are.

8.On a worldwide level how has the reaction been to your music by fans of black and heavy metal

Szymon: We don't really know. There is not a huge amount of fans from abroad, since we were currently focused mostly on our home country. We are waiting for your reactions, people!

Eryk: All we wanna do is to play our stuff and have fun. It doesn't matter if it is a huge hall or small, odious club. As soon as the concert situation gets back to normal we’ll be back on the road to play these wicked shows. Meanwhile we are already working on a new record, so it’s gonna be around pretty soon.

Eryk: As a composer I can say that I went a long way with the classics like Megadeth and Metallica ever since I was an 8 years old kid. This is thanks to my mom, because she showed me all of it. Some time later I became shocked by Japanese speed metal. That's cool, obscure scene, everybody thinks about all the fuckin' „anime” bands, but there's also lots of great stuff underneath. I've started with Sex Machineguns and X Japan. Now I know mostly everything that’s worth listening to. As for 2017 I was much into 80s metal and some newer bands playing similarly: glam Britny Fox, sleazy Crashdiet,  also Enforcer, Testament, Annihilator. Their inspiration is priceless, all of it can be found on our record, somewhere.

Michał: I am mostly influenced by first wave of black metal. You know, Venom, Bathory, early Running Wild (everyone who doesn't think they're first wave BM can fuck off!) I started with Motorhead and the first albums of Iron Maiden, later there were Nifelheim, Treblinka and Midnight. The last one left a mark on my music perception. This is my musical background and I love these bands so much. I love heavy metal.

Szymon: My story starts with a TV series called Supernatural and its soundtrack with Deep Purple, AC/DC stuff. I started searching some local bands and I found the record „Kawaleria Szatana” by Turbo. I never would have thought that my band, someday, will share the stage with them, not to mention the whole nationwide tour – but it happened in 2019! Anyway, I was mostly local market listener, but then I found out about NWOBHM, and I became immersed in it. Nowadays I follow Polish black metal groups like Furia, Czort, Truchło Strzygi and some NWOTHM bands: Enforcer, Skull Fist, Cauldron etc.

Grzegorz: I'm musically open. I love Polish bands like Turbo, KAT (with original vocalist), Illusion. I grew up with Metallica and all the thrash bands from the 80s.

Eryk: Besides alcohol? I love all the wicked actions, sex, dirty things and cars. I study International Relations, that's an important one. Pray for my sins people.

Michał: Music is my life, but I also love history, reading books, broadening my horizons. It's pretty important, isn't it?

Szymon: Metal is the way of living and a great deal of things revolves around it. I work in a piano factory, so my life is full of music. I like to watch some good series or movie and of course hang out with people.

Grzegorz: I am an avid CD/LP/MC collector. But that’s still music, right? Let’s see, I am interested in all things related to transport – I even study it on the Univeristy of Technology. Oh, and I collect stamps and pictures with Pope.

Eryk: Walk on the wild side and check out our new record „Legion Antychrysta”. Thanks for the interview.