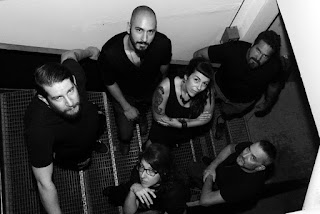 At first we are promoting our first album and our first book novel which is the continuation of the story of the first album. Thanks to our label Sliptrick Records that is doing a huge job to present our work in many places and we are focusing to explain in the better way the concept of the band : telling a deep an long story ! .

And then we work on our future stage performances, Les Enfants de DAGON has always been based on this triptych :  music, literature and show ! We want to transcribe the atmosphere of our live music in the most original way possible.

2.You have a new album coming out in October, can you tell us a little bit more about the musical style that you went for on the recording?

It’s not easy one ! We didn’t pick a music style in particular : the male voices often come from extreme metal (death and black style) but there also slower riff could be related to doom metal. Céline made some vocals close to opera and symphonic metal. We have some more melodic and sad riffs that can be compared to heavy-metal !

We have a lot of layers in our songs : drums, male / female vocals,  guitars, bass & keyboard ! It’s difficult balancing act between that will lead of the link of the music and the lyric.

Let’s says that the main genre is a kind of extreme metal.

3.The lyrics on the new album are a concept album, can you tell us a little bit more about the story you have covered with this release?

indeed our first album is a concept album with a story that we follow and discover over the songs. The writing process is based on a concept that should lead us to release 3 albums and write 2 books along a large narrative journey around Dagon.

In our first album, we follow the story of Pierre Duval, a former war chaplain who decides to leave France to take over the management of a small isolated parish in a port city, the city of INNSMOUTH... We will follow his interrogations on the folks of the port often afflicted with congenital defects, his questionings on his faith and his jostle in the madness as he discovers the truth of this place...

4.A lot of the lyrics and the band name is inspired by the writings of H.P Lovecraft, can you tell us a little bit more about your interest in his works?

it's an interest that dates back a very long time, our singer and lyricist Laurent discovered HPL as a teenager, he practiced role-playing games, we met at that time and I discovered the universe of the master of Providence during his games. When we started writing the project, it was obvious that the new "dagon" will be the base of our group, we took the name "les Enfants de Dagon" in respectful homage of his work, the short story of dagon was obvious because it seemed to us more accessible than other more abstruse stories of HPL, the "few" descriptions contained in the novel left us more narrative freedom and means of digressed. It opens up a universe with a lot of richness, places and characters. And the moist, dark and strange atmosphere of the port town of Innsmouth seemed to us ideal for our wish to transpose the atmosphere on stage.

On the album cover you have on the top our Band Name as a simple logo. Then, in the middle of the picture, you have this esoteric circle, which is the logo of the sect that is inside the city of Innsmouth !!!

We wanted something simple that could define us visually. Other illustrations are inside the booklet, but also on  our books and for the show thanks to the work of Matisse, a talented illustrator, who offered a drawing by song.

We haven't yet done a concert with Les enfants de Dagon yet, we are still working with our principle of Trytique music, literature and show. The Show is the third milestone of the band, we want to transcribe the atmosphere of Innsmouth as faithfully as possible and that costs money, we take things as we go, we have composed a concept album which we are releasing thanks to sliptrick records, we wrote a self-produced novel (in French) which is available on our bandcamp and finally the third step the show. We will work out our first ideas in December 2022 and develop over the finances, our scenes and our desires the visual universe of the group in concert.

7.Do you have any touring or show plans once the new album is released?

To be honest, we haven't really looked into it. The covid has slowed down the project, we have not been able in France to have access to rehearsal or concert halls for more than a year and a half, we have contacts with turners but we are 7 in the band, we will not be able to play everywhere ! it requires some logistics but we are on the subject and it should be released in 2023.

8.The new album is going to be released by 'Sliptrick Records', how did you get in contact with this label?

We made Preproduction for each songs , explained the project to the label , our triptych (music literature and show), they quickly hooked on our concept and our music and offered to distribute our album. Dagon helped us!!

So far the feedback is very good, the album hasn't been released yet, Sliptrick records has planned the date of October 4th! but the people who have had the opportunity to listen to our music have given us excellent feedback. We are not the most extreme in death or black but we wanted to create emotional and sad expressive music, the first listeners understood our desire and follow us, it is a real honor that they pay attention to us. There are so many bands, styles and creations, that we are happy to bring a bit of ourselves into this world. We can't wait to have the official release of the album and to be able to exchange it with those who want to follow « Les enfants de Dagon"

We are going to do a little teasing for our second album ;-) the action will take place 15-16 years after the end of the first novel and we are going to leave for New Orleans, one of the cradles of modern music, this will allow us to to satisfy our desire for brass, we will keep what makes the style of "les enfants de dagon", an emotional mix of black, death, doom, classical music and we will bring additional colors

11.What are some of the bands or musical styles the band members are currently listening to nowadays?

With 7 musicians it's varied, all the nuances of metal, classical and even French variety, we listen to what gives us emotion, some of us like our singer are the guardians of the temple, they listen mostly extreme metal which remains the backbone of our compositions but no one in the band stops at a single source of inspiration. if you want groups as inspiration, let’s say  Dimmu burgir, King diamond, paradise lost and Loudblast...personally the last album I listened to is Crescent "Carving the Fires of Akhet ».

Occult artifacts play an important role for us, the song haunted relic is about a powerful object, it's a mysterious and inspiring area that appeals to us as it attracts many, many metal fans. The widespread religions are ossified in their dogmas and can no longer bring anything uplifting to men. We all need this dark side in everything and occultism is one of the doors to a new knowledge, a new path. Everyone is free to take it, some will not, others are on the threshold and finally the last have taken the step. Everyone is free to join the Esoteric Order of Dagon !!!

First of all thank you for interviewing us, I hope your followers will have a better understanding of our music and the concept behind it. While waiting to meet maybe at one of our show, please support us on social networks, by buying our album available at sliptrick records from 04/10 and our novel on our bandcamp.

Posted by OccultBlackMetal at 8:51 PM