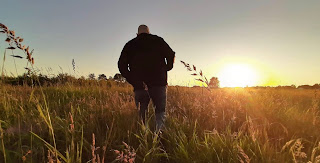 We have just completed our live line-up and are aiming to do a couple of gigs, to promote the band and the new album. We are also working on new material.

To be honest, the music isn’t that much different than our former work, at least musically. Maybe this time we have listened even  more to old school black metal. There are less death metal influences, but this isn’t done deliberately. We just wrote what came up in our sick minds.

3.The band was also broken up for more than 10 years, what was the cause of the split and also the decision to reform?

The Chösen started as a solo project. But going live, meant more musicians. We had a blast, but also a lot of changes in line up. So in the end the gigs went bad and new material wasn’t coming, so time to pull the plug. While waiting for new inspiration we were busy doing other bands and projects, before you kno wit more then ten years have past.

In the meantime, we had been writing more thrashy, stuff. The logical thing was to release as a new The Chösen album. Lyrics I write on a regular basis, so there was enough to fill the songs with.

4.A lot of your lyrics cover Paganism themes, can you tell us a little bit more about the main Pagan path that you have an interest in?

Always a great subject to write about, the pagan world is so extensive. It goes from magic to politics and from nature to war. I hold Dutch/Germanic paganism close to my heart.

From a very young age, I have been interested in history and in particular Dutch history. We are a small country, but we had a big impact on the history of the world. On one hand we were conquerors, but we were also the conquered.

6.What is the meaning and inspiration behind the name 'The Chosen'/

A couple of reasons: Those fallen in battle are chosen to either go to Valhalla or to Folkvangr. Another reason is to mess with modern religious people, all calling them the chosen people of their made up god. Now that name is also being used by us, heathen bastards. The Chösen also sounds like a cool gang name, as a scourge  in this dystopian society.

The snake represents chaos, the Yr-Rune represents death. Both are placed in a circle which represents glory. These are the main lyrical topics. The wooden swords are there to represent the pagan side of the band.

8.Currently there are only 2 members in the band, are you open to expanding the line up or do you prefer to remain a duo?

Well the live line up is going to consist of three members. We have just recruited WAR to join us in the drums and we are working on a live set. So to be continued.

9.When you have a live line up what where some of the best shows that you played and also how would you describe your stage performance?

Many years ago we did a mini tour with Aborym, Blacklodge and Corpus Christii, wich was super. We als played in Baroeg, Rotterdam also great. We opened A black metal festival in Leeuwarden which went terrible from our part, we hope to redeem that. Gigs in Germany are always great, so we hope to go there some more. We have some plans, but it stil lto early to reveal.

The stage performance will be more rock ’n roll I guess. Just three guys going at it as furious as possible.

The reactions, up to now, have been really positive. Very nice to come back to that. Of course we have to see what the reactions will be once we get on stage.

11.What is going on with some of the other bands or musical projects these days that the main member is a part of?

My other band is Standvast, together with Nortfalke. In this band I’m the vocalist. Dragontank playes bass with the dutch old school heavy metal band: Steel shock. Both of us are also busy with divers projects, a bit to many to mention. WAR has his own band, Gheestenland. He is and was also involved in many different projects.

In the future we hope to get an even better mix of thrash and black without becoming a parody of the genre.

Thanks you for this opportunity, all the best!!!

The contents of this email are confidential and intended only for the recipient indicated in the message. Please remember your environmental responsibility. Before you print this email message, ask yourself if you really need a hard copy.

https://www.facebook.com/Thechosen666
Posted by OccultBlackMetal at 5:10 PM