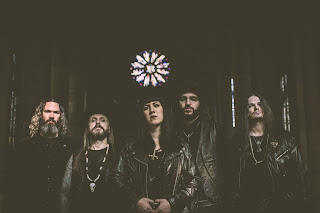 E: We’re five queens from Stuttgart in Southern Germany and play Blackened Doom Rock. A: We first got together in early 2016 to create something new.
K : Something that is challenging and without compromise

2.In May you have your first full length coming out, musically how does it differ from your previous demo?

A: I think it is more detailed and has more depth to it, compared to the songs that we released on our demo. It took us quite a while to figure out, what the idea behind our first album should be. Once we had a story to it, we kept writing and adding little pieces to the songs that would fit to the whole idea.
K: It also differs in the production. The demo was recorded 100% analogue to cassette,which in itself was a concept.For the LP we returned to the same studio with the same producer ( Ralv Milberg) but this time to take full advantage of the facilities that he has to offer.Thus taking the music to the next level.

3.Some of your lyrics cover ancient mythologies and philosophies, can you tell us a little bit more about your interest in these topics?

E : Since I was a child I was always  interested in mystical stories and existential questions (Okay as a child it’s more like “Why can’t i watch TV, mom? Explain yourself”). Also I was super in strong female figures. Loved to read books as a child about Ancient Egypt and was totally mesmerized by Nefertiti and Cleopatra. I Also loved Xena the Warrior Princess and Buffy the Vampire Slayer on TV. Later I studied Philosophy and Literature and dived deeper into a world of Greek and Roman philosophy and history and felt in love with Ovid, Socrates, Plato, Aristotle and the whole old world stuff. The only thing that always disturbed me: It was just men speculating on meaning of life and all human belongings. Where the fuck were the females? Mostly everything was about great men doing great things like Odysseus and all the big boys. Women were just attachments, evil – or the reason for a war. Like Helen. So I started to seek for the interesting female characters…and found the Crestfallen Queens...

4.What are some of the other lyrical topics and subjects you have explored with the music so far?

E: Our concept is to tell “herstory” not history. Each song is an homage to all the crestfallen queens in human history and their struggle with life and death and existence itself. We tell their stories to bring them back to general awareness. By doing so it becomes apparent that the struggles of these women were not unlike the issues modern people have: loss, anxienties, drugs, existential crisis, love, human abysses, empowerment and death. Let’s take “Queen of Swords” for example: There is a marble relief in the British Museum commemorating the release from service of two female gladiators, Amazon and Achillia. Until the relief was founded no one thought of women fighting in ancient arenas. How crazy is that? Fighting women were so “twisted” to society that they were erasured from human history – except this single relief. So the song is about two female gladiatrices fighting in an Roman arena. Normally one gladiator kills the other. Or they could beg for mercy. But the special thing here with Amazon and Achillia is that in this darkest moment of surrender (by putting the helmet on the ground) the other one also dropped her helmet to set an example: By doing so she’d shown solidarity with the weaker one – no matter if that meant death for both. So it is a song about female solidarity in unhuman times of misogyny and cruelty.


5.What is the meaning and inspiration behind the name 'Crestfallen Queen'?

A: With Crestfallen Queen, we tell long forgotten or even non-told stories about crestfallen queens that suffered a tragic fate during their lifetime. Our idea is, to give them another chance to speak up and tell “herstory” through us.

E: "Queen of Swords" is full of passion and devotion, which is impressively underlined by the hand-drawn cover artwork of the Peruvian artist Jose Gabriel Alegría Sabogal. We were fans of his work long before doing the album and decided to ask him to do our artwork because his work fits perfect to our lyrics and band concept. It’s full of iconographic hints and speaks through them. Every little sign has its own meaning. Nothing is left to chance here. But we refuse to explain everything. The artwork speaks for itself and is a visual interpretation of the world we created in our music.

A: Up to now, we’ve  played 5 shows. Each time we try different set/show elements to see what works best, putting our music in the right spot.

A: Other than our upcoming release show on May 25th we have one in Rostock and one in Berlin. Both at the end of September. There is definitely one more to come in 2019...and it will be in Stuttgart.

9.The new album is coming out on 'The Church Within Records', can you tell us a little bit more about this label?

A: We are really happy that Oli helped us to release our first LP. It is important for us, to be able to reach the right people with our music. Therefore, Oli is the right guy to make that happen.


10.On a worldwide level how has the reaction been to your music by fans of black, doom, heavy and progressive metal?

A: we were quite surprised that our demo tape sold that well. out of that, we assume that people like our music, which always feels great.

11.Before we wrap up this interview, do you have any final words or thoughts?


A: Big thanks to everyone supporting us!

Posted by OccultBlackMetal at 3:24 PM