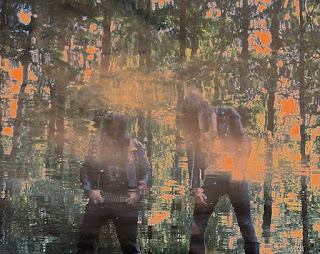 We’re a duo musical entity spawned from the gutters of Nürnberg, Germany. The band was formed with the urge to project individual personal and artistic ideas to a certain kind of music. In the beginning Vitriol experimented with different lineups to form a full band. However our efforts in that regard came to no avail yet resulted in the recording and release of our 2016 demo record.

2.You have a new ep coming out in April, musically how does it differ from your previous demo?

Our current EP ‘Chrysalis’ should be released by now. It contains two songs with a total playing time of over 20 minutes. It’s very different in many aspects compared to our first demo. The demo was a huge learning process for us, which helped us to figure so many things out, musically, productions-wise, composition-wise, artistically. The music and riffs on the demo were to some degree pre-Vitriol stuff and mostly written by only one of us, whereas we were both equally involved with the creative process that ultimately led to the recording of our second musical output. It reflects both of our visions and influences yet draws heavily from the experience we gained from the demo writing and recording process. I´d consider the record a much more versatile and experimental continuation of the foundations we built with our demo record – striving for improvement in every aspect.

3.You refer to your music as being 'cryptic metal carnage', can you tell us a little bit more about this term?

In the first place it wasn´t much more than a cool-sounding catchphrase we printed on a few flyers to promote our demo record but I suppose it kinda sticked with us, albeit unintentionally. The ‘cryptic’ should reflect our intention to produce music which is not accessible from the very first listen, demanding effort from the listener. And the ‘carnage’ reflects the rough, dirty edge of the music...That was sort of our reasoning back then. However, I wouldn’t put too much brain efforts into this whole moniker.

4.What are some of the lyrical topics and subjects you have explored on both of the releases?

Considering the bedlam writing process it´s difficult even for me to determine which influences guide me to pen down such lyrics. Words often come flowing free to me from nowhere by “listening” to the songs inside my head, others are distilled from the mind by force. So far I´d say subjects covered are a weird conglomerate of Philosophy, Natural Sciences, Zen Buddhism, Mythology.. Is there a message? Possibly. You decide.

5.I know that the band was named after an archaic name for a sulfate which is also used in the alchemy and occult arts, can you tell us a little bit more about your interest in occultism?

The history of the category of Vitriols has a certain dualism which reflects the dualism of our band and also of our lyrical topics pretty well. Pondering the moniker now, associations of a perennial quest for reunification, a constant search for purification immediately rise inside my head. A journey that will probably never meet its end, an embracing of death, hardship and decay, a celebration of life in all its facets and its transformative nature. That being said, albeit pondering such concepts might be an interesting exercise our interest in the occult or engagement in literal practices gravitates toward zero.

The cover artwork was done entirely by ourselves, which proved as a perfect opportunity to present our music visually as close to our concepts as possible. The process was quite time-consuming, not least because neither of us is a visual artist or graphic designer – which makes our satisfaction with the result even greater.

7.Currently there is only 2 members in the band are you open to expanding the line up or do you chose to remain a duo?

Currently there are no plans to extend the band.

8.So far the band has worked with 'Hellthrasher' and Iron Bonehead Productions on the releases, do you feel both labels have been very helpful when it comes to getting your music out there heard?

Hellthrasher provided us a great opportunity to release our demo on CD and to give this release a different visual outfit compared to the tape release which was done by ourselves.
The work with Iron Bonehead is extremely pleasant and professional. We are very thankful that Patrick is providing us the opportunity to release our abhorrent visions on CD and Vinyl in an amazing quality.

We literally sold copies of the demo to almost every continent, which suggests that we hit some nerve on that.
The EP hasn’t been released that long ago but our impression is it was received pretty well. Anyway, reviews or ratings are interesting to see what our music is triggering in other persons minds but is nothing that would ever affect what or how we do things.

There are no plans to be spoken about yet but there is still plenty of musical and lyrical topics Vitriol has to discover. Since its inception the band has been subject to constant metamorphosis in every aspect, a process we don´t always seem to have full control over ourselves. Despite the fact that we´re currently living in different european countries we´re already looking forward to recording new music, even though the distance will force us to change our approach towards pretty much all creative matters.

Both releases have some specific influences here and there but being mostly rooted in Death Metal. However, we always try to let the different influences not to become too strong and put different musical sources of inspiration into it too. Besides of the Black and Death Metal of the last few decades we don’t limit ourselves in terms of different musical genres. When writing the EP we were especially listening to a lot of 50thies and 60thies Jazz and some modern interpretations.

Thanks for the interview. New releases will come your way, sooner or later, so stay tuned. 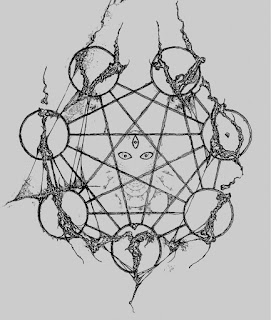 Posted by OccultBlackMetal at 3:02 PM