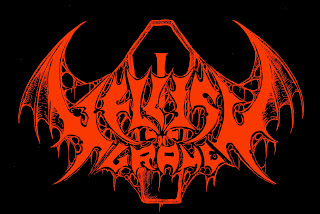 The answers are from Speed Demon (Drums) and Angelcörpse (Vocals)


Speed Demon: Yes, of course. We’ve been rehearsing and playing live in some underground venues here in Brasil. We also already doing one or another new song for a future release.


2.You have a new album coming out in May, musically how does it differ from the stuff you have released in the past?


Speed Demon: Well, I think that there is a lot of things that are part of our nature, that is part of our essence and is a continuity in some way, like the heavy metal mix with black metal. I think that what broken and differs from past release are the more mature production, refreshing mix on the heavy metal/black metal mix, giving some classic metal touches to it, in the veins of Iron Maiden, Judas Pirest and Mercyful Fate.


3.According to the facebook page you refer to your music as being 'Ancient demonic metal', can you tell us a little bit more about this term?


Angelcörpse: Well, it's just a denomination we put on the page (not seriously) referring to the roots of Death / Black metal that disseminate in the 80's, and all bands that used themes related to satanism and occultism in general, in which they became important references for the bands that appeared later using this obscure artistic theme.


4.Some of your lyrics cover occult and blasphemous topics, can you tell us a little bit more about your interest in the dark arts?


Angelcörpse: Since I started to write, I always have certain obsession about this specific lyric themes. Nowadays, we are boarding the occultism more seriously, based on some things we read or about dark and insane feelings hidden in society. We have some songs that portray the horror in classical literature, from consecrated names like Bram Stoker, Frank De Felitta and H.P. Lovecraft. From the new album, we have “Lust For Youth”, based on Oscar Wilde’s Novel The Picture of Dorian Gray and in “Hell No Longer Waits” the lyrics is based on the Golgotha Falls by Frank De Felitta.


5.What are some of the other lyrical topics and subjects you explore with the music?


Angelcörpse: We have some songs that board the “headbanger pride” on the lyrics. On the debut album, “(We Are) Hellish Dogs” is about the metalhead union force represented by that each one defend and believe, anyway, the same cause that keep tha flames of this insane music alive in nowadays.


6.What is the meaning and inspiration behind the name 'Hellish Grave'?


Angelcörpse: When we talked about the name on the beginning, we wanted something "sepulchral", referring to the old school music and morbid metal roots. Hellish Grave is about something weird / supernatural that will arise from the grave, this is the message in the artistic concept.


Speed Demon: It was done by Fernando JFL, an great artist here in Brasil, and we think that he captured the whole idea of what we wanted, that was an oldschool, simple and plain art that synthesizes our essence. Not much digital touches, but an art itself, with an priest falling from a church tower, with an classic “grim reaper” apparition on it, the real ones will get the reference. 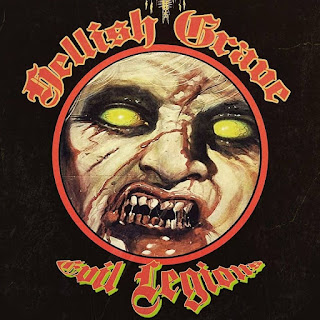 
Speed Demon: Some of our major experiences where in some far away from our houses shows. We played recently with one of our major influence, Bulldozer in Guaru Metal Fest, and that was an great show for us. Also we played with Nocturnal (great guys, cheers!) in Brasília, Capital of Brasil, among with another friends of Mortage, and some others. We also played this year an great show at Pomerode / SC, that was recorded sound and image, that we may use at some point. This was an great show with friends of Necrogosto (cheers), Creptum and Amem Corner.


9.Do you have any touring or show plans once the new album is released?


Speed Demon: We are currently planning an intense show schedule after the release to promote the album. Soon we will be releasing that dates. Till now, only dates in Brasil.


10.On a worldwide level how has the reaction been to the newer music by fans of black and speed metal?


Speed Demon: Well, in a worldwide level is a little complicated to state. We got a hell lot of support, and we thank so much all of our supporters out there! Here in Brasil we can talk a little more, because we live it. The support and reception had been great!! People always ask from copy of the new álbum (that is not released yet!). We hope everyone hear and feel the same energy as us producing the record and somehow link with the sound, that is totally made by heavy metal maniacs for heavy metal maniacs.


11.What is going on with some of the other bands or musical projects these days that some of the band members are a part of?


Speed Demon: Well, they are still rolling on. In some shows some members play in two bands haha. Cost effective!


Angelcörpse: Actually, I have a thrash/speed metal project with a guy that played guitars in Cemiterio and Infected on the past. We already recorded and mastered our first album that will release probably on this year!


Speed Demon: Into some more morbid and obscure sound, as the master command. Also, we are focused in some even more mature production and execution of the song by us.


13.What are some of the bands or musical styles that have had an influence on your music and also what are you listening to nowadays?


Speed Demon: We are 100% inspired by the real heavy metal, total underground worship. We are heavly influenced by Vulcano, Sepultura, Sarcofago, Dorsal Atlantica, Possessed, Motorhead and Iron Maiden. We are actually listening to a lot of stuff nowadays. Each one of the members has an personal listening. As what come to myself, (speeddemon) Im listening to a lot of obscure NWOBHM acts of the 70’s and 80’s (like Traitors Gate, Saracen, Ritual, Desolation Angels, etc), also some prog from 70’s as Rush and Genesis. I am into the newer Possessed álbum, that is totally killer, and some brasilian bands as Necrogosto, Profundezas, Vazio, Murdeath, Atlantis, Amurians, Harpago and Açoite (hehe).


Angelcörpse: In the beginning our main influences come from Venom, Hellhammer / Celtic Frost, Possessed and Sarcofago. I personally inspired in the great master King Diamond on the stages. As the others important frontman like Bobby Liebling (from Pentragram), Dead (from Mayhem), and Angel (from Vulcano). I always listen the good death metal old school bands (one of my many favourite subgenres) from any part of the world, and traditional heavy metal bands too. Some of doom metal bands like Black Sabbath masters, Candlemass, Witchfinder General and Cathedral they are always destroying my ears too!


Angelcörpse: Thanks a lot for the interview as the important opportunity, we hope to be able to play and bring our macabre songs around the world in the not so distant future. Till there, keep your minds insane and true! 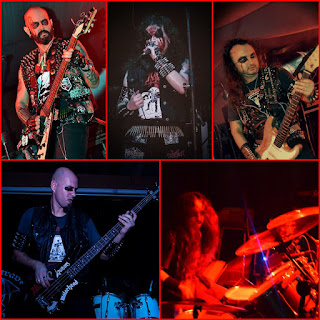 Posted by OccultBlackMetal at 11:31 AM