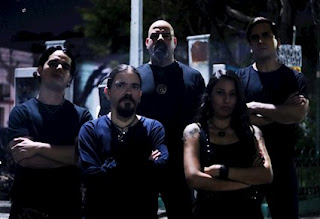 1.For those that have never heard of you before, can you tell us a little bit about the band? The band originally formed in 1995 in Monterrey México, with Carlos Velazquez on lead guitar, Luis Galindo on keyboards and vocals, Diego Galindo on bass guitar and David Benavidez on drums.The band was active from 1995 to 2000 playing gigs in Monterrey and Saltillo’s underground scene.  In 1999, Luis moved to Germany to continue his medical studies, and Hagel ceased to exist. In 2014, Carlos joined forces with Juan Reyes (Buzrael) on drums , Ivan Saldaña (Alpha Hydrae, Hyborim) on vocals and guitar and Elizabeth Castillo (Spit on Your Grave) on bass and reformed the band. Finally in 2018 , Luis Galindo returned from Germany and  rejoined the band after almost 20 years. We started recording in 2019, planning to release the album in 2020, but all hell broke loose around the world, and we had to postpone it.

7 of the 8 tracks included in the album were originally composed between 1995 and 1997. “Whims of a God”, the last track on the album is the first song composed by the new lineup, which in our opinion captures the essence of the new Hagel, and the sonic future of the band.

2.In May you have your first full length coming out, musically how does it differ from your previous demo's? Our first demo consisted of 4 songs, which are also included in our full length. The difference is that we reincorporated keyboards in all of our songs, when Luis rejoined the band in 2018. The demo has rawer versions of the songs without keyboards.

3.The band was broken up for 14 years, what was the cause of the split and also the decision to reform? In 1999, Luis moved to Germany to continue his medical studies, so without one of its creative halves, there was no point in continuing with the project, and Hagel ceased to exist. Carlos’ decision to reform the band was mostly to resurrect the project and  share in a more refined way what was done in those days, without losing the essence of that era.

4.While the band has been back together since 2014 you waited until 2021 to release an album, can you tell us a little bit more about the long wait? The band reformed with only one founding member, so it took us some time to reform the lineup and remake all the songs. Once we were complete, we started playing some gigs and started recording a demo. We all have different musical projects so it was hard to coordinate schedules. During the recording of our full length album, we had to stop for some health and personal issues within the band, also Luis returned from the bavarian lands, and rejoined the band so we had to wait a lit bit more in order for him ro rearrange and record the keyboards. We were planning to release the album in 2020, but as we all know, everything came to a halt worldwide, so we had to wait for more than a year to release it.

5.What are some of the lyrical topics and subjects the band explores with the newer release?The lyrics revolve around a wide plethora of topics, one of the most prominent is the scorn towards typical human behaviors like organized religion. The idea of worshipping a god that punishes you for following the instinct he himself planted into you is both ironic and repulsive, I consider it to be a closeted masochistic behavior. Besides that, lyrics are also inspired by the works of artists like Clive Barker (in labyrinths of flesh) or other interesting topics such as astral projection.

6.What is the meaning and inspiration behind the name 'Hagel'? The word “Hagel” comes from inverting the vowels on “Hegal”, the 27th name of Marduk,  master of the arts of farming and agriculture. This was taken from “The Book of Fifty Names”, inside the Necronomicon.

7.Can you tell us a little bit more about the artwork that is presented on the new album cover? All the artwork comes from a very talented Russian artist, Vergvoktre. We have been following his paintings for some time now, and we believe that his aesthetic fits perfectly with the band’s sonic aura.

8.What are some of the best shows that the band has played so far and also how would you describe your stage performance? Well, we have had many good performances in these past years, especially when we’ve had the opportunity to play in different cities across Mexico. One of our best performances was the time we opened a show for Ragnarok in Monterrey, Mexico, great venue, great band, and great audience all around. WE could say our stage performace is energetic and dymanic, once we get going, its fucking on! We give absolutely everything we’ve got no matter if we play for 2 people or if we play for  2000.

9.The new album is coming out on 'Personal Records', can you tell us a little bit more about this label? Personal Records is a Mexican record label, out of Queretaro, Mexico, that supports underground metal bands worldwide, revolving around doom metal and its derivative forms. They’re a very serious and well organized record label and we are really excited about partnering with them.

10.On a worldwide level how has the reaction been to your music by fans of atmospheric black and doom metal? It's been really good so far,  in the short time we have been working with Personal Records we have been receiving very positive reviews about our work, from different parts of the world. We also have been very well accepted in Eastern Europe, specifically in Rumania, where we have forged great friendships.

11.What is going on with some of the other bands or musical projects these days that some of the band members are a part of? In the last year as the world went   At the moment each of us has been working with our other bands, writing new songs and basically just preparing our next productions. There was really not much to do during this past year,because of the confinement, so hopefully next year we will have new stuff.

12.Where do you see the band heading into musically during the future? Well, we are definitely keeping the music dense and heavy, we’re incorporating baroque structures in some of our new songs, but without loosing the aura of what was done in the 80s and 90s

13.What are some of the bands or musical styles that have had an influence on your music and also what are you listening to nowadays? In the early days  Ophtalamia, Mortuary Drape, early Moonspell, early Rotting Christ, Samael, Tiamat and  Cemetary were some of the main influences behind the band’s sound.  Nowadays the influences are very much the same with the current lineup, with the addition of newer ones such as Empyrium, Uaral, A Swarm of the Sun and Arkhon Infaustus, just to mention some.

14.Before we wrap up this interview, do you have any final words or thoughts? First of all we want to thank you for the interview and for giving us the opportunity to talk a little bit about the band. We would also like to thank Jacobo Córdova at Personal Records for believing in us,  for believing in the music, and for  helping us share it with more people around the world.  We hope you like our album and we are looking forward to sharing with you our future productions. 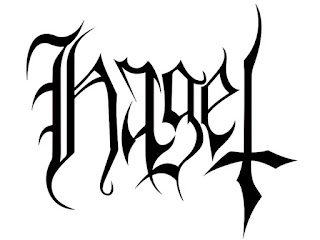