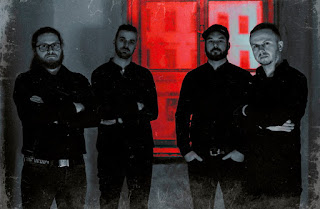 After a short break, the band prepares recorded material for live performances,

we started working on a music video for our debut album and we're composing  new songs.

2.You have a new album coming out in June, musically how does it differ from the stuff you have released in the past?

From my point of view, the songs are much more elaborate, more complete, as a whole it sounds much more progressive.

Lots of new elements and layers that we haven't used in the past.

3.Most of the band members where in 'Born Again', what was the cause of splitting up that band and starting a new one?

The previous band ended after twelve years, when we felt that there was nowhere to move musically and the atmosphere inside the band was also not ideal.

Our texts are mostly written on an abstract level and describe various spiritual visions of man. I think our progress in writing songs is great, there is a good atmosphere inside the band and that is very reflected in the writing of new songs. We currently have all the studio equipment for independent creation, production and recording. This gives us a lot of space and freedom to express ourselves in our music.

5.I Know the band name came from 'The Mothman Prophecies', can you tell us a little bit more about your interest in this novel and also do you also have an interest in John Keel's other novels or similar authors in that field?

The encounter with this story was accidental.

Many years ago, I saw a film based on this story and I was very interested.I had the name Indrid Cold in my head for years, and I knew I would use it one day.

We thought for a long time about how to process the album cover.We wanted something symbolic and unified in colors and we are very satisfied with the result.

It is a purely abstract expression of the album's title.

We have played several successful events, but so far nothing significant for us.

8.The new album is going to be released on 'Sliptrick Records', how did you get in contact with this label?

We contacted them ourselves.We searched for a long time and we wanted to get our music more into the world.

Sliptrick Records were interested in our music and offered us good conditions for the release of our album.

9.On a worldwide level how has the reaction been to your music by fans of black, doom and post metal?

We usually received a positive response to our older work, but we focus more on current work and look forward to the release of the album.

Our current musical expression suits us perfectly, so we will develop it a bit.

We want to thank you for this interview and we hope you enjoy our new album, which will be released soon.

Posted by OccultBlackMetal at 5:58 PM