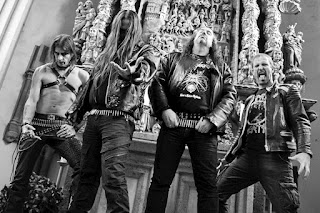 Weill, I´m just doing this interview on release date, Friday, the 4th of June! We are very happy that the album is out right now! We´ve started with the recordings in october 2020 and finished mixing the album in early January 2021, so we had to wait half a year till the release which was a pain in the ass! We were hot to get the response from the fans and see if they will like it. But the wait is now over and the first response is so overwhelming that I really feel good now!!

It doesn´t differ musically because we are always sticking to our very own style. The only things that changed a bit is first of all the drum work on the new album. Our new drummer hont is very skilled and brought some fresh and new elements to our sound. The other thing is the sound of the album: this time we wanted a more old-.school and natural sound and I think we managed to achieve it!

3.This is also your first full length in 5 years, can you tell us a little bit more about what has been going on during that time frame?

Well a lot of things happened during the last 5 years. The most notable event was of course the change of drummers in 2018! Our old drummer Tormentor had joined ASPHYX and trhe even also SODOM, so it was impossible for him to rehearse regulary with DESASTER. It was a hard decision for us, but after over 20 years we had to walk different ways. Hont, who had played together with singer Sataniac in a band before took over the drum sticks and is a permanent band member for 3 years now. In 2019 we released a special 7“ single to celebrate the band´s 30th anniversary and there he can be heard for the first time on the songs „Black Celebration“ and „Primordial Obscurity“. The second one was an appetizer for our new album and is (re-recorded) also included there!

4.What are some of the lyrics and topics the band explores with the newer music and also how would you describe your progress as songwriters over the years?

Well, in the past our lyrics dealt with anti-christian themes but also with middle-ages, castles, battles etc...Sataniac´s lyrics nowadays are still anti-religious, but on another level, it´s more philosophical without beeing pseudo-intellectual. As songwriters we have improved a lot during the years. In the past there was always a lot of „trial and error“ while writing songs, but nowadays the songwriting usually is more straight to the point, more sprirtual and more effective!

5.Over the years you have also covered some satanic themes, can  you tell us a little bit more about your interest in the dark arts?

Well, when I satarted listening to Mtal in 1986 I soon was fascinated by all the „evil“ bands, especially the lyrics of the King in Mercyful Fate attracted me much! And when we founded our own band in 1988/1989 it was clear from the beginning that we also wanted to walk the „left hand path“ lyrically! We never claimed to be Satanists but we had anti-christian lyrics like „Sacrilege“ & „Devil´s sword“ etc...Our western world is still ruled by religious institution like the catholic church and we still fight against those false prophets and „saints“ who want to tell the üpeople what to think, believe and do!

6.How would you describe the cover art that is presented on the album cover?

The cover shows the rotting saints which were banned from the church behind them. The deeper meaning is that people should get rid of all those false saints who want to suppress them. I like the artwork very much, it´s made by Marcos Miller from Brazil!

7.The band has been around for more than 30 years, what is it that motivates you to keep going after all these years?

We still are an underground band that only meets when we want to. There´s no pressure from a record company to release an album every second year, go on tour for months and the same again and again! We only play selected shows with bands we like and when we think there´s the time for another DESASTER album we do it! This freedom is the main reason why we are still around and why we still have the flame burning!

Our stage performance is vere energetic. We like to play live very much, what can be better than to bang and drink together with the fans ?! I think every real Metal band must be able to perform their music also live on stage, you can produce everything you want in a studio but you also have to produce the same atmosphere on stage if you want to be called a real „band“.

Of course the best shows are when the audience is totally freaking out, you know: headbanging ´til neckbreaking! I can´t understand those people who pay the entrance to stand in a corner without moving at all! I go to a conceret because I like the bands that are playing, I want to enjoy the show together with my friends, have some beers and bang like hell !!! But most DESASTER-gigs were very good so far, DESASTER on stage - CHAOS in front of the stage, that´s how it should be like ! AAARRRGGGHHH !!! One of the best shows ever was a gig in Serbia where the fans couldn´t speak english so they didn´t know our lyrics but were singing along my guitar tunes! That was fantastic, harhar!

9.A few years back a few bands got together to cover your songs and do a tribute album, what are your thoughts on that release?

Of course we were very proud of that! It was a project from fans of the band and we liked the outcome very much! To listen to how other bands interprete our songs was great and we enjoyed that!

10.On a worldwide level how has the reaction been to your newer music by fans of black and thrash metal?

Well the response is becoming bigger and bigger, I think we never had so many interviews, reviews & requests before! And it seems like the fans like our new album, those who heard it already wrote us and said it is a killer one! Of course there are also those who only like the first albums but that´s also okay for me! With some bands it´s the same for me!

We will do always the same, harhar! No progression at all is our slogan! But I think our aim is always to write an album with all the desastrous trademarks in it in a good balance!

Well, I listen to a lot of old classic stuff but also like some „newer“ bands like MGLA from Poland.

In those days it´s very important that fans support the bands who earn their living with music! So please support them and help them! If then there´s some money left feel free to buy the new DESASTER album, otherwise just steal it, hehe!

Master of the six silver strings of hell

Posted by OccultBlackMetal at 4:56 PM