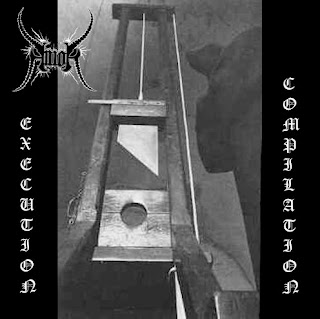 Amok are a band from Norway that plays a mixture of death, black, thrash metal and grindcore and this is a review of their demo compilation "Executuin Compilation" which was released by Misantrof ANTI Records.

Drums range from slow, mid paced to fast drumming with a great amount of brutal sounding blast beats being thrown into the music, while the bass playing has a very dark tone with riffs that follow the riffing that is coming out of the guitars and the sound more powerful on the later demos that are present on this compilation.

Rhythm guitars range  from slow, mid paced to fast riffs that combine influences from black, death, thrash metal and grindcore to create a sound of their own while the lead guitars when they are utilized are very chaotic sounding death/thrash guitar solos and leads.

Vocals range from deep death metal growls to high pitched black metal/grindcore screams along with some samples, while the lyrics cover violent, war and hateful themes, as for the production it has a c ery dark, raw and primitive sound to it.

In my opinion Amok are a very g reat sounding black/thrash/death metal/grindcore hybrid and if you are a fan of this style, you should check out this band. RECOMMENDED TRACKS INCLUDE "Nuclear Warbeast" "Skullfucked" "Organized Hate" and "Toxic Slayer". RECOMMENDED BUY.

Posted by OccultBlackMetal at 10:20 PM